Data is increasingly recognized as the most important asset of a business. As the amount of unstructured data steadily increases, management and protection can be a complex and costly process. vSAN native file services simplify unstructured file-based data management with support for SMB and NFS. vSAN 7 U2 extends its file service capabilities including support for stretched clusters, data-in-transit encryption, snapshots, and improved scale, performance, and efficiency.

One option for backing up vSAN file shares is to configure the NFS\SMB file share as the backup source and let the backup software pull the files to the designated backup repository. 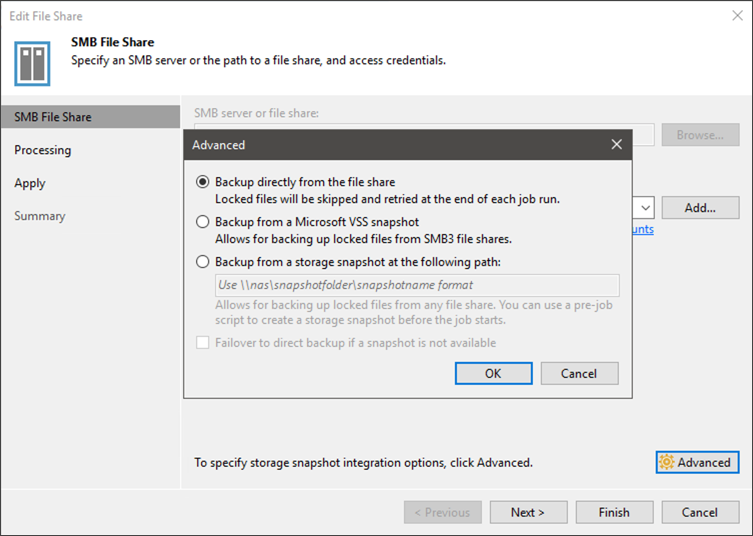 One of the key considerations with this approach is that locked files will be skipped. Some backup software vendors will retry the skipped files before finishing the job, but if the file is still locked, the file will ultimately be skipped. There is also the potential for performance impact as the backup job will generate IO on the production file share.

These are a few of the key reasons VMware now offers support for vSAN Distributed File System (VDFS) snapshots via API. Backup vendors are currently working to support the use of VDFS snapshots as a backup source. Until then, organizations wanting to utilize VDFS snapshots today have a few options:

vSAN File Services has a built-in feature that allows you to create a read-only snapshot of a vSAN file share. When the vSAN File Service is enabled, you can create up to 32 point-in-time snapshots per share. They can be created and deleted from the vCenter UI, and managed by browsing to a hidden folder in the file share path. (\\file-share-path\.vdfs\snapshot).

In the illustration below, a snapshot of the file share Profiles was created and named “veeam-backup-061721-1009”. 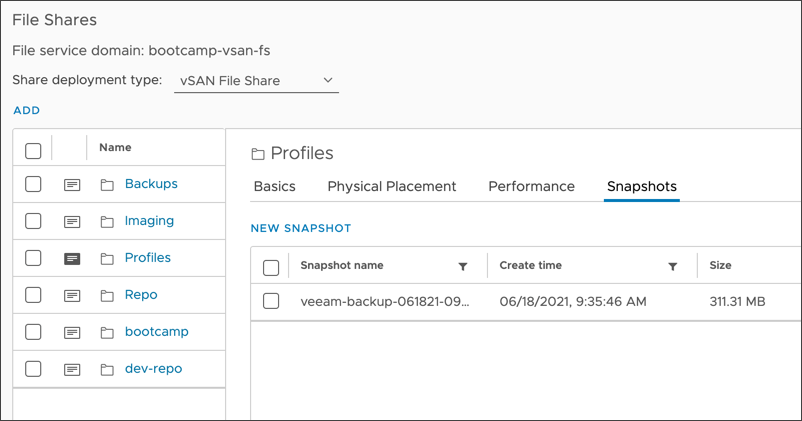 In the backup software, the path to the snapshot was added to the advanced properties of the file share. Now, any backup job that protects the Profiles share will know to use this snapshot as the backup source. 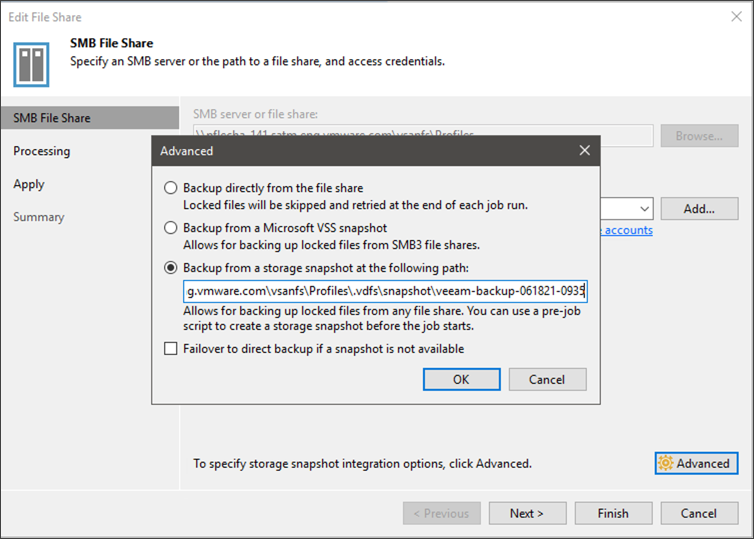 Manually creating a snapshot and configuring it as the backup source is technically possible, but it's not scalable. For scheduled backups, there needs to be a new snapshot created before each backup interval.

While backup vendors work to incorporate the logic to generate snapshots and use them as the source for backup, this can be achieved today using PowerShell and PowerCLI.

Recently PowerCLI 12.3 announced support for vSAN file service snapshot management. There are 3 new cmdlets below that can be used to manage VDFS snapshots. These cmdlets can be used to create and present VDFS snapshots as a backup source. The snapshot script can be invoked as a pre-job task to ensure that every backup job creates a new snapshot and uses it as the source for the backup.

Example Scenario: Use VDFS snapshot as a source for backing up a file share

This objective can be achieved using PowerShell and PowerCLI cmdlets.

Step 2: Create a PowerShell script that accomplishes the following:

For the best performance experience, VMware recommends an interval of more than 1 hour between snapshots.

Note: An example of this script can be found here. As with all sample scripts, they are meant as an example only. Use at your own risk.

Step 3: Add the script to the backup job 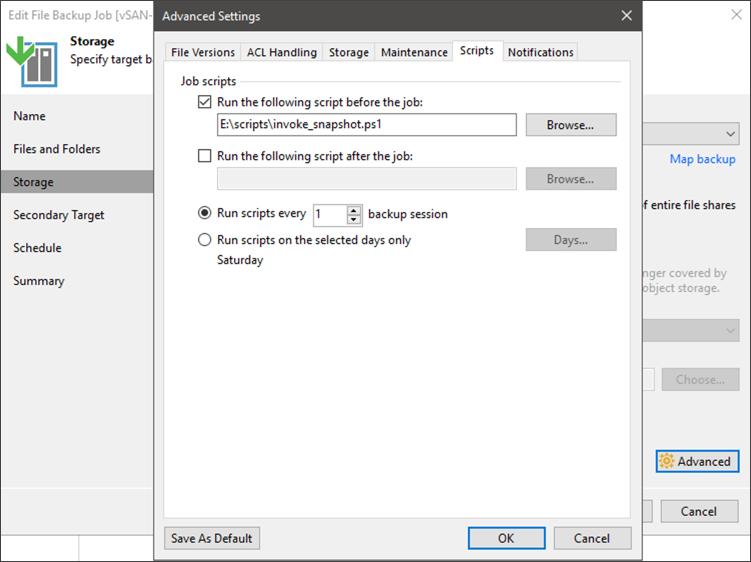 Note: To take advantage of the new vSAN file services snapshot cmdlets, install the PowerCLI module on the backup server. Veeam’s Backup PowerShell module is installed as part of Veeam Backup and Replication.

When the backup job kicks off, the pre-job script creates a new VDFS Snapshot and identifies it as the source for the backup Job. Veeam’s Changed File Tracking maintains the footprint of the source file share and is stored in a cache repository. The cache repository keeps track of all objects that have changed between each backup, resulting in super-fast backup processing for the file share.

This is just an example of how the new vSAN file service cmdlets can potentially be used to help organizations wanting to use VDFS snapshots today, while waiting for this logic to be built into their backup software.

There are a number of ways to restore a vSAN file share. Be sure to check the restore options for your backup vendor. For example, Veeam Backup and Replication v11 (used in demo video) offers the following restore options:

File Services in vSAN 7 Update 2 offers the ability to manage snapshots of SMB and NFS file shares. Snapshots can be managed manually in the vCenter UI or with PowerCLI cmdlets. While backup vendors work to add vSAN file share snapshots into their software, organizations can use PowerCLI today to present them as a usable backup source. The result is space-efficient point-in-time snapshots with rapid granular recovery.

Special thanks to Jatin Purohit, for his PowerShell expertise and dedication to this project. He authored the vSAN_Snapshot script used in this post. A collection of his sample scripts can found at https://github.com/jatinpurohit92.