VMware as a company has always done something very well, Virtual Machines - and we believe, as well as the wider community that modern applications will not exist in isolation as Kubernetes-only apps, rather they will be made up of a mixture of containers, functions, VMs and as-a-service offerings.

However, the way in which VMs have historically been provisioned is somewhat the antithesis of what desired state and Kubernetes stands for, which makes those parts of a solution much less attractive overall than converting everything to containers.

With vSphere 7.0 U2a we will be changing that. I am happy to introduce the VM Service and VM Operator, these two components work in unison on vSphere with Tanzu to offer Kubernetes users a VM provisioning workflow, never before seen on vSphere.

VM Service has a whole bunch of goodies inside; from declarative Kubernetes CRD based VM provisioning, automatic load balancing across multiple VMs, industry standard cloud-init based guest OS customisation for dev users all the way to administrative controls for VM Images and VM Classes (think t-shirt sizing) for the vSphere administrator.

This is our first release of VM Service and the VM Operator (v1alpha1) so we would very much appreciate your feedback in helping to shape the future of this feature!

Without further ado, let's dive in.

What does it do

VM Service allows Kubernetes users to provision VMs and their guest OSes declaratively, that is to say in a desired-state manner, just like anything else that is managed by Kubernetes.

How does it work

The vSphere side is built right into vCenter, it allows you to manage VM Images (Content Libraries) and VM Classes (VM sizing), the Kubernetes side is called VM Operator which creates and services the Kubernetes Custom Resources (CRs/CRDs), which we'll get into later, and tells K8s how to talk to vSphere.

Additionally, we are happy to announce that we are releasing the VM Operator as a completely open-source component on GitHub, and you can find that here.

So, let's have a look at each of these components in detail and see what makes it all tick!

The vSphere side of the VM Service is very straight forward, it is created as part of your vSphere with Tanzu namespaces once you enable the service in the new Workload Management "Services" tab:

For more details on setting up VM Service - check out the documentation here.

Inside the VM Service, you'll find where you can manage the components, namely the VM Images (Content Libraries) and VM Classes (t-shirt sizes).

If we take a look at the VM Classes tab it'll give you a better feel for what these actually are - essentially at this point they are CPU and Memory presets as well as resource reservations that developers will be able to create VMs from - there are a whole bunch of presets available out of the box to get you started and should cover most use-cases, however, if you want to create your own you can do that too. 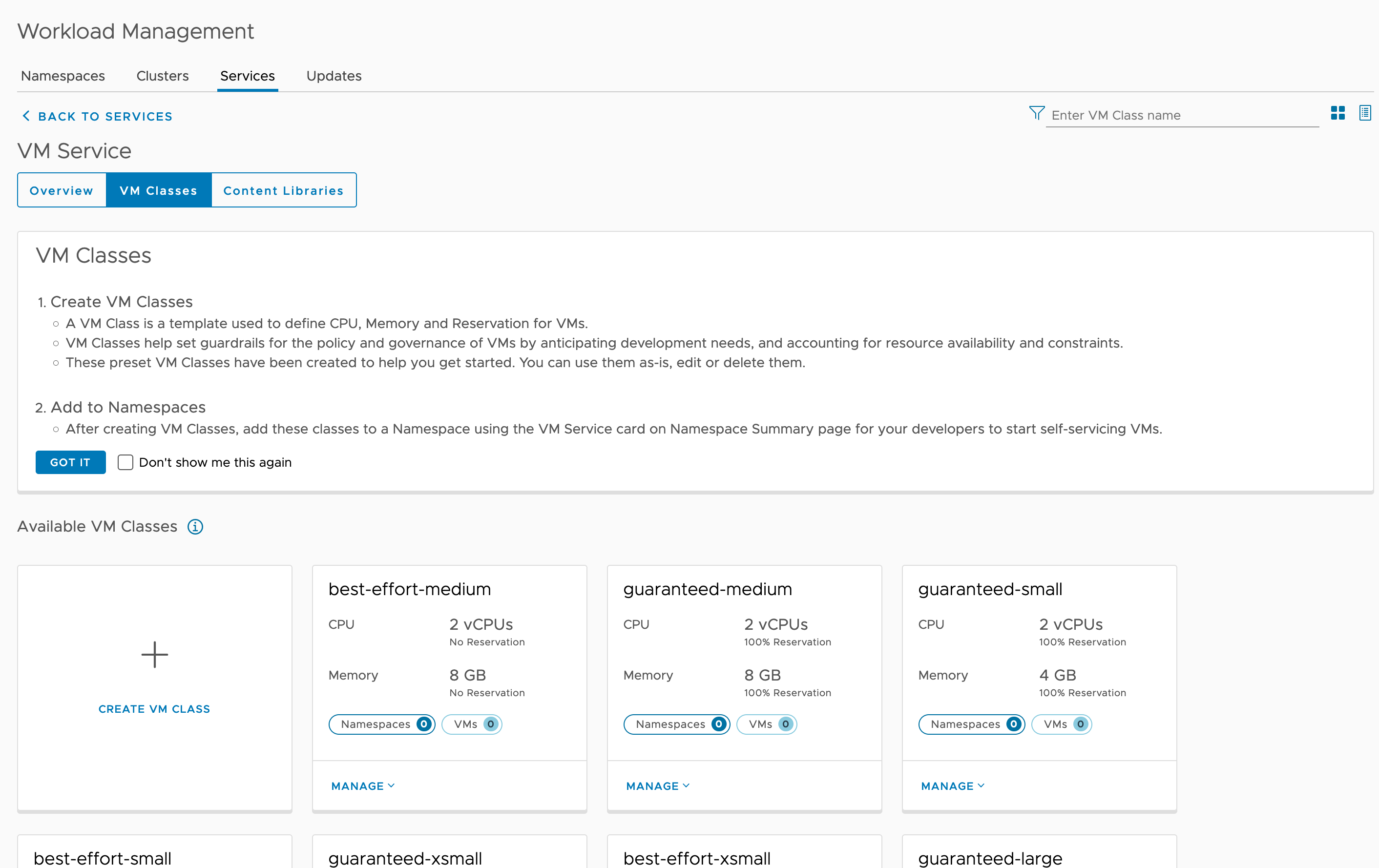 Next up, Content Libraries are where the images that can be used by developers are stored - so when a developer deploys a VM via a VM Image, the images available to them are pulled from these content libraries - we'll take a closer look at that in a bit.

As of this release of VM Service and VM Operator API v1alpha1 we are only supporting a subset of images that we have built to work with VM Service, this will be changing to be more open in the near future. The current image you can deploy from can be found here. 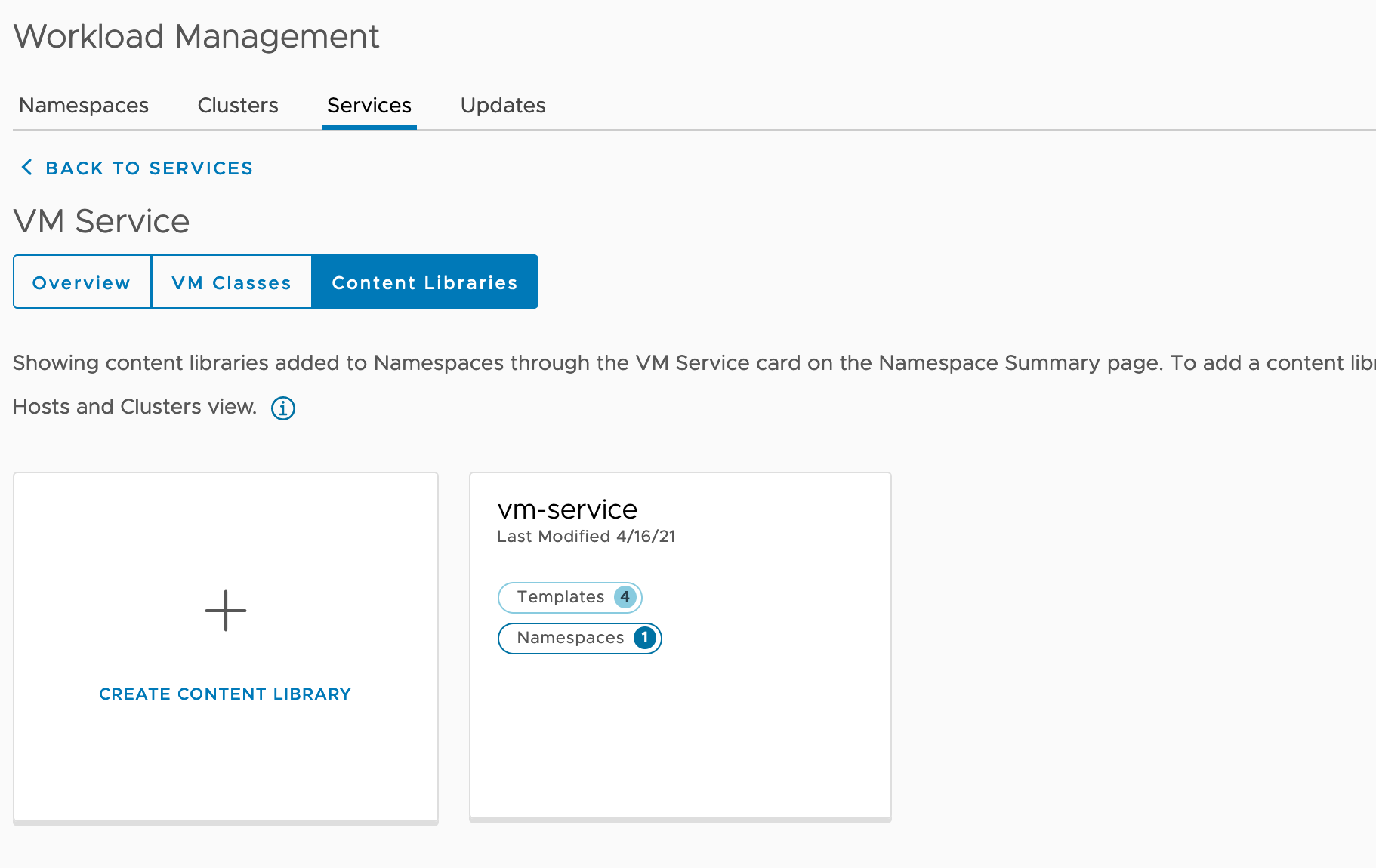 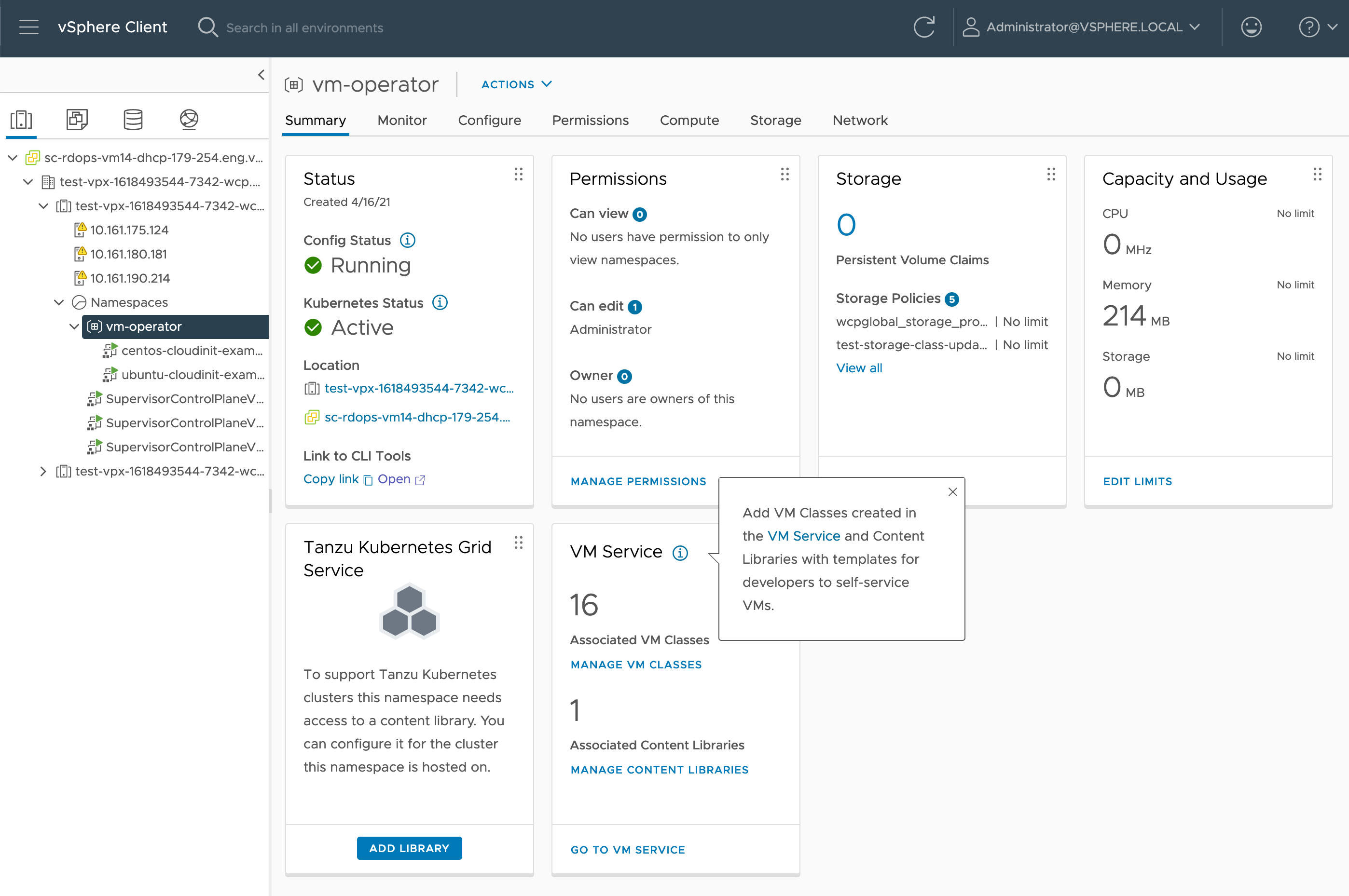 From here, we can now go have a look at the K8s user's experience of VM Service.

The VirtualMachineClasses type (vmclass for short) will show the K8s users what Classes they are able to choose to deploy their VMs against, for example: best-effort-2x-large, guaranteed-small, etc. When they use kubectl to query these they'll see the Classes that you assigned to them in the vCenter UI:

They can also ask for more info from these types as well by describing the object. Below, you can see the entire specification of the vmclass object type - expressing the CPUs and RAM available as well as any resource guarantees or limits imposed on VMs at the vSphere layer provisioned from these classes.

The VirtualMachineImages type (vmimage shorthand), allows the K8s user to query what images are available to them, in the Content Library we are distributing with this release there is one image: CentOS Stream 8. You'll also notice that when we query the available images it notes if the image is supported or not (by default, only the distributed images are with the first release, as I mentioned at the start, this will be changing soon, and we'd love feedback on what images would be most useful to you!).

Again, if we describe one of these images you can get some very useful information from them - like what OVF Environment keys are supported, allowing you to do one of the coolest things with VM Service - Guest OS Customisation.

As you can see from the above output, there are a few keys that we can populate to customise the Guest OS - but to me the most interesting is user-data - this allows native customisation of the Guest OS using the cloud-init specification as you would see on public clouds, meaning if you have a cloud-init user-data template that works there, it will work on vSphere too! We'll check this out in more detail in a bit.

The other main OVF key of note is hostname which, you guessed it, sets the hostname of the provisioned VM - everything else can be handled through user-data including; passwords, ssh keys, users, groups, package installations, running arbitrary commands - basically, anything.

Now, on to the main event - the VirtualMachine type (CLI shorthand: vm) of the types we've seen so far, the K8s user can actually create these, and that's the whole point! So, what I'm going to do is give you some example manifests you can use to try out the VM provisioning for yourselves, including some Guest OS customisation via cloud-init.

I've created a GitHub repo here with a bunch of example manifests in for you to play around with. I'll take the CentOS one as an example and we'll take it apart here to see how it works.

The network name to fill into the VM spec can be retrieved by querying the available networks in K8s (Note: the networkName stanza is not required if you use NSX-T, NSX-T automatically creates segments for you - simply set networkType: nsx-t):

We can, as usual, garner a bit more information by describing the object's spec:

When it comes to customising Guest OSes, the industry standard has become cloud-init, supported by every major Linux distro out there, it provides an easy way to get just about everything done on a VM at provision-time. We've built support for cloud-init into the VM Operator and as such, customising Guest OSes is as trivial as a few (more) lines of YAML.

Again, I've built out a few example user-data templates on the GitHub repo and we're going to take one apart here.

So, all in all pretty readable and simple - I highly encourage you to check out the cloud-init docs or the blog I wrote a while back on my personal site for way more comprehensive examples, including how to build a complete K8s node from scratch using cloud-init.

A testament to just how much easier this is now with VM Service is comparing the massive four part series I wrote on doing this manually before, from vSphere with admin creds - to a simple YAML manifest done with RBAC, quotas and security out-of-the-box.

With our cloud-init user-data file built, we simply need to convert it into base64 encoding and paste the output into the ConfigMap as in the YAML example above.

We've got our YAML built, so all we need to do is apply it and wait for the VM to spin up - if you're following along with the GitHub repo you should be able to apply this directly:

And we can watch the resources to see when they're ready:

And a little further to retrieve the IP address:

So clearly the DHCP request worked - let's log in, if all has gone well, I shouldn't have to put in a password as my SSH key is already trusted from the cloud-init customisation and I should be able to elevate to sudo without a password:

Additionally, there should be a docker group present on the VM:

If we have a look back vSphere side, we can see the VM successfully provisioned with the expected resource settings.

The last feature we'll look at is VirtualMachineServices (CLI shorthand: vmservice) this allows you to create a load-balancer that fronts one or many VMs - again, in the GitHub repo I've created an example deployment that uses everything we've looked at so far, cloud-init, VM objects and now a vmservice object to front two CentOS VMs running NginX, each with their own unique content.

So, if we take a look at the manifest and see how it works:

Not too much going on there, a fairly simple port 80 mapping right through to the VM, but the magic part comes from the label selector - this tells the VM Service how to choose what VMs are backed by the load balancer, so in this case it will look for any VMs with that label.

If we check the VMs we have in our environment that match that label, we can see there are two:

If we query the vmservice type, we can see the one we created above is present, and additionally if we query the standard K8s objects Service and Endpoints we can see the load balancer service that was created for us, it's external IP address as well as the IPs of the VMs that are backing that service.

Finally, if we curl the load balancer IP address, we can see that the HTML being served back changes, so clearly the traffic is being round-robined between the backend VMs.

Equally, if you add more VMs, or take them away - they will automatically get added to, or taken from, the load balancer - meaning that there is no manual reconfiguration of the load balancer objects needed because of our use of label selectors.

That about brings us to the end of our whistle-stop tour of the new VM Service and VM Operator in vSphere - as I mentioned at the start we would love to hear your feedback on this feature, what you like, what you don't like, what OSes are the most important to you and your organisation, pre-packaged apps distributed as OVAs, etc - send Nikitha Suryadevara (product manager for the feature) and myself a note on our Twitters and it will help us guide the future of this feature!

For detailed how-to style info, check the official vSphere documentation - also, don't forget to check out the VM Operator GitHub and give it a Star to keep up to date with the features and releases as they come out!

Until next time, happy VM provisioning!

For more info or questions on this, reach out to Myles on Twitter.