An Introduction to the vSAN Express Storage Architecture

Since its debut in March of 2014, VMware has a long and consistent history of turning innovative ideas into product features in vSAN.  But nothing may be bigger than what is introduced with vSAN 8.  The announcement of the VMware vSAN Express Storage Architecture™ or ESA for short, represents a massive step forward in the capabilities of the solution, and the benefits to our customers.  This has been achieved in a way that is largely transparent to the user, in the same product they are already familiar with.  Let's take a look at what the ESA is, why we built it, and how it will unlock new capabilities, new levels of efficiency, and performance for your workloads on-premises or in the cloud.

The best way to think of the vSAN Express Storage Architecture is that it is a new way to process and store data.  It is an optional, alternative architecture in vSAN that is designed to achieve all-new levels of efficiency, scalability, and performance.  The ESA is optimized to exploit the full potential of the very latest in hardware and unlocks new capabilities for our customers.  It is introduced in vSAN 8, and when using ReadyNodes approved for the ESA, can be selected at the time of creating a cluster.  The ESA in vSAN 8 is an alternative to the Original Storage Architecture (OSA) found in all previous editions of vSAN, as well as vSAN 8.

But why did VMware introduce this new, optional architecture in the industry-leading hyperconverged platform?  It is a fair question that deserves some explanation.

The Evolution of Hardware and Demands on Businesses

To better understand why VMware is introducing the Express Storage Architecture in vSAN 8, let's take a look back and revisit how the industry has evolved over the past decade.

A decade ago, spinning media was still the dominant storage device in the enterprise.  NAND flash was available, but it was expensive, small in capacity, and lacked high-performing interfaces that matched its capabilities, as the NVMe specification didn't debut until 2013.  Servers often had CPUs that had relatively few CPU cores.  1Gb networking was the dominant network speed, with 10Gb networking only found in a minority of use cases.  As a result, VMs were sized accordingly with typically 1-4vCPUs.  Guest operating systems and applications were still limited in their abilities to multithread.

Fast forward to today.  Thanks to the advances in NAND flash, today's modern MLC, TLC, and QLC NAND flash devices hold much more capacity while dropping dramatically in price, all while using an extremely fast and efficient NVMe interface.  Server CPU core counts have dramatically increased in recent years, and 25/100Gb networking is not only available but at prices per port that makes it the go-to for network refresh cycles.  Customers are asking their applications to do more by assigning more virtual resources to them while demanding data services such as space efficiency and encryption.  As if that weren't enough, the workloads are no longer relegated to an on-premises environment.  Customers are running workloads everywhere:  The edge, the core, and the cloud.

Figure 1.  Comparing the changes in the industry over a decade.

While modern NVMe-based flash devices have shifted the bottleneck away from storage devices, flash also enables new ways of writing data and metadata efficiently, at scale - particularly challenging as device capacities increase substantially.  VMware saw this evolution in hardware as an opportunity to do something revolutionary.

The Express Storage Architecture in vSAN 8 stands on the shoulders of much of the architecture found in OSA included in previous versions of vSAN, and vSAN 8.  vSAN had already solved many of the great challenges associated with distributed storage systems, and we wanted to build off of these capabilities while looking at how best to optimize a data path to reflect the capabilities of today's hardware.

The advances in architecture primarily come from two areas, as illustrated in Figure 2. 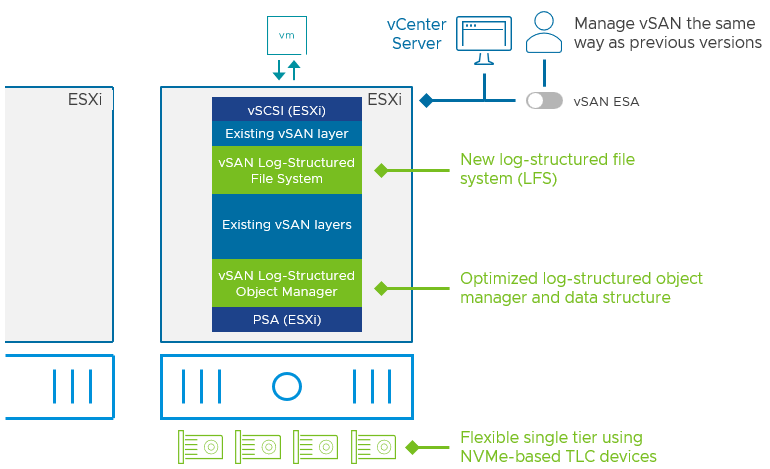 In many ways, the ESA is so much more than just discrete enhancements introduced in a layer of vSAN.  It allowed VMware to look at, and rethink how data could be processed more efficiently in the stack.  That is exactly what happened.  We’ve moved some data services to the very top of the vSAN stack to reduce the resources needed to perform these tasks.  For example, data is now compressed and encrypted at the highest layer to minimize process amplification.  Checksums are reused in an innovative way to minimize duplicate efforts.  Our LFS can write data in a resilient, space-efficient way without any performance compromise.  And finally, it allowed us to introduce an all-new native snapshot engine.  It is the combination of these capabilities that make the vSAN Express Storage Architecture greater than the sum of its parts.

We'll be elaborating in upcoming blog posts about the capabilities and unique benefits of the vSAN ESA, but here is just a taste of what it is capable of achieving.

Who is it for?

VMware believes the vSAN Express Storage Architecture is ideal for all of our customers and cloud providers moving to this latest generation of hardware.  Delivering space-efficient and highly resilient storage without any performance compromise, using all claimed storage devices for capacity, and new compression enhancements significantly change the mathematics in favor of the vSAN ESA.

Is the OSA going away?  No, not in the foreseeable future.  We recognize many of our customers have invested heavily in a wide variety of hardware, and customers can continue to use the vSAN OSA with confidence for those configurations.  vSAN 8 is a great example of how VMware continues to make improvements to the OSA, where we have increased the write buffer capacity up to 1.6TB, and made other feature enhancements.  Continuing to upgrade your clusters to the latest version of vSAN using the OSA is a great way to use your existing hardware most effectively.  New clusters can be configured with the ESA in mind, which will drive down TCO while benefiting from all of the capabilities that the ESA provides.

For more answers to commonly asked questions, see the FAQs for the ESA on core.vmware.com.

The vSAN Express Storage Architecture builds on much of what VMware has released that has made vSAN the number one hyperconverged solution on the market.  This is your chance to do more with what you already have, using the software you already know.