Data security can place a heavy burden on those responsible for security of their organization’s digital assets.  Regulatory requirements and reports of data leakage in the news provide ample motivation to take the matter seriously.  Administrators must secure this data, and one way this is achieved is through data encryption.

It is a great question, and worth exploring in more detail.

A Primer on vSAN Encryption Offerings

vSAN offers two types of encryption services to make the data in a vSAN cluster more secure.  For on-premises environments, both are optional cluster-level services that can be used independently or together which would offer a full end-to-end encryption solution.  In VMC on AWS, encryption services are enabled by default.

vSAN Data-at-rest Encryption.  Just as the name implies, this service encrypts the data as it is written to persistent media used for vSAN storage, and decrypts it as it is read from the datastore.  It does this using cryptographic modules in the hypervisor, and does not require any self-encrypting drives. For more information, see the vSAN Data-at-Rest Encryption Tech Note.

vSAN Data-in-Transit Encryption.  This encrypts vSAN traffic in-transit or "in-flight" across the hosts within a vSAN cluster.  This helps secure data that is transmitted through host uplinks that may be used for multiple traffic types.  For more information, see "Enable in-flight Encryption to a vSAN Cluster." 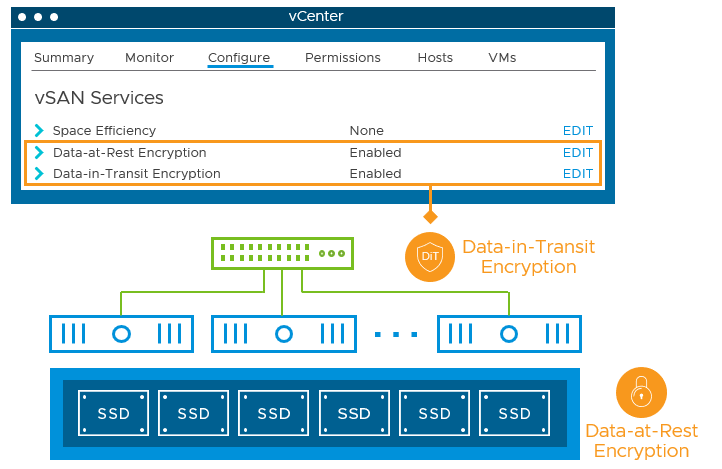 Both encryption services use the same FIPS 140-2 validated cryptographic modules found in vSphere, used by vSphere's VM Encryption. While outside of the scope of this article, VM Encryption is a feature of vSphere that allows for encrypting individual VMs and was primarily intended for traditional storage architectures.  To find the answers to many commonly asked questions around vSAN encryption services, see the FAQs on vSAN Security on core.vmware.com.

Recommendation.  Refrain from using the vSAN Encryption offerings in combination with vSphere's VM Encryption.  This would create unnecessary overhead for no real improvement in security and would diminish space efficiency outcomes when the Deduplication and Compression service is used.

Will enabling vSAN encryption services have a performance impact on my vSAN cluster?

This question, when stated in this way, is too vague to answer accurately.  We must split the definition of "impact" into two specific parts. 1.)  Additional overhead on the hosts, and 2.) Performance impact on the VMs.

Additional Overhead on the Hosts

The "overhead" relates to the additional physical resources used as a result of using Encryption.  A change in resource utilization from adding encryption services may come primarily in the form of CPU and memory.  How much?  This will vary for a few very important reasons:

Increased overhead typically results in a decrease in the number of potential VMs per host.  An increase in overhead may have an impact on performance in cases where there is minimal headroom remaining to absorb that additional demand.

Performance Impact on the VMs

Additional encryption and decryption steps will occur for all types of vSAN storage traffic, such as resynchronizations, but the primary method of determining the performance impact that matters is through latency as seen by the guest VM shown in the vSAN performance metrics.

The amount of impact by vSAN data-at-rest encryption, vSAN data-in-transit encryption, or both will be workload-dependent.   Encryption activity only occurs when the VM is committing reads or writes to disk: Local or remote.  Real workloads have unique levels of I/O behavior.  Some VMs, such as in-memory databases may have high CPU activity, but proportionally low I/O activity relative to that amount of CPU usage.  Other applications may have a modest amount of CPU activity, but proportionally high I/O activity relative to that amount of CPU usage.  The only way to determine the impact of additional overhead on the hosts, and the performance impact on the VMs is to test it using your real workloads, on your existing hardware.  It is for these reasons that suggesting a one-size-fits-all percentage of impact across all environments would not be accurate or useful.

Can one use a synthetic I/O generator or benchmarking tool to determine impact?  It will work, but it will not be representative of what you will see with real workloads.  Why?  Synthetic benchmarking will typically allocate 100% of its efforts toward generating and transmitting as much I/O as possible.  With real workloads, only a fraction of the CPU cycles consumed by the VM is related to I/O activity.  This ratio of CPU cycles to I/O activity will depend on the workload and change by the second.  Therefore, when evaluating the impact of encryption services in a vSAN environment, it is advised to stick with production workloads.

Figure 2.  Comparing I/O and CPU activity for a synthetic I/O generator versus a normal workload.

We generally recommend enabling/disabling during the time a new cluster is deployed.  This recommendation stems from the encryption services performing a rolling reformat of the storage devices used in the cluster.  It is an automated process, but it does take time and resources.  Enabling it or disabling it on a production cluster with live workloads is perfectly acceptable if you wish to use the feature, or evaluate encryption using the vSAN Proof of Concept Guide.

These recommendations may help in your efforts in implementing vSAN encryption services in your environment.

You can find more tips and answers to commonly asked questions on vSAN encryption services on the vSAN FAQs under "Security."

VMware makes it easy to run a vSAN cluster that provides end-to-end encryption.  Understanding what to look for, and how to measure this behavior before and after encryption is enabled will give you the answers to how much of an impact enabling vSAN encryption services will have in your environment.