VMware Tools version 11.2 is a feature packed release. Apart from general enhancements and updates like:

We have released VMware Tools and Carbon Black Sensor integration, a new timeprovider plugin for guests and VMware Tools GuestStore.

This blog focuses on the VMware Tools GuestStore, a feature request we received from our customers to have a safe and straightforward mechanism to share content with multiple VMs.

Over the years, VMware has developed and acquired several management solutions (Carbon Black, AppDefense, etc.). While some solutions do not require an agent, many need an agent to be running inside the VM.

Post-deployment distributing updates to these agents have been a long-standing challenge. Today customers employ multiple distribution solutions to solve this problem. For example, Windows Server Update Services (WSUS) and Microsoft System Centre based solutions are used for a windows-based environment. On the other hand, for Open source/Linux based environments, vendor-provided RPM/Debian package repositories are used.

While these solutions serve the purpose, they also come with some inherited shortcomings:

So, what is VMware Tools GuestStore, and how does it help?

With the VMware Tools GuestStore, it is now possible to release agent-specific updates, patches, and configuration files without a new VMware Tools release.

This was not possible earlier as an agent could not be released and updated without updating VMware Tools. Some agents also require access to some global configuration and customization for better integration in the customer environment. With VMware Tools Guest Store distributing all these agent components have become smooth and straight forward.

With VMware Tools GuestStore, we have introduced some new components. Let us quickly look at them:

GuestStore Client: GuestStore clients are the applications, agents, or scripts running inside the VM that access content from GuestStore. 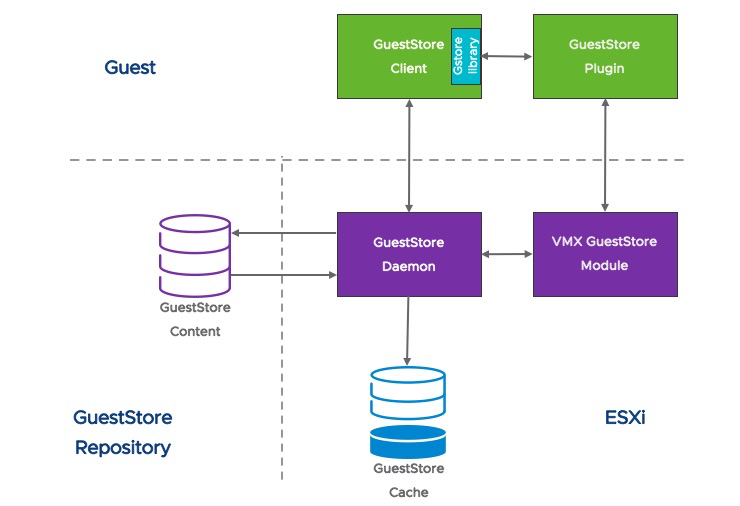 GuestStore access is enabled by default when GuestStore has been configured on the host. However, there are two VM settings that VI admins can use to control VM's access to the resources available in the GuestStore repository:

When no rules are specified entire GuestStore content is accessible to the VM. When a VM requests content from GuestStore, grant rules are applied first followed by deny rules in the order specified. The rule that matches first gets applied and no further rules are considered. If there is no match for a resource, access is granted by default.

All the activities related to VMware Tools GuestStore are logged under vmware.log of the guest and gstored.log of the host(/var/logs/gstored.log). This video demonstrates how the GuestStore Repository can be configured on a shared datastore.