The Basics of Remote Direct Memory Access (RDMA) in vSphere

Remote Direct Memory Access (RDMA) is an extension of the Direct Memory Access (DMA) technology, which is the ability to access host memory directly without CPU intervention. RDMA allows for accessing memory data from one host to another. A key characteristic of RDMA is that it greatly improves throughput and performance while lowering latency because less CPU cycles are needed to process the network packets.

In a traditional network data path, an application needs to go through the buffers using the sockets API in the user space. In the kernel, the data path includes the TCP, IPv4/6 stack all the way down to the device driver and eventually the network fabric. All these steps require CPU cycles for processing. With high bandwidth networks today (25,40,50, and 100GbE) this can pose a challenge because of the amount of CPU time required to process data and put that data on the wire. That is where RDMA comes into play. 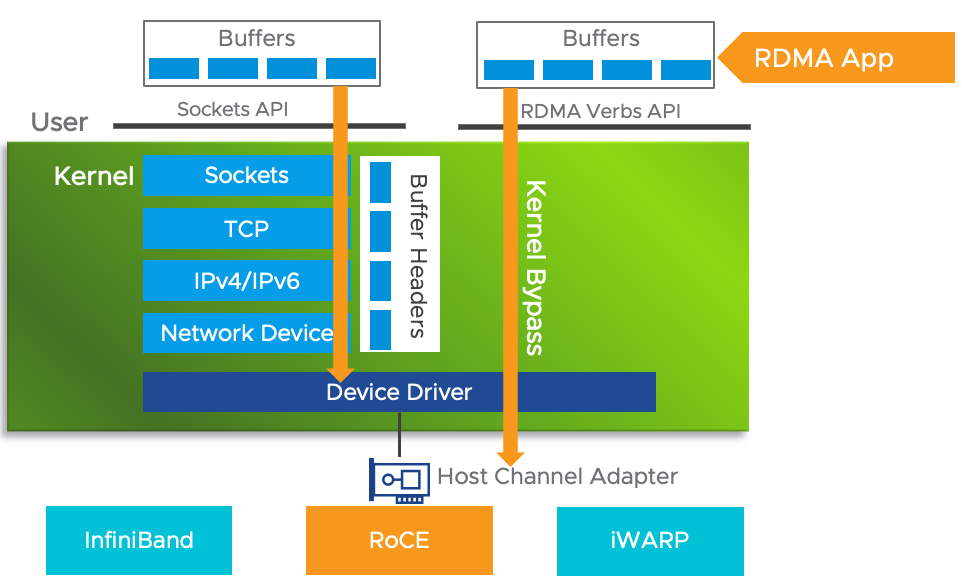 When the so-called communication path between the source and destination is set up, the kernel is by-passed. By doing so, the network latency is lowered while data throughput is increased because there's a lot less CPU cycles involved. The RDMA application speaks to the Host Channel Adapter (HCA) direclty using the RDMA Verbs API. You can see a HCA as a RDMA capable Network Interface Card (NIC). To transport RDMA over a network fabric, InfiniBand, RDMA over Converged Ethernet (RoCE), and iWARP are supported.

RDMA is supported with vSphere. The same logic applies, that when two ESXi hosts communicate with eachother over a fabric, using HCAs, RDMA is possible. Good examples of RDMA usage with vSphere are various storage featues like iSCSI extentions over RDMA introduced in vSphere 6.7, or NVMeoF using RDMA in vSphere 7. vSphere Bitfusion is another solution greatly benefits from using RDMA. With the release of vSphere 7 Update 1, native endpoints (non-PVRDMA endpoints) like with storage arrays are supported with RDMA, too.

Using RDMA for virtual workloads in a vSphere environment is supported. High-Performance Computing (HPC) applications, database backends, big data platforms are just some examples of the wide variety of applications that can profit from higher I/O rates against lower latency with RDMA.

There's multiple options to expose RDMA to virtual machines (VM). The first option is to use (Dynamic) DirectPath I/O to passthrough a HCA, or a RDMA capable NIC, to the VM. Using passthrough creates a 1-to-1 relationship between the VM and the RDMA network device. The downside here is that this vSphere features like vMotion are not supported with passthrough.

RDMA over Converged Ethernet (RoCE) is supported with PVRDMA. The beauty of RoCE is that a ethernet fabric can be used. There's not explicit requirement for a seperate fabric like with Infiniband. The ethernet fabric needs to support RDMA, primarily by supporting Priority Flow Control (PFC). PVRDMA supports both RoCE v1 and v2. The difference here is that RoCE v1 supports switched networks only, where RoCE v2 supports routed networks.

To configure PVRDMA for a VM, the ethernet fabric should support RDMA, and a HCA is required per host. The following esxcli command can be used to check for RDMA capable NICs.

The equivelant is also found in the vSphere Client. Go to an ESXi host > Configure > Physical Adapters. All the host's network interfaces are shown with RDMA section, showing if RDMA is supported.

If RDMA is enabled, the RDMA adapter is paired to a physical uplink and bound to a VMkernel interface.

On the VM side, VM hardware version 13 is required. When configuring a Linux x64 guest OS, you'll be presented with the option to choose PVRDMA as the adapter type. Also notice the device protocol option for both RoCE v1 and v2.

When another VM an another ESXi host is set up for PVRDMA, the applications in the PVRDMA-enabled VMs can utilize RDMA for greatly increased I/O against lower latency! More details on how to configure PVRDMA for virtual machines is found here.