vCenter Profiles is way to ensure configuration and version consistency across multiple vCenter Server instances. Update Planner helps in making sure the latest updates are checked for product interoperability and installed for the vCenter Server Appliance (VCSA). vLCM is a comprehensive collection of abilities in vSphere 7 for consistency across ESXi hosts and easier ways to update hosts. This article focuses on vSphere Lifecycle Manager (LCM).

Consistency across ESXi hosts is essential for creating reliable and high performing platforms, but is difficult to obtain, especially at scale. vLCM solves the complexity by enforcing consistency across ESXi hosts in a cluster using a declarative model. vLCM not only accomplishes this by using an ESXi base image but extends it with the desired state for firmware and driver versions as well.

The goal is to remove variability between ESXi hosts. This will enable customers to have more efficient upgrades, improved reliability and performance, and easier overall maintenance. The most important capabilities of vLCM are its desired state model, the integration with hardware vendors for full-stack firmware updates, and simplified OEM image customizations, along with automatic compatibility checks.

To enable a cluster with a declarative image, the following prerequisites must be met;

Note: NSX-T was not supported in the first vSphere 7. However, NSX-T support has been added with vSphere 7 Update 1 and NSX-T 3.1.

When a vSphere 7 cluster is configured to use a single cluster image, vLCM will replace the baseline methodology used in vSphere Update Manager (VUM).

A cluster image consists of the following components:

When upgrading to, or installing, vSphere 7, customers are still using vSphere Update Manager (VUM). vLCM can to be enabled per cluster. Enabling vLCM by configuring a cluster image is easy, following the wizard under Cluster > Updates > Setup Image. The compatibility check includes verification of currently installed vibs (kernel modules). For example, you might see warnings about vibs when you are using a vendor specific ISO. These modules can be added as vendor addon in the image. Please note that QuickBoot is supported for vLCM, but has to be enabled manually.

The Cluster is Up-to-date

When the cluster is managed collectively using the same image and all hosts are remediated, vLCM shows everything is up to date.

The Image Depot in vCenter Server is used as a repository for all vLCM components. When the vCenter Server is connected to the internet, it will automatically download ESXi base images and vendor components. If a proxy is required, vLCM uses the proxy settings from vCenter Server Appliance. If there’s no direct internet access, the Update Manager Download Service (UMDS) can be used, or updates to the image depot can be imported manually.

A Hardware Support Manager (HSM) may be used to integrate with vSphere to check, but also update firmwares and drivers on the system, directly from within the vSphere Client!

The HSM is software provided by the hardware vendor as i.e. an OVF image. It includes a plug-in that registers itself as a vCenter Server extension. Hardware vendors provide and manage the firmware & driver updates that are accessed by vLCM using the HSM.

As of the vSphere 7 update 1 release, Dell OpenManage, HP IlO Amplifier and Lenovo XClarirty are supported. Check out this demo to see how vLCM with HSM is used to remediate ESXi hosts and updates firmwares and drivers: 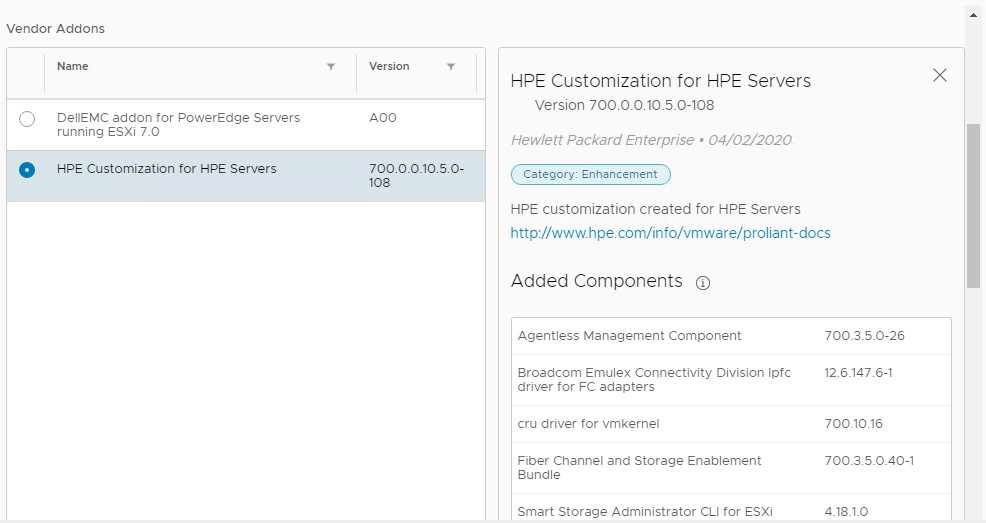 When configuring a new cluster, customers have the ability to implement a declarative ESXi host image for the cluster immediately. The image setup in the cluster quickstart workflow allows for choosing an ESXi base image and the optional vendor addons. 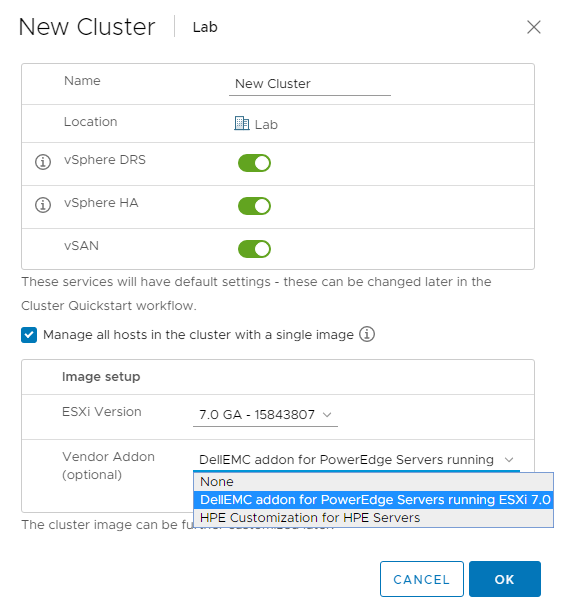 Creating the cluster using quickstart with single image cluster management allows customers to benefit from vLCM capabilities from the start.