Clustered SQL Server solution with shared disks provides the high availability capability in case of physical or operating system failures. The most used active-passive model can be extended to cross data centers with advanced storage capability such as Dell EMC’s VPLEX and IBM’s SVC.

vSAN Stretched clusters extend the vSAN cluster from a single data site to two sites for a higher level of availability and inter-site load balancing. Stretched clusters can be used to manage planned maintenance and avoid disaster scenarios, because maintenance or loss of one site does not affect the overall operation of the cluster. In a stretched cluster configuration, both data sites are active sites. If either site fails, data is still available on the alternate site. When configured with vSphere HA, VM's are automatically restarted on the remaining active site.

With the release of vSAN 6.7 Update 3, vSAN Stretched Clusters provide a solution for clustered applications like Microsoft SQL Server (further referenced as SQL Server) to use shared disk across sites. This allows data center administrators to run workloads using legacy clustering technologies on vSAN across two data centers which can fully leverage compute resource on the data centers while having the capability to sustain one site failure.

This solution designed two SQL Server Failover Clusters on vSAN stretched cluster. We emulated a 300GB tier-1 application database with cross site RAID-1 for the data and log disks and the quorum disk.

We used four DELL PowerEdge R630 servers, a 1U platform for density, performance and scalability, and with optimized application performance, to form the vSAN all-flash stretched cluster. A vSAN Witness Appliance was used as the vSAN Witness, was located on another management cluster. A virtual application located on the management cluster was used for Layer 3 routing, bridging the two sites for vSAN traffic.

The configuration consisted of six Windows 2016 virtual machines on a vSAN stretched cluster as shown in Figure 1. Two SQL Server failover clusters were configured with identical disk layouts and vSAN Storage Policy assignments. Their operating system, database, log, and quorum disks all reside on the vSAN stretched cluster. We put one active node on one site and another active node on another site for both WSFCs. Two domain controllers were created for the WSFC with each site having one to provide the authentication and DNS service with the capability to serve when one site was down. 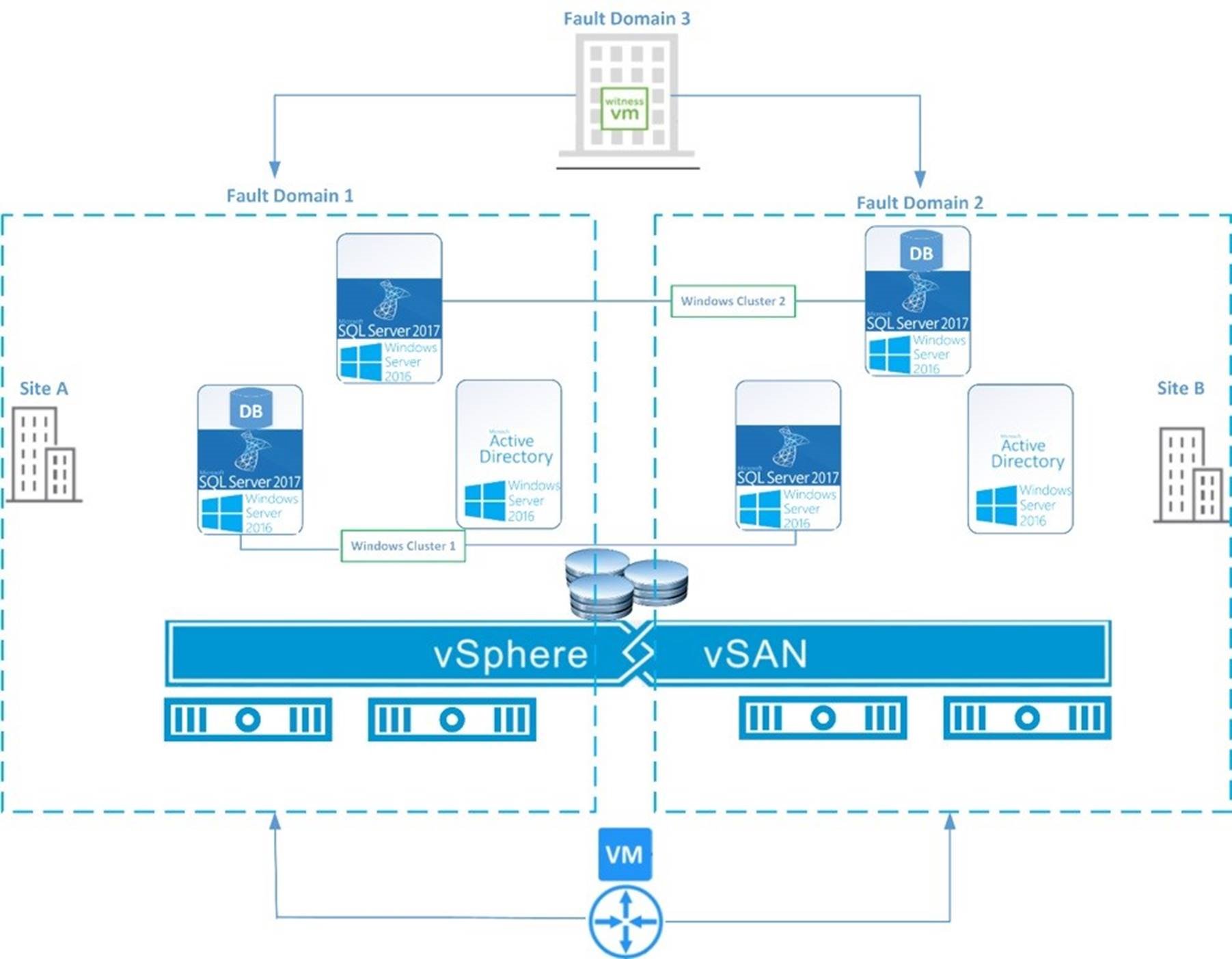 The ESXi Server in the vSAN Cluster has the following configuration as shown in Table 1.

A VMware vSphere Distributed Switch™ acts as a single virtual switch across all associated hosts in the data cluster. This setup allows virtual machines to maintain a consistent network configuration as they migrate across multiple hosts. The vSphere Distributed Switch uses two 10GbE adapters for the teaming and failover purposes. A port group defines properties regarding security, traffic shaping, and NIC teaming. We used default port group setting except the uplink failover order as shown in Table 3. It also shows the distributed switch port groups created for different functions and the respective active and standby uplink to balance traffic across the available uplinks.

An Ubuntu Linux virtual machine was configured as a Layer 3 router. Static routes were added to all vSAN hosts to ensure proper communication over the Layer 3 network.

The Scale Factor determines the database size. We configured three sized DB servers for the performance tests. We set SF=32 for medium-sized database which created 300GB database, or a TPC-E like OLTP user database with customer number 32,000, which generated around 327GB data in the data files.

As for WSFC cluster 1, the Active node was placed on site A, and the standby node was place on site B, and WSFC cluster 2 nodes were placed with the reversed order.   We set the “Site disaster tolerance” rule of the VM Storage Policy to “Dual site mirroring (stretched cluster)” for VM home, OS, DB/Log and TempDB VMDK, and the quorum VMDK.  See the figure below for the cross-site RAID-1 setting in the VM Storage policy.

Advanced vSAN data services, including deduplication & compression, encryption, and the iSCSI Target Service were not enabled. The vSAN Performance Service was enabled.

We designed two SQL Server failover clusters with each supporting one 300GB database. We configured four SQL Server virtual machines for the performance tests. Databases were created by the Benchmark Factory for Databases. The database and index files consumed approximately 300GB space. The four virtual machines were assigned 24 vCPUs, 64GB RAM, and their memory was reserved..  We set maximum and minimum memory of SQL Server instance to 51GB.  Each SQL Server virtual machine in the cluster had VMware Tools installed, and each virtual hard disk for data and log was connected to separate VMware Paravirtual SCSI (PVSCSI) adapter to ensure the optimal throughput and lower CPU utilization. The virtual network adapters used the VMXNET 3 adapter, which was designed for the optimal performance. For the TPC-E-like OLTP workload, the database size is based on the actual disk space requirement and additional space for the database growth. Table 4 is the disk layout of the two 300GB databases.

We measured the performance of two databases on the four virtual machines that formed two SQL Server FCI with one cluster hosted one TPC-E-like OLTP database. The purpose of this performance test aimed to evaluate the impact of the inter-site latency to the OLTP workloads. And to seek for the optimal inter-site latency for tier-1 application running on SQL Server FCI on vSAN stretched cluster.

The number of users were adjusted as needed to generate enough OLTP activity necessary to saturate the host. Repeatability was ensured by restoring a backup of the database before each run.   We kicked off the test concurrently from the test clients on the management cluster remotely, to avoid the side effect of the clients.  The test duration was one hour with a 15-minutes warm-up duration. Table 5 shows the test results. From the table we found that the two databases performance results were quite similar on both TPS and Average Transaction Time in milliseconds. As inter-site latency increased the Average Transaction Time increased, while the TPS value dropped.

Table 5. TPS and Average Transaction Time in Milliseconds of the 2 x 300GB Databases 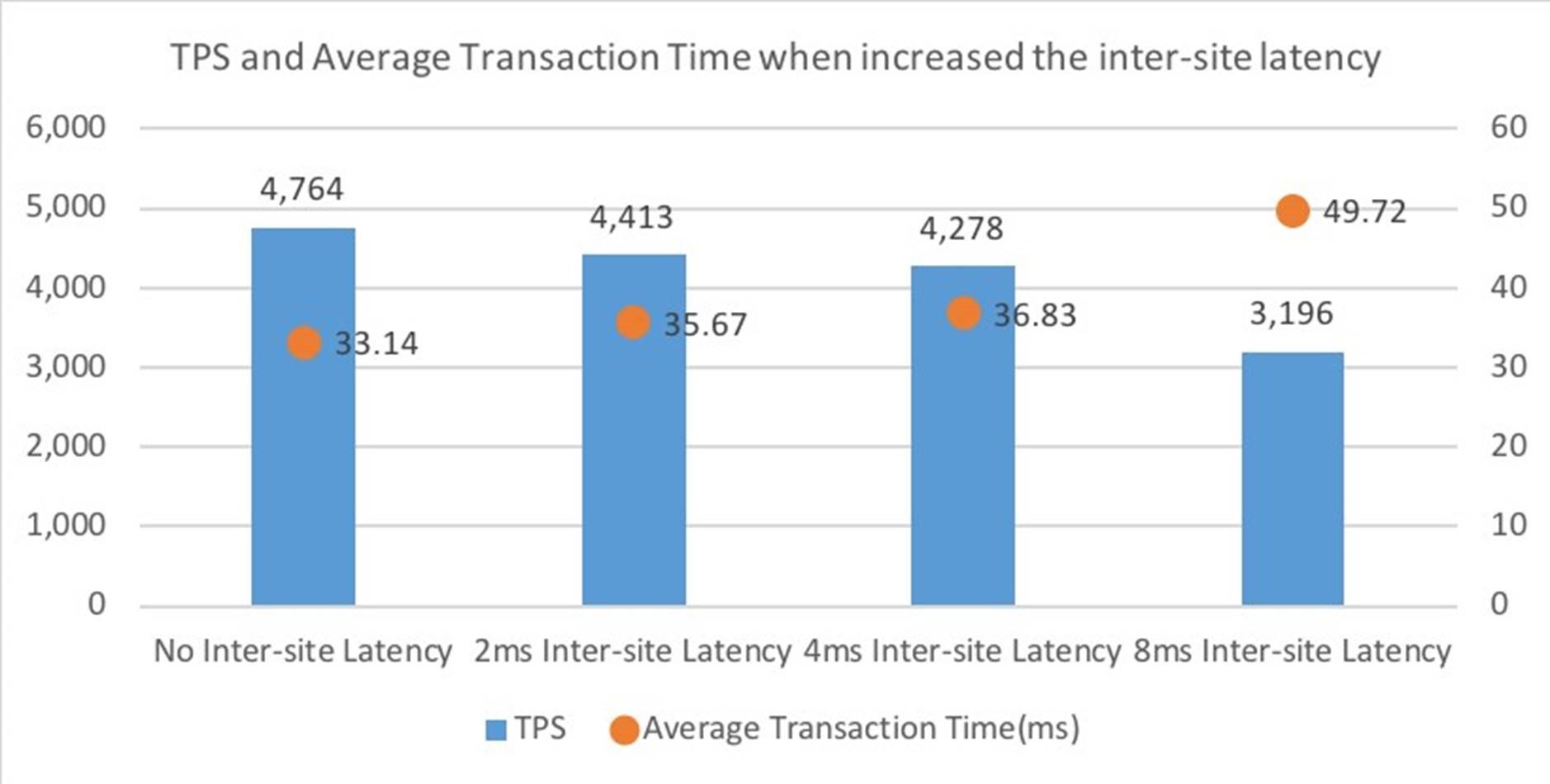 We measured the vSAN VM performance and vSAN backend performance. Table 6 is the vSAN VM Performance of the two 300GB databases. While the average VM latency increased from 0.83-0.96ms to 2.45-2.82ms on Read, and the write latency increased from 1.9-2.5ms to 20.66-25.45ms on Write when increasing the inter-site latency up to 8ms, the average vSAN backend latency was kept ad 0.2ms on read and 0.16ms on write. That indicated that the latency was on the on-flight channel like network instead of on the backend. Also from SQL Server DBA point of view, more than 4ms inter-site would introduce 9-10ms average write latency, that means running SQL Server OLTP workload on a stretched cluster with more than 4ms inter-site latency for tier-1 application is not recommended and will have the performance impact.

Application Roles are clustered services like SQL Server FCI on WSFC. When a FCI is built on vSAN stretched cluster using shared disks for databases, role failover can happen from one site to another, when the active node is on one site and passive node(s) on another. The duration of a SQL Server instance failover from the active node to the standby node(s) in a WSFC only requires a few seconds. When configured with a Dual Site Mirroring Storage Policy, a vSAN stretched cluster can guarantee data access even when one site has failed or is isolated.

In this reference architecture, we verified the following scenarios and demonstrated the capability of Failover Cluster and advantages of vSAN stretched cluster.

The test results were shown in Table 7. 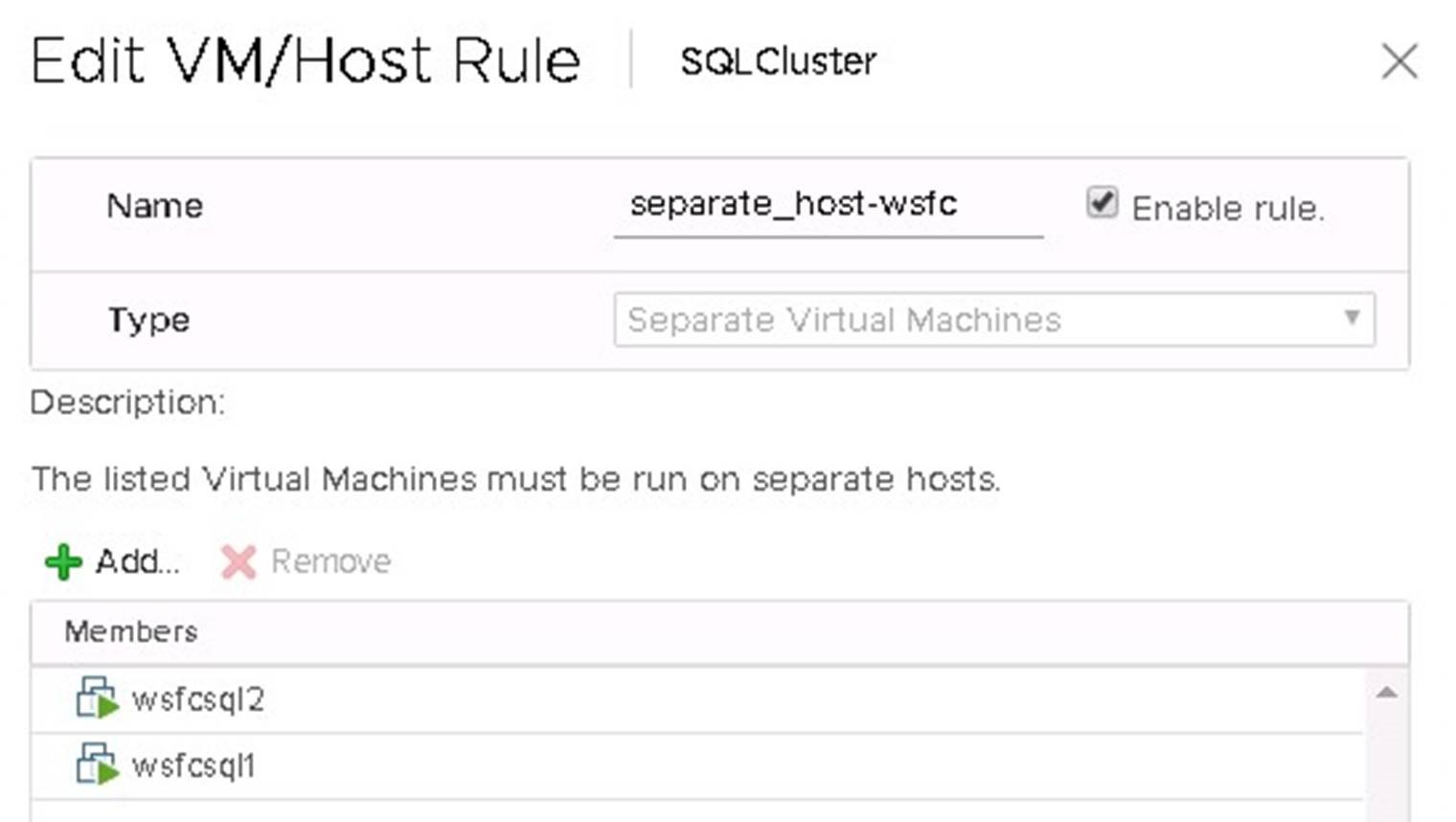 Figure 5. Create VM/Hosts Rule to Separate the VMs of a WSFC 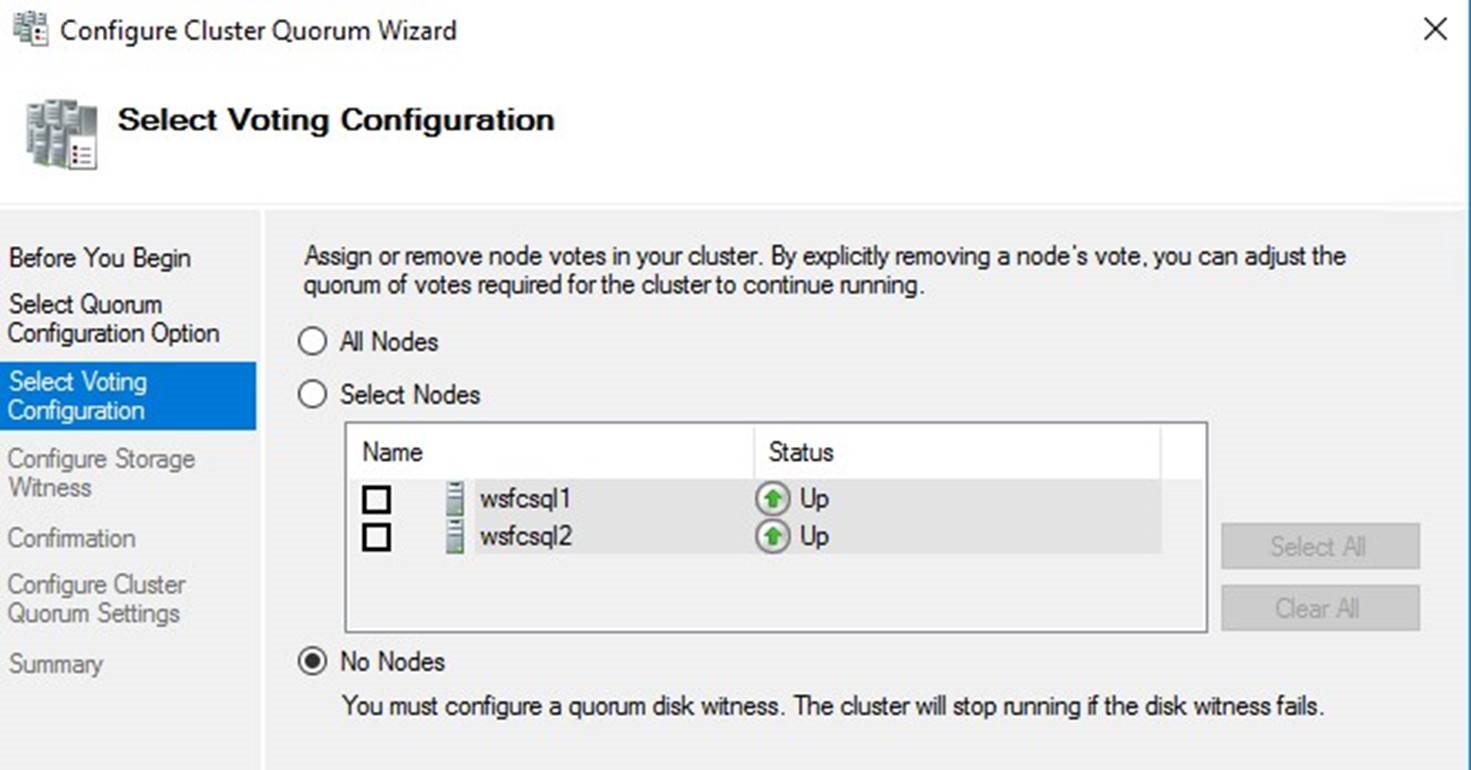 vSAN 6.7 Update 3 and later releases support SCSI-3 Persistent Reservations (SCSI3-PRs) on a virtual disk level required by WSFC to arbitrate an access to a shared disk between nodes, for both standard and stretched cluster. The generic support for WSFC without limitation provides maximum flexibility for you to deploy Windows Failover Clustering on vSAN stretched cluster.

The following reviewers also contribute to the paper contents: