The modern-day CIOs are concerned with high performance, high availability, and low cost when planning their Database Management Systems (DBMS). Over the years, Clustering Databases have become the mainstream choice over standalone databases in production environments. Clustering improves the availability of SQL Server instances by providing a failover mechanism to a new node in a cluster in the case of physical or operating system failures. The most used model is the active-passive nodes creating an embedded base of clustering legacy systems that could benefit from today’s new technologies, such as Hyperconverged Infrastructure (HCI) infrastructures.

Failover Clusters (WSFC). It supports SCSI-3 Persistent Reservations (SCSI3PR) on a virtual disk level required by WSFC to arbitrate an access to a shared disk between nodes. Support of SCSI-3 PRs enables configuration of WSFC with a disk resource shared between VMs natively on vSAN datastores.

Currently the following configurations are supported:

Note that Windows 2008 R2 (Data Center Edition) and SQL Server 2008 R2 RTM were successfully validated, including the deployment on vSAN and the migration steps from SAN to vSAN. It is recommended rechecking with Microsoft for general support lifecycle for a given version of a SQL Server and Windows OS.

To form the vSAN all-flash cluster we used four DELL PowerEdge R640 servers. 1U platform was employed for density, performance and scalability, all optimized for high application performance. Each VMware ESXi™ host contains two disk groups, and each disk group consists of one cache-tier NVMe SSD and four capacity-tier SAS SSDs. We configured pass-through mode for the capacity-tier storage controller.

The configuration consisted of seven Windows 2016 virtual machines on a vSAN Cluster as shown in Figure 1. We have three SQL Server clusters created using shared disks from vSAN native. Two clusters were for the performance test and one cluster is for migration validation purpose. For tight integration between WSFC and Active Directory, a domain controller was created in the vSphere and vSAN cluster. 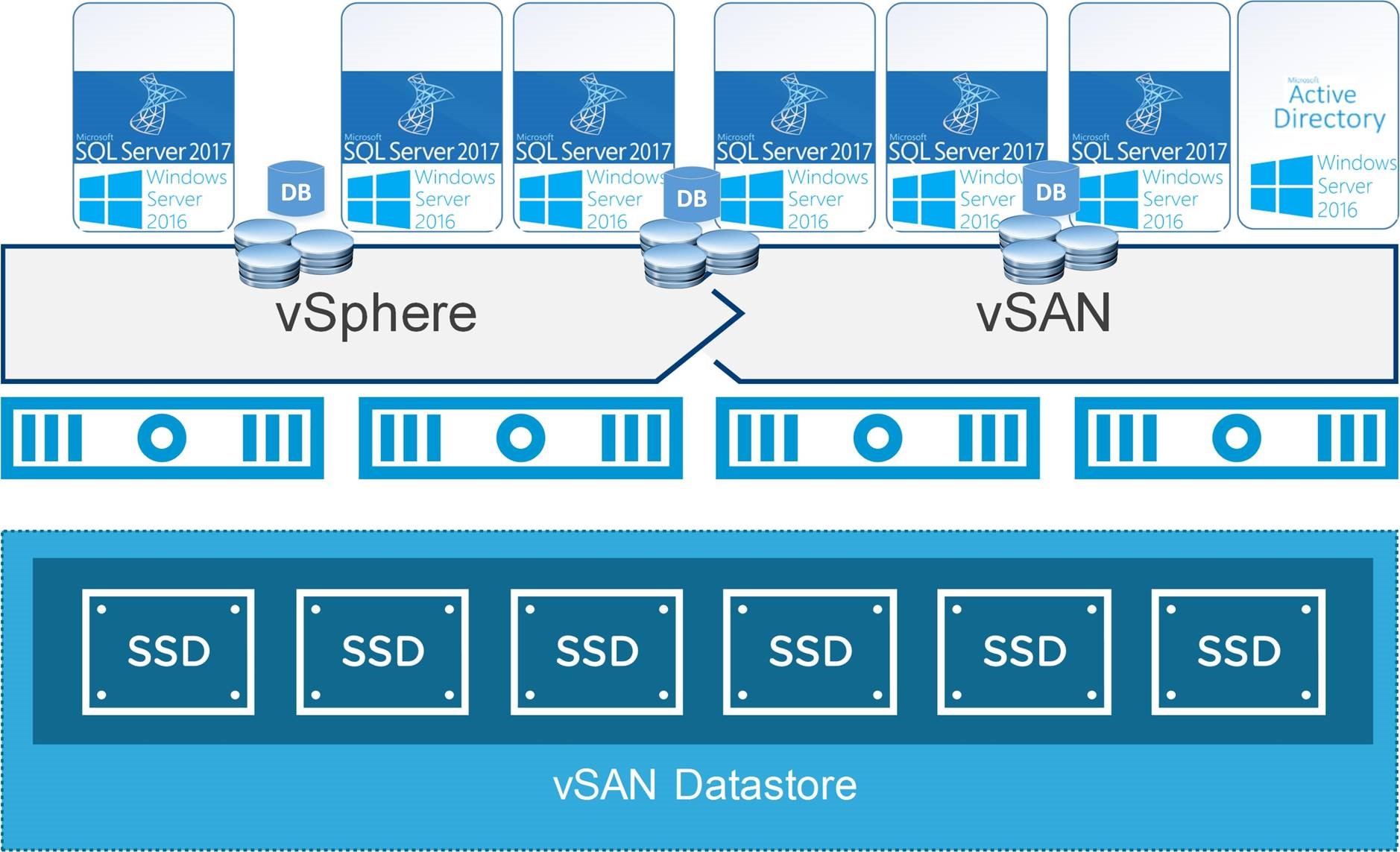 We accomplished the following tests in this paper:

We used the Benchmark Factory for Databases to run tests with the desired parameters. We focused on the All-Flash vSAN aggregate performance of the 4-node cluster. Each test duration was set to one hour with 15-minute preconditioning and 45-minute sample period. We also used the vSAN Performance Service to monitor the vSAN performance.

We used the RAID-1 with 100 percentage space reservation for both data and log virtual disks, for the 300GB database.

We used Erasure Coding (RAID-5) on the data file disks, but keep the RAID-1 for the log virtual disk, with 100 percentage space reservation for both data and log virtual disks, for the 600GB database.

Various sized databases on vSAN and different platforms were tested. Following are the virtual machine configuration and disk layouts.

This test measured the impact of stressing a SQL Server 2017 on a Windows Server 2016 guest VM using Benchmark Factory for Databases to generate the TPC-E-like OLTP workloads.

The outline of the configuration of the virtual machines to support SQL Server FCI is as follows.

24 vCPUs and 64GB RAM with memory reservation on the 300GB and 600GB database VMs, for both active and passive node of the two WSFC. Both SQL Server instances were set with the maximum and minimum memory of 51GB. We used the Paravirtual SCSI controllers for the data and logs disks, and set the SCSI Bus Sharing to Physical. Figure 2 illustrates settings for one of the nodes with 600GB database. 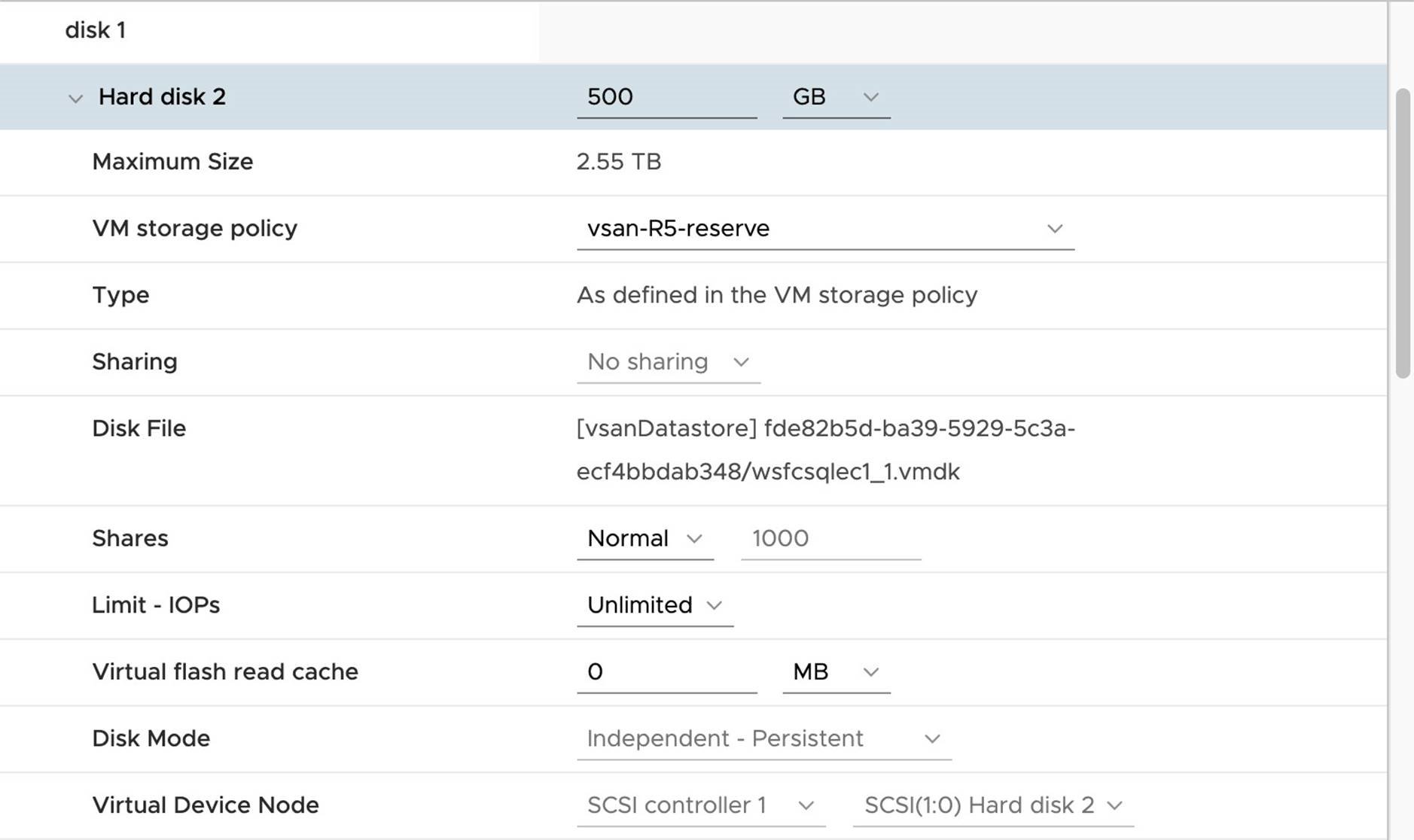 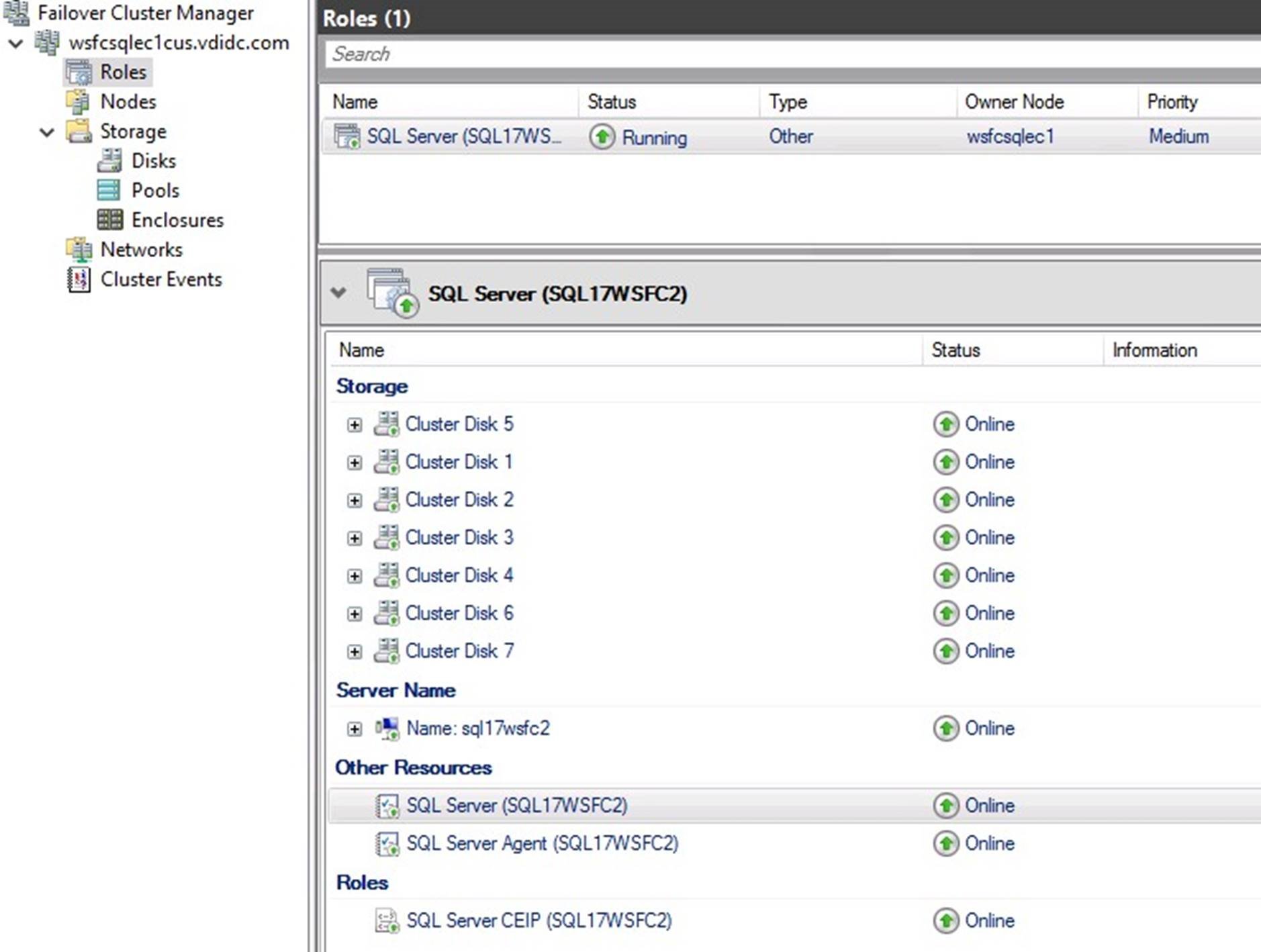 The OLTP performance is highly compute and storage capability dependent. We demonstrated that with different SPBM settings on different sized databases, vSAN provided the capability to keep TPS beyond 2,200, which kept the average transaction time at around 0.03 seconds.

Table 3 is the vSAN VM Performance of the 300GB and 600GB databases with different SPBM policies.

Table 3. vSAN VM Performance of the Concurrent Workload of the 300GB and 600GB Databases

Application Roles are clustered services such as Failover Cluster Instance (FCI) or generic file server. An FCI is a SQL Server instance that is installed across nodes in a WSFC. This type of SQL Server Instance depends on resources for storage and virtual network name. The storage can use Fibre Channel, iSCSI, FCoE, SAS, or use locally attached storage for shared disk storage. Those storages should provide SCSI-3 locking and the requirement applies to other service running on WSFC too. And this is now supported on native vSAN.

We verified the SQL Server role failover and demonstrated the capability of Failover Cluster and advantages of vSAN native.

We verified the role failover for both SQL Server FCI and File Server; developed an application using BMF REST API to detect the job status, and to check that the job was running. If the job was stopped, we restarted the job immediately.

Migration from SAN to vSAN for SQL Server Cluster on WSFC

In this scenario, we accomplished migration for a SQL Server cluster with two nodes, from traditional SAN, emulated by using DellEMC UnityVSA using pRDM through iSCSI interface (it also support FC or FCoE configured pRDMs), to a vSAN. This procedure is applicable to the migration using real SAN storage in the same configuration.

We deployed UnityVSA for pRDM emulation purpose. Four LUNs were created with the capacity and usage described in Table 5. We created two nodes Windows Failover Cluster, and put the two VMs to a shared Datastore from UnityVSA, and created 3 LUNs being as the pRDM to be added to the two VMs for Cluster witness disk, SQL Server system databases and user database. We created a 50GB OLTP database using Benchmark Factory for Databases and stored it into the 100GB LUN.

Figure 6 shows the created LUNs from UnityVSA for the preparation of the migration demonstration.

We created iSCSI interface on the UnityVSA and connected to the interface from the four ESXi hosts. As shown in Figure 7, the disks can be accessed by each ESXi host through the iSCSI software initiator.

The disk exposed as RDM in physical compatibility mode or pRDM to SQL Server, virtual machine will have fixed capacity and using the physical mode of the SCSI Controller. 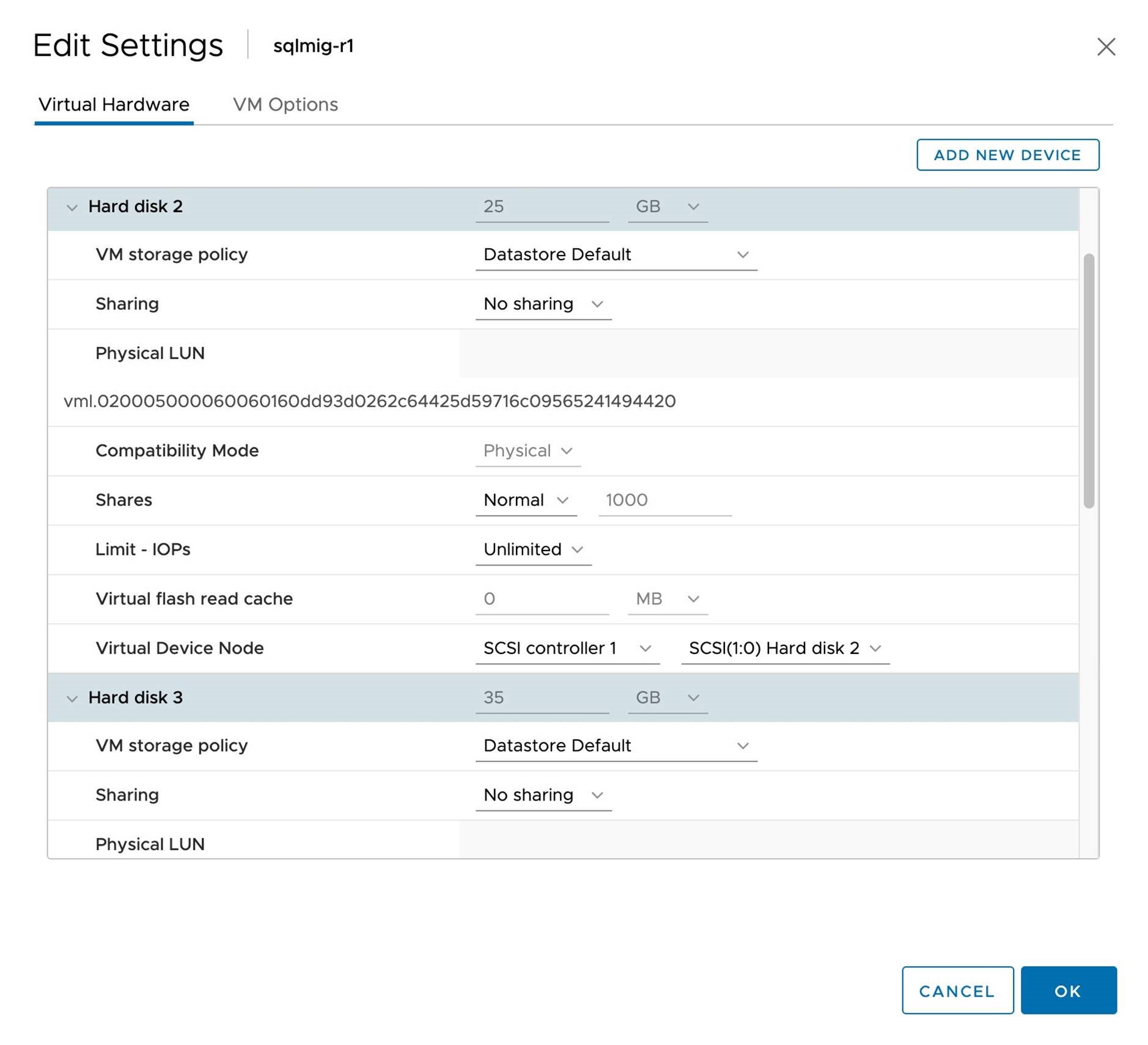 Note that before migration, backup is highly recommended to avoid potential data loss. This migration operation is offline, and the duration is mainly for data copy. Make sure the offline time window is enough before moving forward.

To migrate the SQL Server FCI cluster, using pRDMs as clustered disk resources to vSAN, follow the steps below:

Figure 8 shows the disk was provisioned by vSAN instead of from UnityVSA and you can change the policy and size according to the requirement. 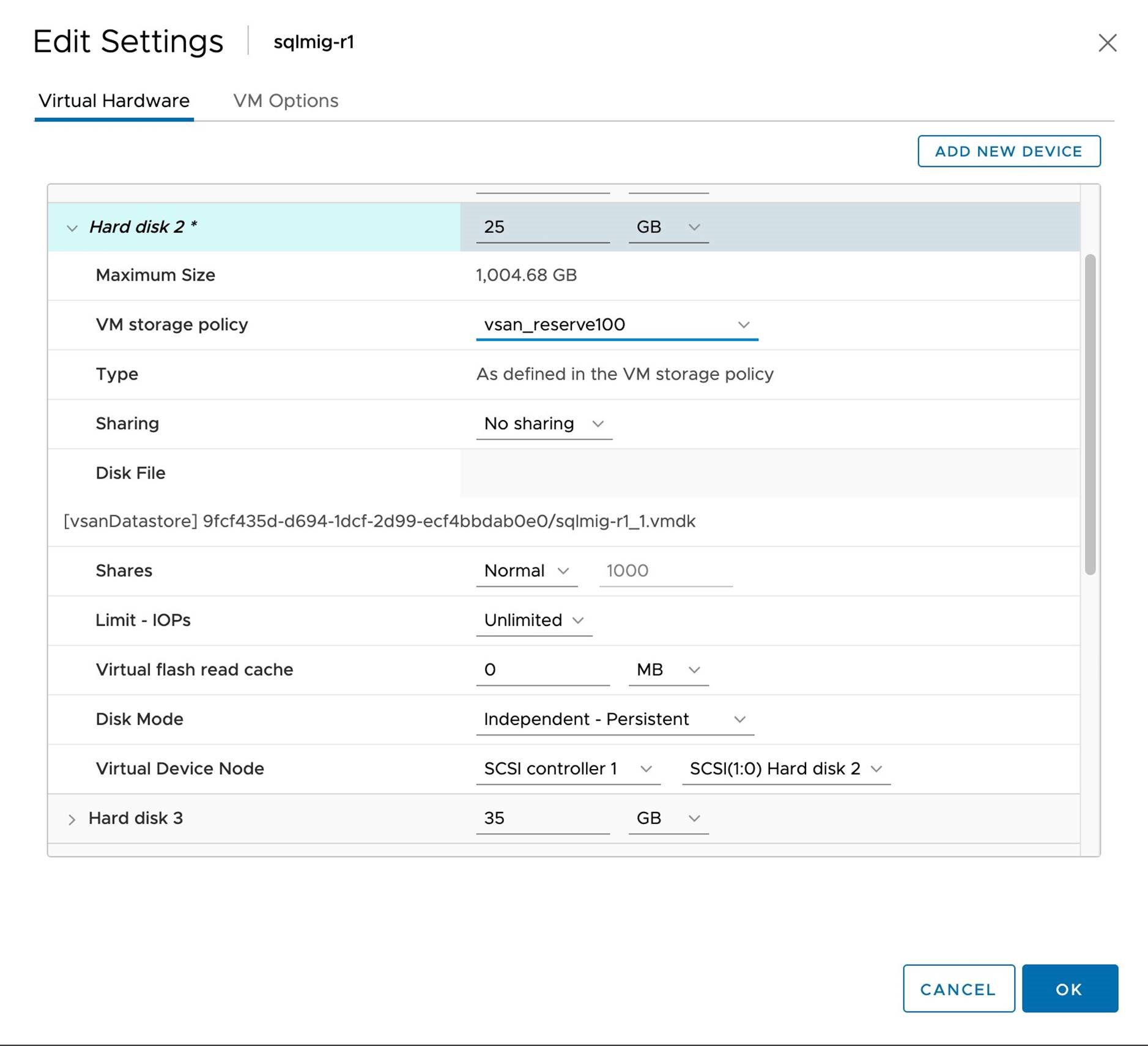 Figure 9. Disks on vSAN after vMotion

After following the steps above, the shared virtual disks of SQL Server cluster were on vSAN. Users can manage the virtual disks by using vSAN policy including expending the disk, changing policy to follow the best practice to run SQL Server on vSAN to meet different business requirements.

Failback or Rollback from vSAN to SAN

The recommended migration and rollback way is to migrate a first node, power on the VM, and start up the SQL Server Cluster role. If it is failed due to the disk issue, all other nodes still have the pRDMs attached and can be started immediately. You may add back the pRDM disks to the first node following removing the virtual disks from vSAN.

If you want to roll back the configuration from vSAN to SAN, given the previous steps did not delete data from the RDM disks, you may follow the steps below to migrate disks back to SAN using pRDMs.

vSAN 6.7 U3 and later releases support running WSFC natively by sharing VMDKs through SCSI-3 Persistent Reservations (SCSI3-PR). This is configured in VM configuration only without complicated LUN settings, and there is not needs for pRDMs from legacy storage. The generic support for WSFC without limitation provide the maximum flexibility for you to deploy Windows Failover Clustering on vSAN native.