VMware vSANTM, as a shared storage system for vSphere, provides a uniform management plane for container storage. The deep integration between VMware Enterprise PKS and vSAN means that developers can consume storage as code with freedom by abstracting the complexity of the underlying storage infrastructure. Storage Policy Based Management (SPBM) in vSAN offers users flexibility to define policies on demand in VMware vCenter® and delivers ease of management of storage for containers.

VMware vSAN Stretched Clusters with a Witness Host refers to a deployment where a user sets up a vSAN cluster with 2 active/active sites with an identical number of ESXi hosts distributed evenly between the two sites. The sites are connected via a high bandwidth/low latency link.

This solution is a showcase of using VMware vSAN Stretched Cluster as a platform for deploying VMware Enterprise PKS in a vSphere environment. All storage management moves into a single software stack, thus taking advantage of the security, operational simplicity, and cost-effectiveness of vSAN in production environments. Workloads can be easily migrated from bare-metal configurations to a modern, dynamic, and consolidated Hyperconverged Infrastructure (HCI) solution based on vSAN. vSAN is natively integrated with vSphere, and helps to reduce the design and operational burden of a data center.

This paper is intended for cloud-native application administrators and storage architects involved in planning, designing, or administering of VMware Enterprise PKS on vSAN Stretched Cluster.

This section provides an overview of the technologies used in this solution. The versions depicted in the table are the minimum required version of each product for running this solution.

VMware vSphere 6.7 is the infrastructure for next-generation applications. It provides a powerful, flexible, and secure foundation for business agility that accelerates the digital transformation to cloud computing and promotes success in the digital economy.

vSphere 6.7 supports both existing and next-generation applications through its:

VMware vSAN is the industry-leading software powering VMware’s software defined storage and HCI solution. vSAN helps customers evolve their data center without risk, control IT costs and scale to tomorrow’s business needs. vSAN, native to the market-leading hypervisor, delivers flash-optimized, secure storage for all your critical vSphere workloads, and is built on industry-standard x86 servers and components that help lower total cost of ownership (TCO) in comparison to traditional storage. It delivers the agility to easily scale IT and offers the industry’s leading native HCI encryption.

NSX-T Data Center is focused on emerging application frameworks and architectures that have heterogeneous endpoints and technology stacks. In addition to vSphere hypervisors, these environments include other hypervisors such as KVM, containers, and bare metal.

VMware Enterprise PKS is a purpose-built container solution to operationalize Kubernetes for multi-cloud enterprises and service providers. It significantly simplifies the deployment and management of Kubernetes clusters with day 1 and day 2 operations support. With hardened production-grade capabilities, VMware Enterprise PKS takes care of your container deployments from the application layer all the way to the infrastructure layer.

As depicted in Figure 1, there were 3 separate stretched vSphere/vSAN clusters in the architecture: one management cluster, one edge cluster and one compute cluster.

There were 3 sites in the architecture: site 1 and site 2 were for data placement, and site3 was for vSAN witness appliance.

Each one of the three clusters consisted of at least six ESXi hosts. They were evenly distributed into 2 data sites. So for each cluster, there were at least 3 ESXi hosts in each data site.

For the Compute Cluster, we created 3 availability zones for VMware Enterprise PKS in Ops Manager: 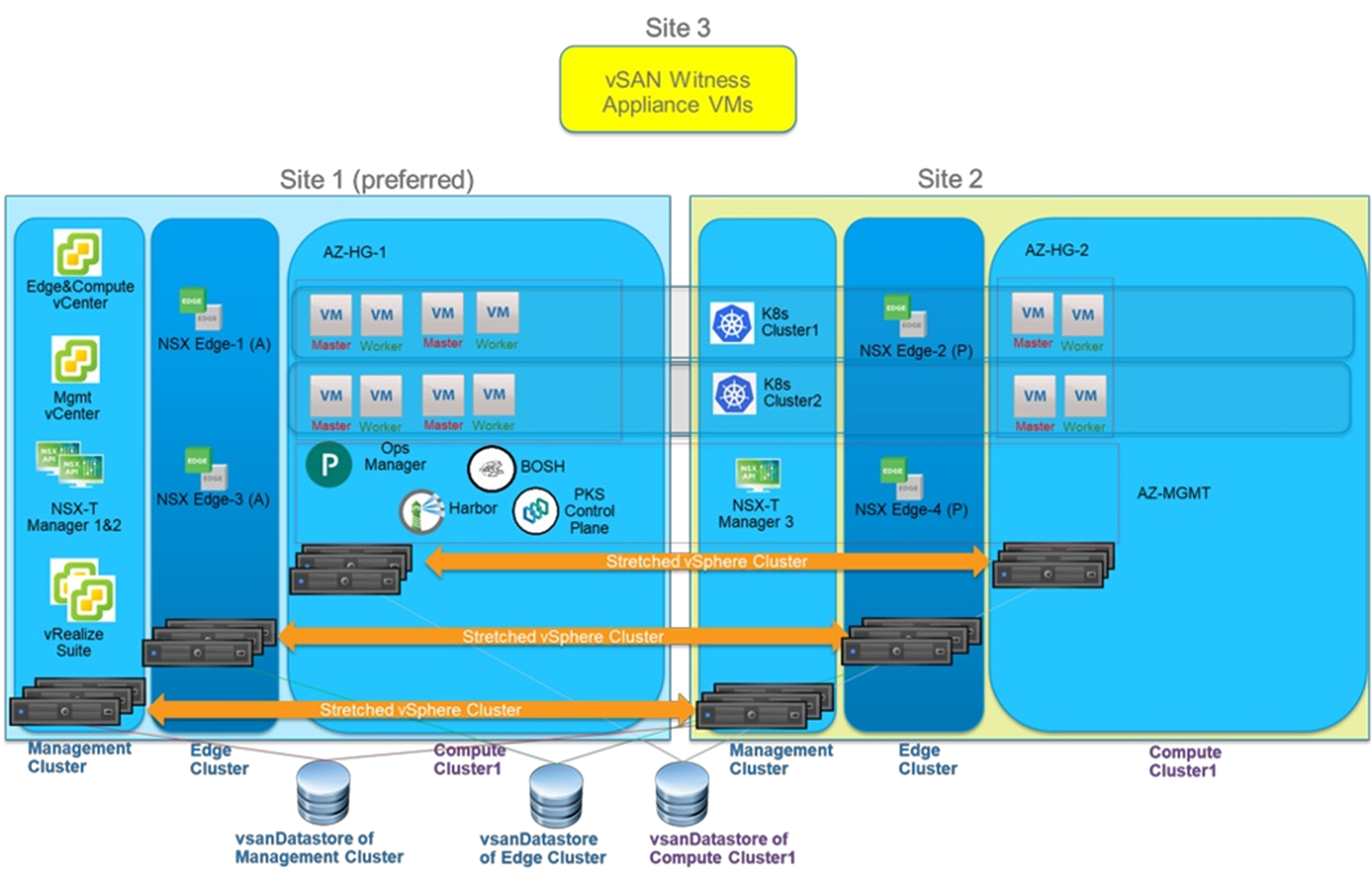 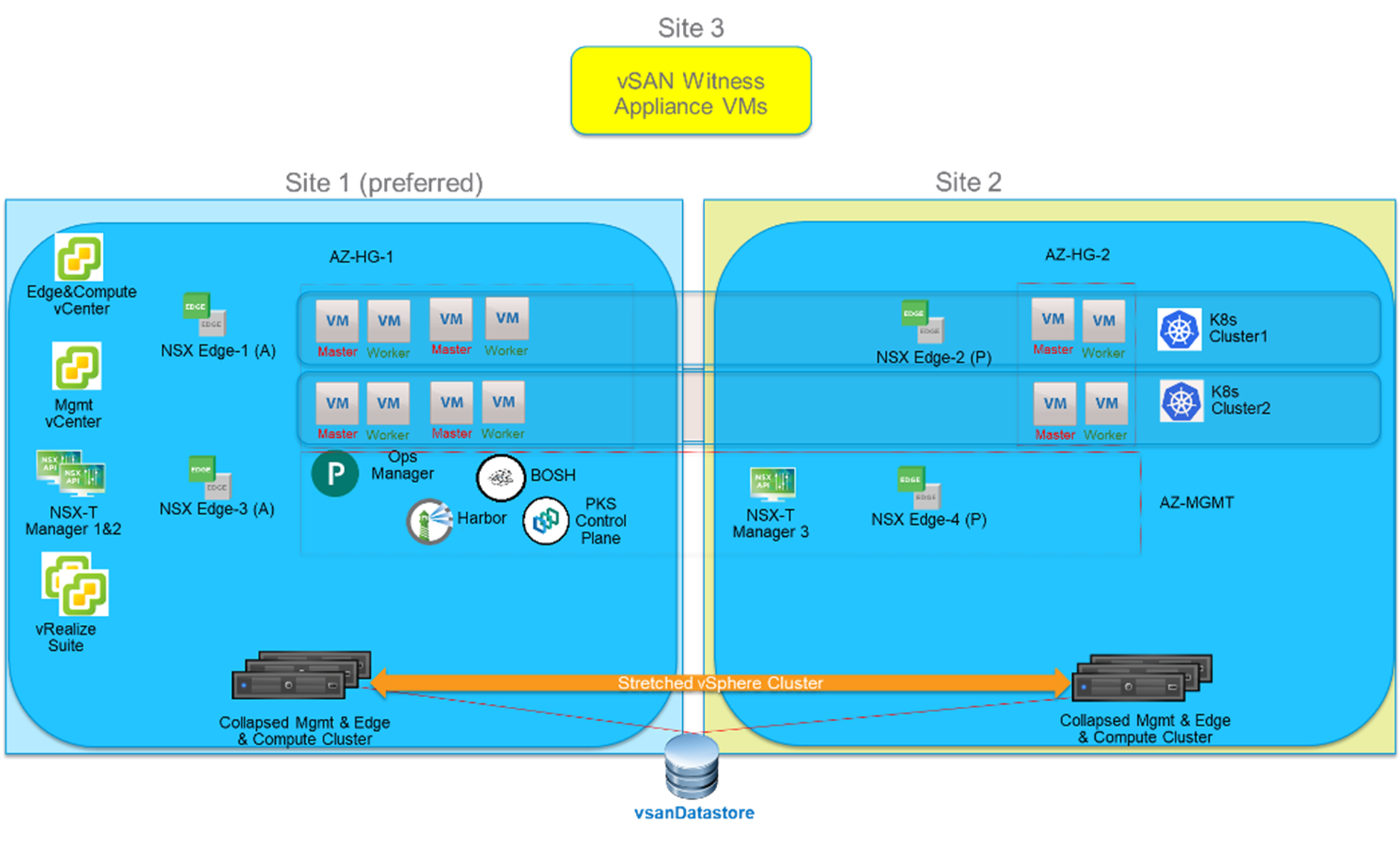 There are two options:

2.Each ESXi host with 2 NICs

If the number of physical NICs is a constraint and only two NICs are available in the server, both the NICs are used for NSX-T n-vds. The fully collapsed vSphere cluster NSX-T deployment document can be used to collapse all VMKernel adapters and virtual machine networking traffic to the NSX-T network.

NSX-T requires MTU to be at least 1,600 for the physical switches and NICs. vSAN supports MTU 1,500 and MTU 9,000 and the performance tests show that larger MTU settings can help vSAN improve throughput.

Based on the above requirements, we set the MTU to 9,000 in the whole environment to reduce the physical network management complexity and pursue a higher performance.

Bosh resurrector MUST be deactivate to enable Bosh Director work in a vSAN Stretched Cluster environment,

The reason for this configuration is that when a site is down, we will leverage vSphere HA to restart all virtual machines in the other site. If Bosh resurrector is enabled, during a site down event, Bosh may try to resurrect the virtual machines. For resurrecting, Bosh will try to delete the virtual machines first, before recreating it. This will conflict with vSphere HA functioning and produce a race condition, which might lead to unpredictable outcomes. 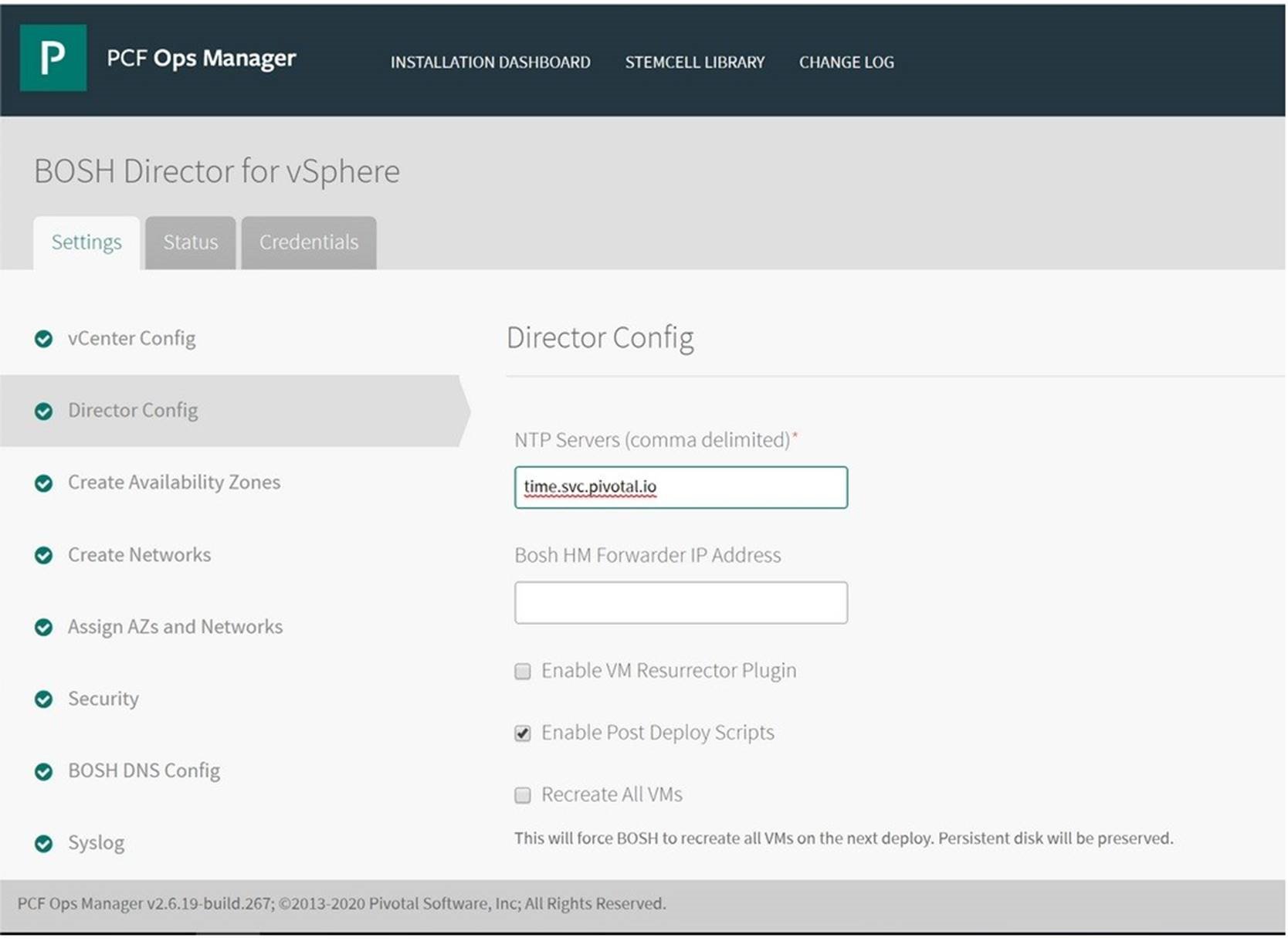 When configuring the availability zones with Host Groups in Ops Manager, set the ‘VM-Host Affinity Rule’ field to ‘SHOULD’. We will create the corresponding vSphere DRS rule in the next section. 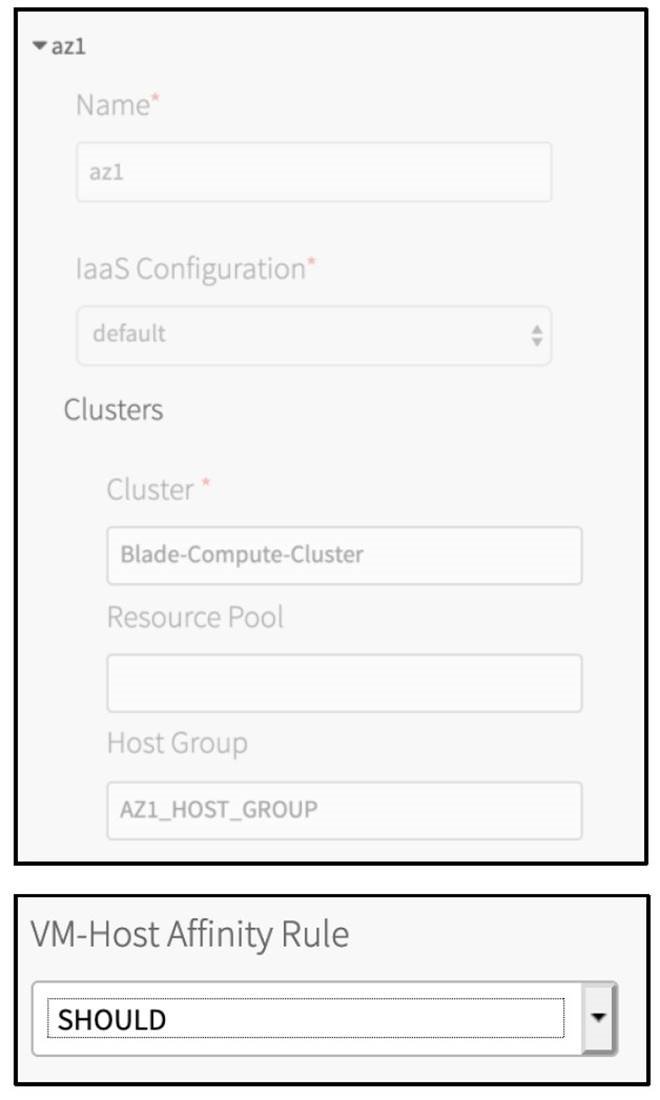 vSphere HA must be enabled in order for the virtual machines to be restarted in case of a site failure.

vSphere DRS must be enabled. Besides, we should create a ‘DRS VM/Host Rule’ with the ‘Should run on hosts in group’ option like depicted in Figure 3. The following virtual machines ‘should’ be placed in Site 1 in a healthy situation: 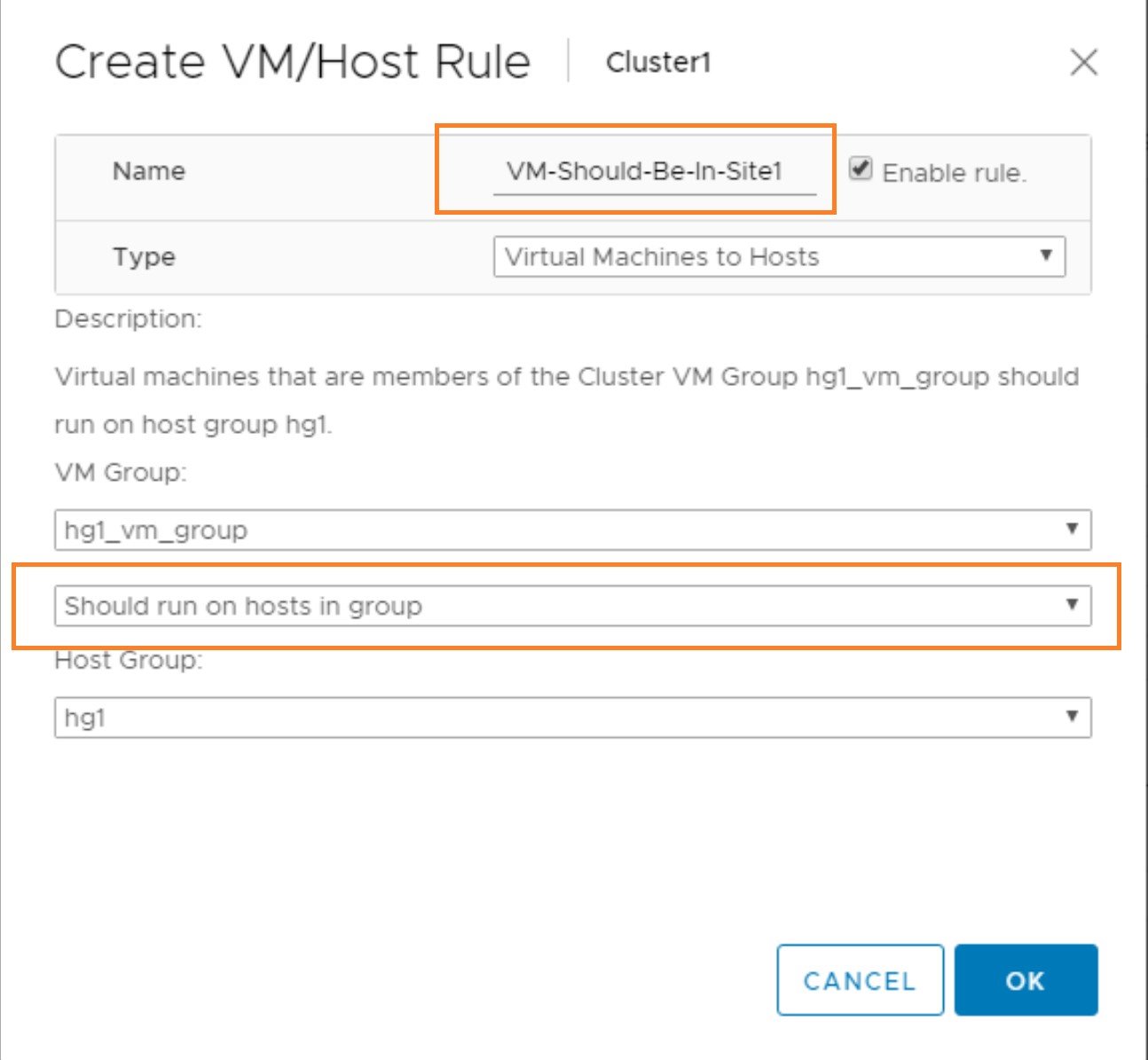 Figure 5. Creating a ‘DRS VM/Host Rule’ That Indicates Some Virtual Machines Should Reside in Site 1

We did the failover and failback testing by totally powering off one whole site: site 1, site 2, or site 3. The expected behaviors are:

When a site is down:

When a site is brought back up:

We powered off site 1 and monitored the results as below.

Within 5-10 minutes, all expected behaviors were observed. Figure 6 shows the result after the virtual machines were restarted by HA. 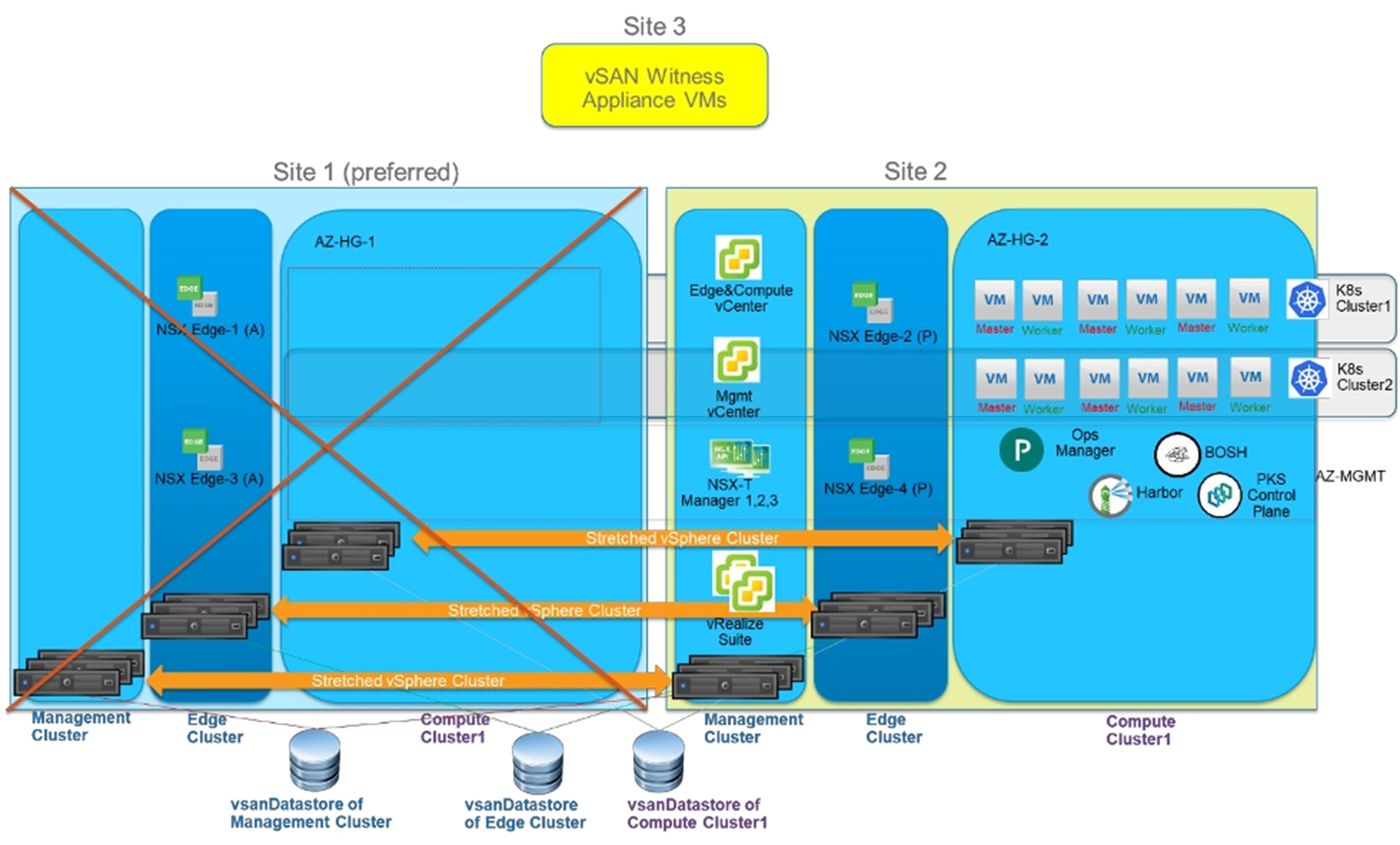 Figure 6. Site 1 is Down and the Impacted Virtual Machines are Restarted by HA in Site 2

After the site 1 failover testing was completed, we powered on site 1 and monitored the results as below.

Within 5-10 minutes, all expected behaviors were observed. Figure 7 shows the result after the virtual machines were vMotioned back to site 1. 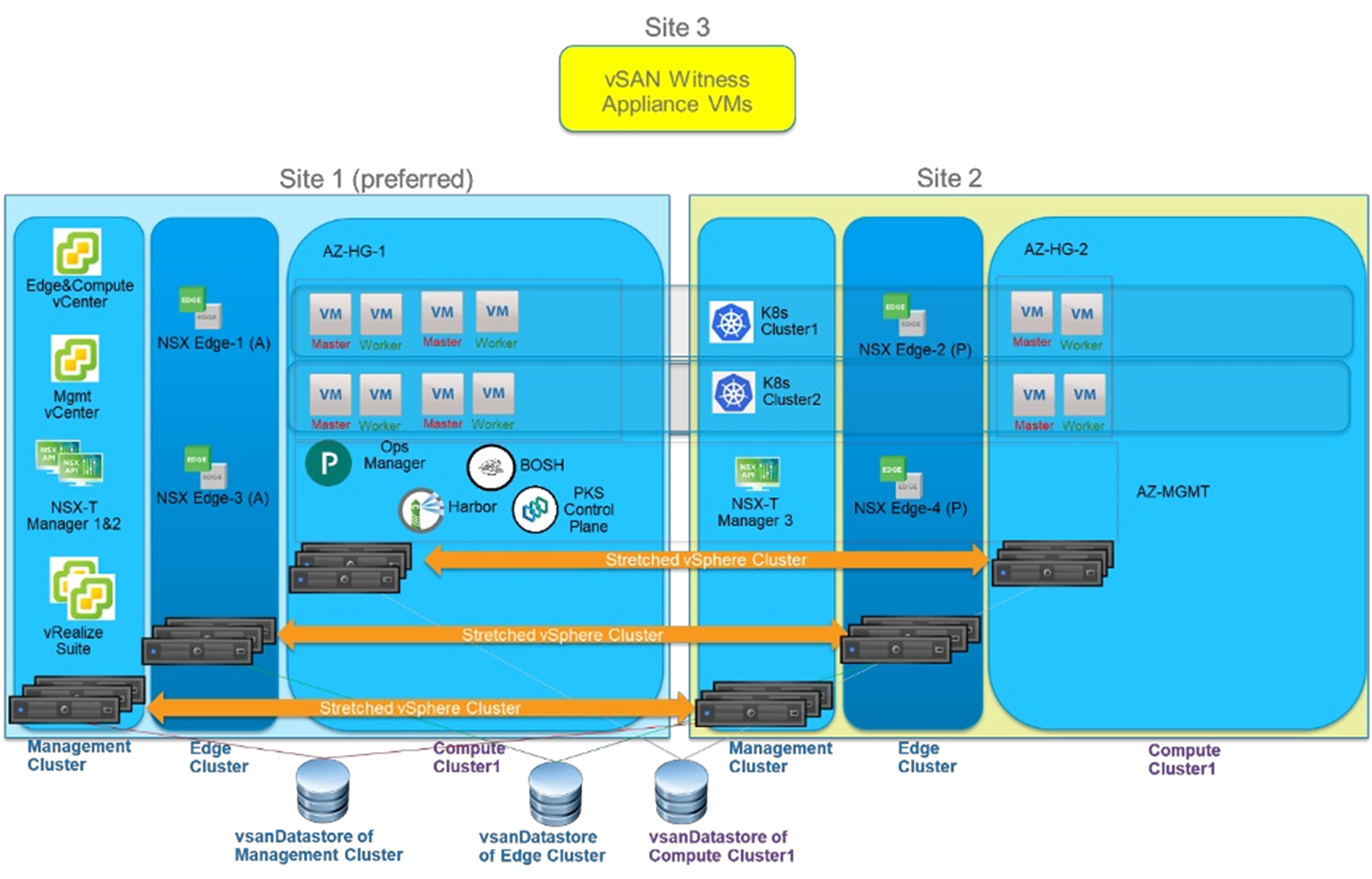 Figure 7. Site 1 is Powered on and the Impacted Virtual Machines are vMotioned Back to Site 1

Based on the DRS rule, the following virtual machines ‘should’ be in site 1 so they were vMotioned back to site 1:

We powered off site 2 and monitored the results as below.

Within 5-10 minutes, all expected behaviors were observed. Figure 8 shows the result after the virtual machines were restarted by HA. 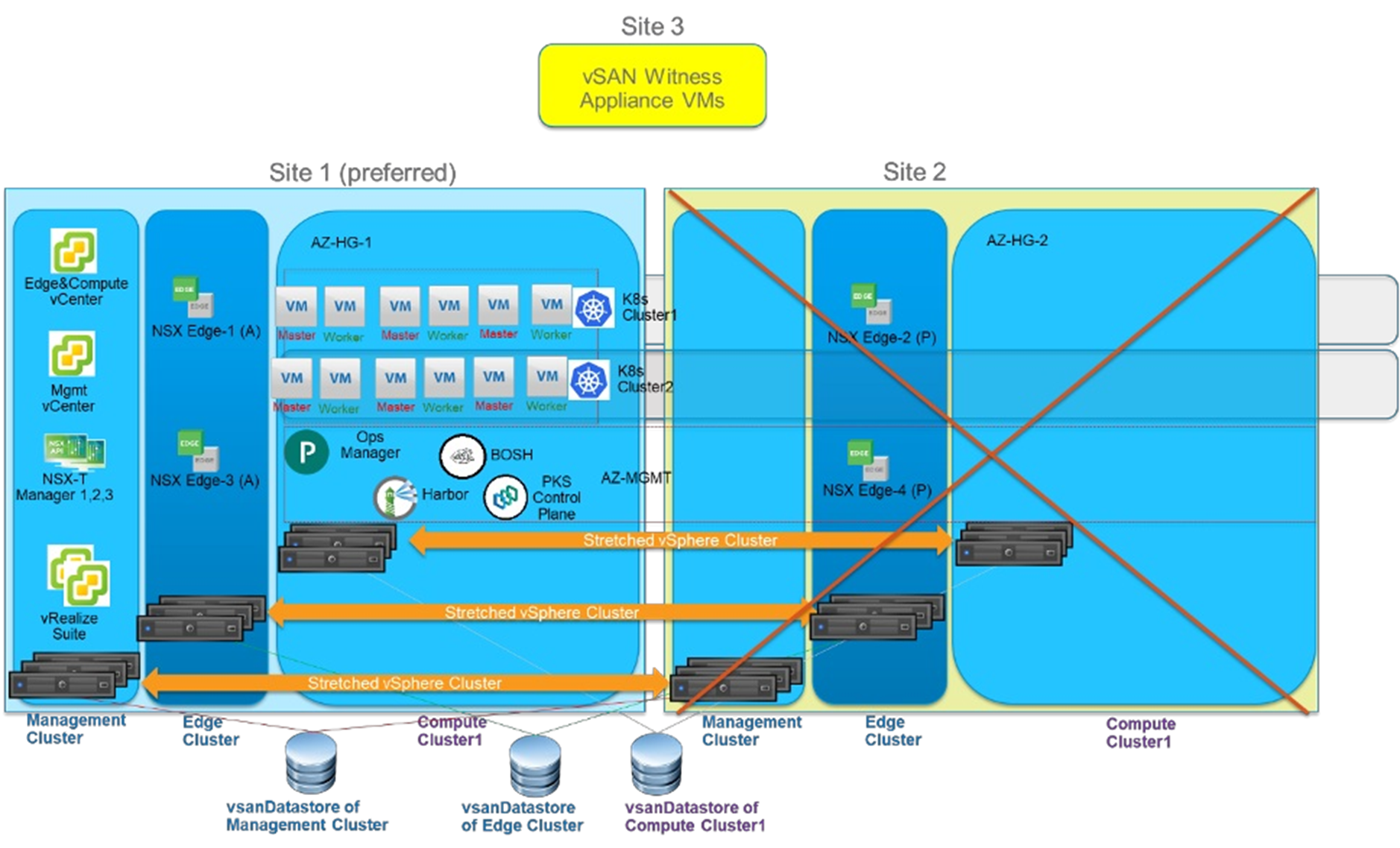 Figure 8. Site 2 is Down and the Impacted Virtual Machines are Restarted by HA in Site 1

NSX-T Manager 3 was restarted in site 1.

All Kubernetes nodes (virtual machines) originally in site 2 were restarted in site 1.

After the site 2 failover testing was completed, we powered on site 2 and monitored the results as below.

Within 5-10 minutes, all expected behaviors were observed. Figure 9 shows the result after the virtual machines were restarted by HA. 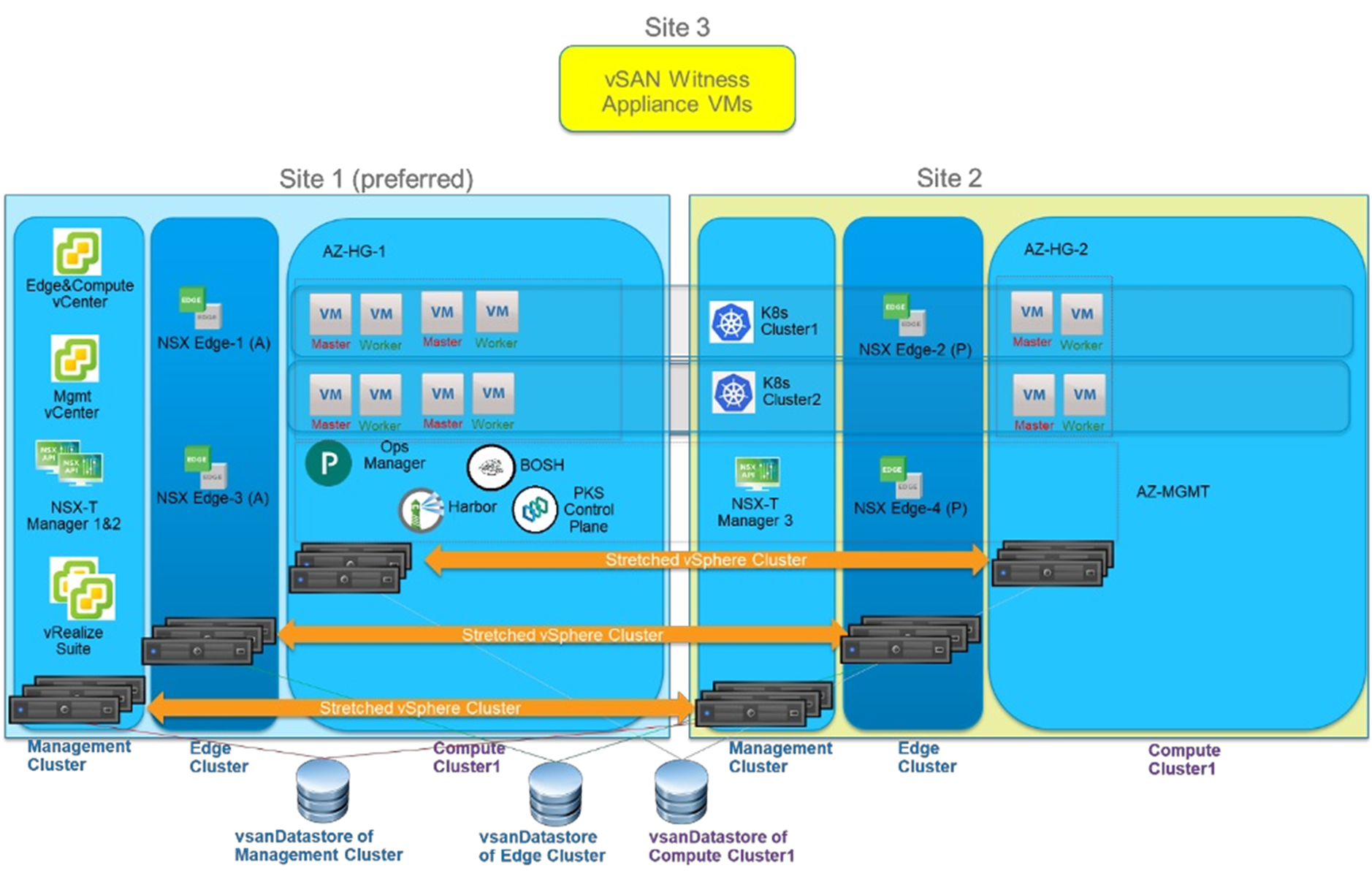 Figure 9. Site 2 is Powered on and the Impacted Virtual Machines are vMotioned Back to Site 2

NSX-T Manager 3 was vMotioned back to site 2.

All Kubernetes nodes (virtual machines) originally in site 2 were vMotioned back to site 2.

The following caveats must be taken into consideration when implementing a VMware Enterprise PKS on vSAN Stretched Cluster solution before going into production.

Overall, deploying, running, and managing VMware Enterprise PKS on VMware vSAN Stretched Cluster provides high availability to the infrastructure services as well as Kubernetes clusters by taking advantages of the security, performance, scalability, operational simplicity, and cost-effectiveness of vSAN. Furthermore, by combining VMware Enterprise PKS, vSAN and NSX-T as a solution, all storage and networking managements including infrastructure and operations of vSphere, vSAN, NSX-T move into a single software stack, thus you do not need two separate infrastructures for traditional storages and containers.