Introduction — To boldly go where no app has gone before

If you liked Bitfusion, we think you will love what we are calling Project Radium. It is a generalized approach to splitting applications and running the segments that need acceleration on remote machines. But I'm going to spill a lot of pixelated ink before I get to the point. The impatient can skip the economics analogy and go straight to the Today or even the Next section.

The law of comparative advantage was explained to me in fun, story form and seemed magic. Wealth appeared from thin air. On the other hand, the article I just read in an online encyclopedia managed to strip the comparative fun it has over other economic laws down to a dismal common.

So, let's review the story version.

Since coconuts are cheap to Robinson and dear to Friday, Robinson should specialize in coconuts and Friday in palm leaves. They should trade at a price in between their personal costs.

Specialization Applies to Computing, Too

We should easily be able to see that the specialization of microservices and hardware accelerators benefit applications with greater efficiency. For example: 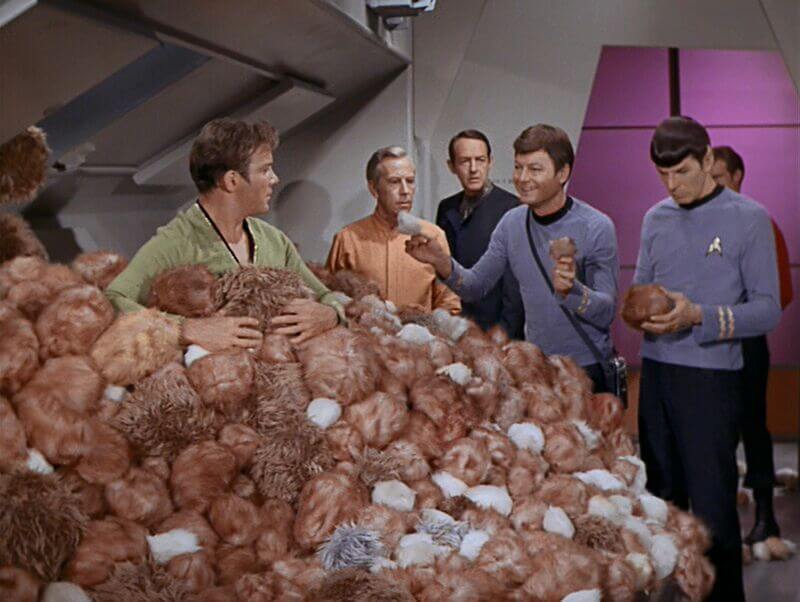 Kirk demonstrates that specialization can have a downside, too

Bitfusion Today — I canna' change the laws of physics

Bitfusion exists because we want our servers with accelerator resources to specialize in acceleration. We neither want them idle nor running code that a general-purpose machine should run. Bitfusion provides virtualization for GPUs and delivers services to orchestrated containers. Bitfusion pools servers with GPUs and provides their acceleration resources to many clients across the network. Plus, it only provides resources for the time they are needed. And Bitfusion can partition GPUs so multiple clients can consume them at the same time. Bitfusion enters into the land of specialization and trade by splitting your ML app software stack as shown here.

Figure 1: Bitfusion splits the application stack, allowing for remote GPU access from a pool of servers

You have two servers running your application. The bottom of the stack runs on a server with GPUs. The top of the stack runs on a general-purpose machine. The split occurs exactly at the CUDA driver API. To monitor these accesses, Bitfusion interposes a new layer in the stack. Calls to CUDA on the client are intercepted by Bitfusion, which sends them to the remote Bitfusion GPU server. There, the CUDA calls are made in earnest. The interposing layer has many responsibilities, but we can summarize them as keeping the data, code, and execution environment in agreement.

Here are some of the benefits (or wealth, in our economic analogy) we gain by this specialization.

Bitfusion has all this today.

After Bitfusion had been introduced to the market, we began to look at its approach to specialization and virtualization. We are conducting research and making prototypes that split applications at different places and by different methods.  We call this work Project Radium (after the city in Kansas).

The benefits we are seeking are:

Where and if possible, we are also seeking:

We also hope to ease the job for application writers. Scheduling and distributing micro-services is difficult. Radium allows you to write in a more monolithic style and to leave some of the partitioning and distribution to the tool.

Most of these benefits should come with a first release, others would materialize with subsequent releases.

Project Radium doesn't have to split  applications at a at a single, fixed place in the stack. A user-configurable script allows you to select exported library functions or scripted module functions of your application for execution on a remote virtual appliance. Project Radium monitors both halves of the application. As it observes relevant events, it keeps code, data, and execution environment coherent. This is a more generalized approach than Bitfusion uses.

More detail will be coming from OCTO (Office of the CTO)., but one abstraction is to think of Radium as moving the split higher in the software stack.  For example, instead of interposing at CUDA calls, Radium could set monitoring points at the level of TensorFlow calls or at a subset of TensorFlow calls. One machine, an initiator, runs normal application code, the top half; another machine, an appliance with accelerators, acts as an acceptor and runs the high-performance code of the bottom half. Project Radium is being engineered for remote acceleration of AI/ML applications. We may see other uses in the future. Out of the box, it will be ready for AMD, Graphcore, Intel, NVIDIA and other vendor hardware.

In another use-case, Project Radium offers support for software backends. You can create a pool of servers that run special software — software you can't run everywhere, whether because of expense, or because of a tight coupling with particular hardware. For instance, one backend might be ThirdAI, software that runs efficient mathematics for deep learning on traditional CPUs that can even sometimes surpass GPU performance.

Some Q and A

Q. Do I have to refactor my application?
A. No. Project Radium requires no changes to code or workflows. The application split and the allocation of remote resources occur dynamically when you run the application.

Q. If this is just generalized remoting of applications, why not just ssh the entire application to the accelerator machine?
A. This is not complicated…and it is what we've already said, but the question occurs to everyone anyway. So it is good to review.

Q. Where can this run?
A. Linux machines using a common ISA (x86 to start) attached by  datacenter-class switched networks

Q. What are the software compatibility requirements of client-server (initiator-acceptor) machines?
A. Testing so far indicates that running recent versions of the Linux kernel on both sides suffices.  The versions and distributions do not have be exact matches. In general, libraries, drivers, and frameworks need only be installed on one side or the other — but we'll leave the details to later discussions when we can walk through specific examples.

We've discussed the goals and workings of Project Radium. Aspects of the value proposition naturally emerged along the way.  But let's conclude with an explicit examination. Project Radium lets you decompose, manage, and deploy accelerated applications. It is a step toward disaggregated computation.

So, this blog is wrapping up, but Radium's long half-life will yield ongoing and happy prospects.

VMware's Office of the CTO will be publishing more about Project Radium in the weeks to come.  Start here!