As more developers are adopting newer technologies like containers and Kubernetes to develop, build, deploy, run and manage their applications, it's important that the VMware stack provide all the necessary infrastructure to run such applications. As such, VMware continues to enhance vSphere and vSAN’s ability to accommodate the needs of developers and administrators with new features found in vSAN 7 U3.

vSphere with Tanzu provides a unified approach to infrastructure that is uniquely suited for hosting both traditional workloads, and modern, cloud-native applications. For application developers, it is Kubernetes. For vSphere administrators, it is vSphere. For the business, it is a consistent, standardized approach for deploying and managing traditional workloads alongside modern, cloud-native applications, while safeguarding the security, compliance, and control of the IT infrastructure. vSAN 7 U3 introduces an all-new level of flexibility in deploying and scaling container workloads for environments running vSphere with Tanzu.

Using File and Block Based Persistent Volumes in vSphere with Tanzu 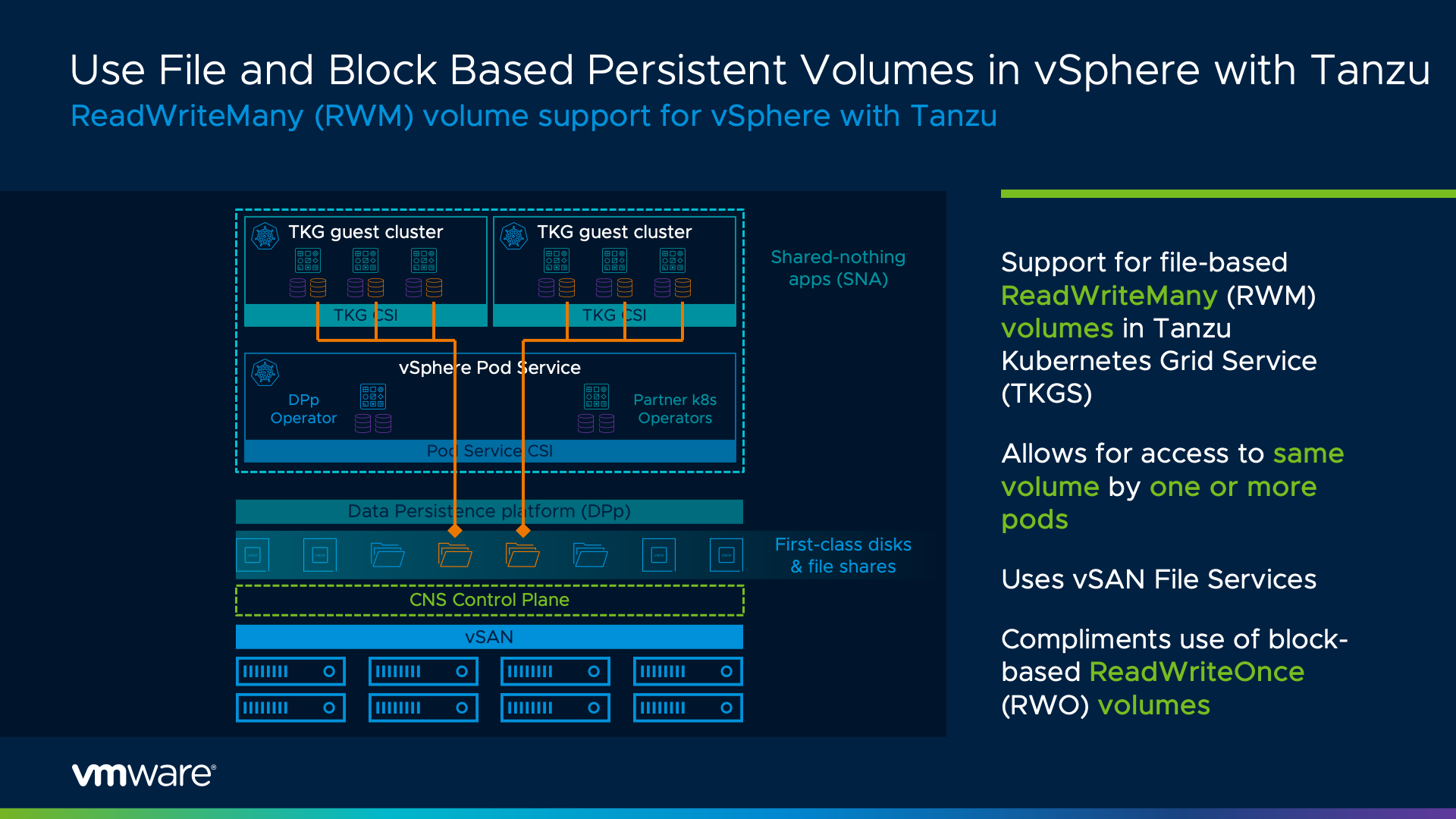 With this latest edition, the use of file-based read-write-many volumes is now supported in vSphere with Tanzu in addition to the block-based read-write-once volumes supported in previous editions. ReadWriteMany volumes are volumes that can be mounted in a Read/Write fashion simultaneously into a number of pods. This is particularly useful for web and app servers that serve the same files - but also for CI systems like Jenkins which can use a shared volume for artifact storage rather than unnecessarily duplicating data and impacting CI performance. This provides new levels of flexibility and efficiency for microservices to simply mount and access the same persistent volume as other pods in the cluster. RWM volumes can be easily exposed to Tanzu Kubernetes Grid (TKG) guest clusters using vSAN file services. 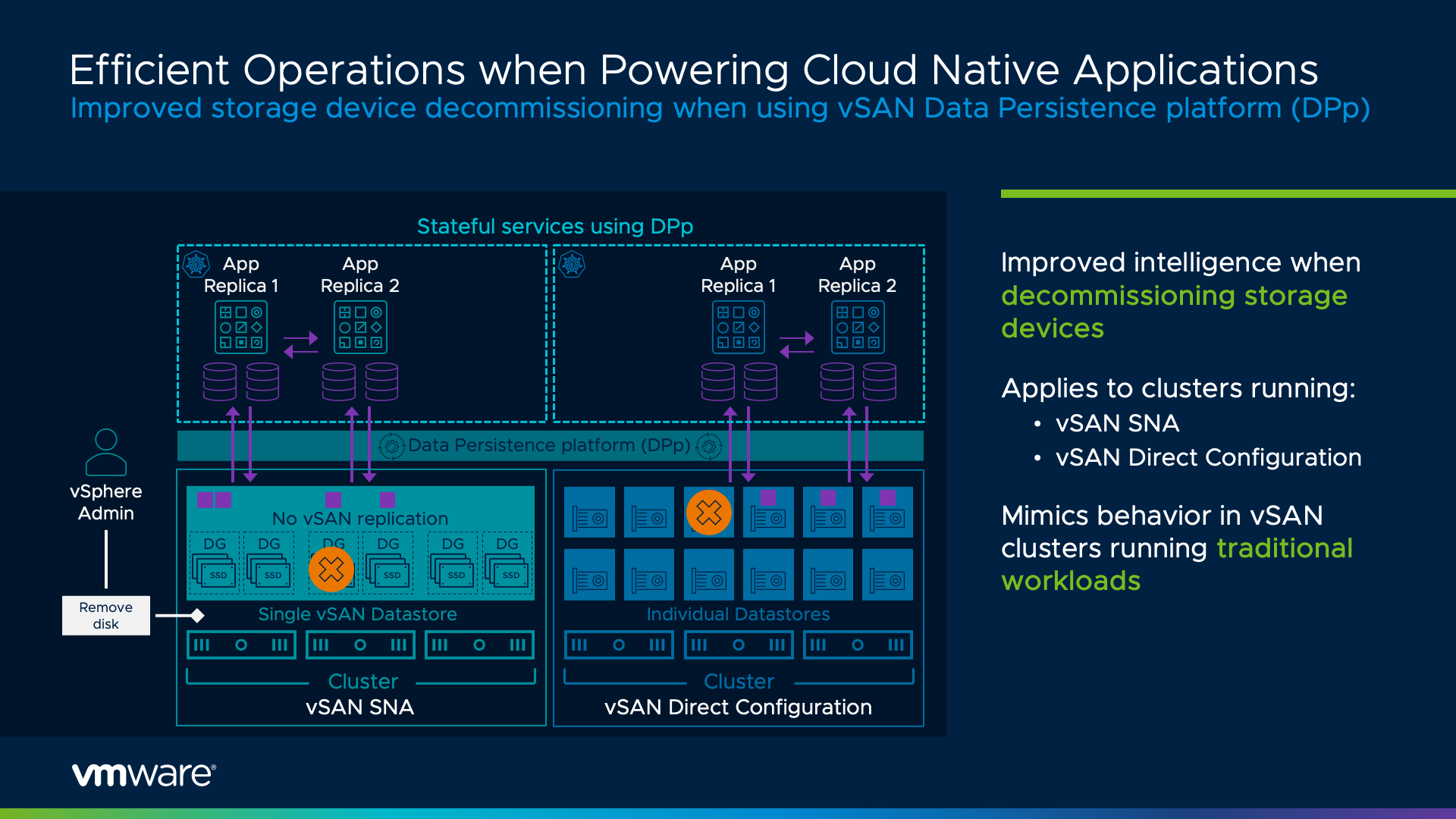 The Data Persistence platform (DPp) is the framework that helps integrate stateful applications in a vSAN environment through easy installation in the vCenter Server user interface. vSAN 7 U3 introduces new capabilities that help with storage device decommissioning, and management of persistent service operators. vSAN clusters that use the DPp will now be able to decommission discrete devices more easily: very similar to vSAN clusters running traditional workloads. Decommissioning discrete devices helps minimize the cost of data movement when compared to host-based evacuation.

With the latest version of vSAN also comes new certified versions of persistent service operators from our Partners. Our Partners, the Independent Software Vendors (ISVs) will be making their announcement around their offerings, but one of the more intriguing aspects of these announcements is that beginning in vSAN 7 U3, the ability for these operators to be updated occurs without the need to upgrade any versions of vSphere, vSAN, or the vCenter Server. The decoupling of the persistent service lifecycle management means easier updates for customers using persistent services. 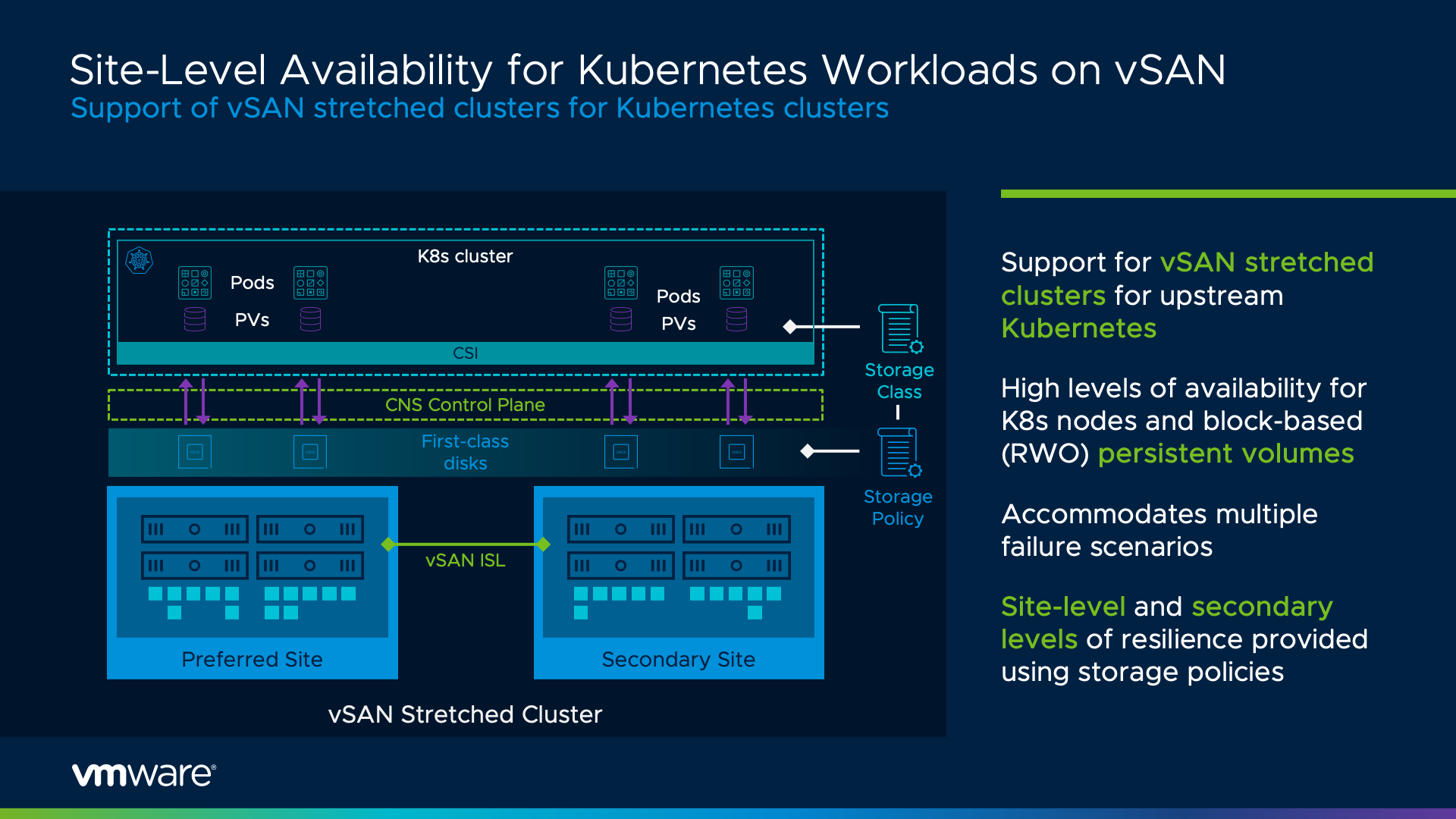 A developer-ready infrastructure must meet the many different requirements of an organization and the developers who build and manage applications. Site-level availability is often one of those requirements. vSAN 7 U3 introduces enhancements to the platform that help accommodate when site-level resilience is needed.

Stretched clusters extend the vSAN cluster from a single site to two sites for a higher level of availability and intersite load balancing. Stretched clusters are typically deployed in environments where the distance between data centers is limited, such as metropolitan or campus environments. You can use stretched clusters to manage planned maintenance and avoid disaster scenarios because maintenance or loss of one site does not affect the overall operation of the cluster. In a stretched cluster configuration, both sites are active sites. If either site fails, vSAN uses the storage on the other site. 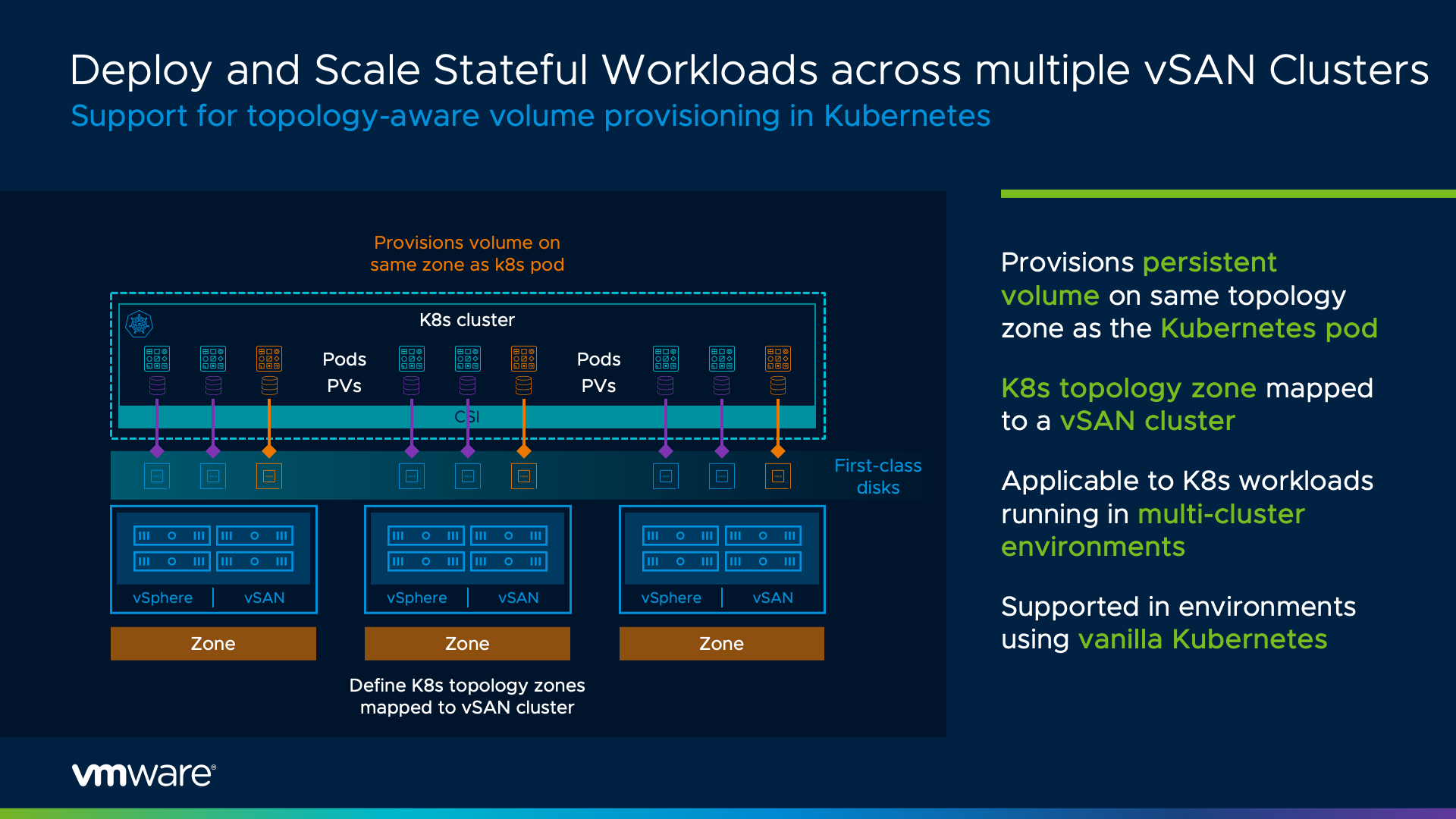 Modern applications are often deployed and scaled automatically, with very little knowledge of the underlying architecture or topology. Some storage systems expose volumes that are not equally accessible by all nodes in a Kubernetes cluster. Instead, volumes may be constrained to some subset of nodes in the cluster. The cluster may be segmented into, for example, “regions” and “zones”, and a given volume may be accessible from one of those groups only. To combat such situations Kubernetes introduced a relatively new feature called "Topology-Aware Volume Provisioning". This feature gives the CSI driver the following abilities:

With vSAN 7 U3, VMware introduces support for “Topology-Aware Volume Provisioning.” This provides a way to define a boundary or a zone that represents the location in which a pod can run, and will ensure that the provisioning of a volume occurs in a location accessible by those pods. vSphere CSI driver currently supports topology on vanilla clusters for block volumes only. For environments running multiple vSAN clusters, this can be especially valuable, as traditional vSAN clusters typically treat storage as an exclusive resource of the cluster. When topology-aware volume provisioning is used pods can be scaled across clusters while ensuring those pods have access to their respective persistent volumes.

With more than 30,000 customers and over 80% of the Global 2000, vSAN continues to innovate. We’re excited to announce the general availability of vSAN 7 Update 3, which delivers flexible, resilient, and future-ready infrastructure. Read more

VMware continues to enhance vSphere and vSAN’s ability to accommodate the needs of developers and administrators. The latest versions of vSAN include several enhancements that further improve efficiency, resilience, performance, and capability. Be sure to run the latest version of vSphere and vSAN to take advantage of these benefits.