Do you enable or disable IO Metrics for Storage DRS

The question has come up a few times regarding whether to activate or deactivate IO Metrics when using Storage DRS.  The answer is; It depends on the usage and setup of the environment.

For example, if you have a single array providing multiple volumes or LUNs for multiple datastores in a datastore cluster, then you want to have IO Metrics enabled. The reason being, the analysis done by my SDRS using IO Metrics will determine the datastores are on the same array by seeing the same IO from different datastores. Subsequently, it won't move a VM from one datastore to another if it sees IO contention because it will not result in any change in performance. This is because the datastores are all on the same array. In this case, SDRS and SIOC will look mostly at capacity and make adjustments accordingly.

If you are using vMSC, the recommendation is to deactivate IO Metrics. See vSphere Storage DRS or vSphere Storage I/O Control support in a vSphere Metro Storage Cluster environment (2042596)

Another possible scenario is with array-based auto-tiering. Some arrays have a function to move data around between different tiers on the array based on how active or "hot"  the data is. In some cases SIOC or IO metrics and array-based auto-tiering can conflict. To avoid this, if possible you will want to install the array vendor's VASA (vSphere Storage APIs for Storage Awareness) provider. The VASA allows Storage DRS to understands storage array advanced features such as deduplication, auto-tiering, snapshotting, replication, thin-provisioning. By using VASA, the array will report whether it is using auto-tiering and vSphere will not use the IO metrics and allow the array to manage data placement on the array itself.

For those arrays that have auto-tiering and do not have a VASA provider, VMware recommends you deactivate "IO balance automation level"  SDRS does not conflict with the auto-tiering process and migrate VMs needlessy. 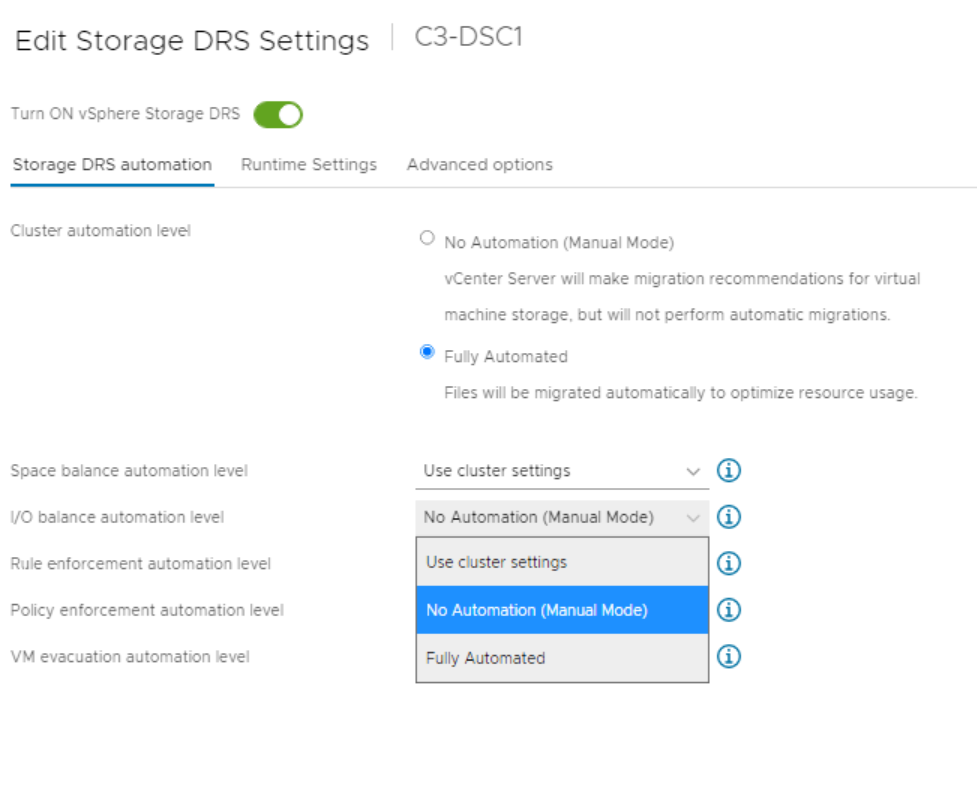 Jason is the vVols and Core Storage Staff Technical Marketing Architect for VMware. Focusing on vSphere vVols and Core Storage technologies as well as working with VMware's storage partners to deliver storage collateral. He came from one of the largest flash and memory manufacturers in the world where he architected and led global teams in virtualization strategies. Working with VMware, he helped test and validate SSDs for VMware vSAN.