NBD transport is the most universal VDDK (Virtual Disk Development Kit) of the backup modes. No dedicated backup proxy VM is required, and it works with all the different datastore types. Subsequently, numerous customers use NBD for their backups. When backups use NBD with vVols and VMFS, they may be limited to a single outstanding IO at a time. Consequently, only when that single IO completes can the next be started. Here it is more efficient to have more IO queued and thus giving the array more to process immediately after it completes an IO. This becomes more important as latency on the array increases. 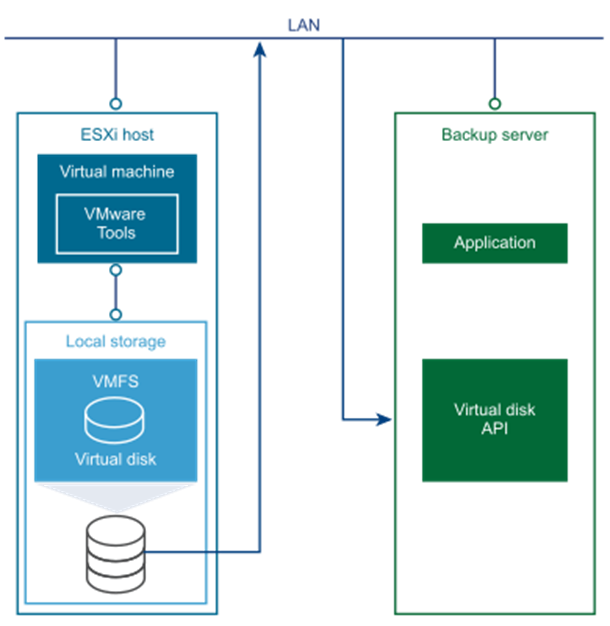 For environments with vSphere 6.7 U3 EP1 or vSphere 7.0 U3 or later, asynchronous I/O for NBD transport mode is available. AIO can improve data transfer speed of NBD transport mode. Performance can increase upwards of 4x in 7.0 U2 or later.

Parallel jobs on one NFC server

ESXi hosts have two NFC servers: one in hostd and the other in vpxa. For connections to vCenter, VDDK as an NFC client connects to the NFC server in vpxa. For connections to ESXi hosts, VDDK connects to the NFC server in hostd. The performance gains are only relevant to NFC and not vpxa.
If programs connect directly to ESXi hosts, the NFC server memory limit in hostd can be increased from default 48MB by editing the /etc/vmware/hostd/config.xml file. If programs connect through vCenter, the NFC memory limit in vpxa is not configurable.
If connecting through vCenter Server, VMware recommends backing up 50 or fewer disks in parallel on a host. The NFC server cannot handle too many requests at the same time. It will queue requests in the list until previous requests have been completed.

With the proper configurations to ESXi NFC, a good backup client using AIO, and larger buffers, we have seen a substantial performance improvement sometimes as high as 10x with vVols.

1) It is highly recommended the VDDK IO buffer multiple of vixDiskLib.nfcAio.Session.BufSizeIn64KB to archive better performance.
2) Memory consumption in NFC server will be increased with larger NFC AIO buffer size and buffer count.

Refer to the VDDK programming guide for more information.