Virtual Desktop Infrastructures (VDI) and virtual application delivery continue to gain momentum throughout this year. An ever-growing demand to support remote workers, security compliance and improvements in hardware technology have resulted in VDI being a practical option for the demands of today's workers.

vSAN has served as an ideal platform for solutions like VMware Horizon to power virtual desktop and VMware App Volumes to present virtual applications independent of a desktop. While VDI deployments are commonly associated with large pools providing desktops to thousands of users, there is a subset of very important users commonly overlooked: Those who run applications that demand the highest levels of performance but wish for a VDI experience that closely resembles working locally on a physical workstation. Let's look at this in more detail to understand why this has been problematic, and how vSAN paired with VMware Horizon helps solve this specific challenge. 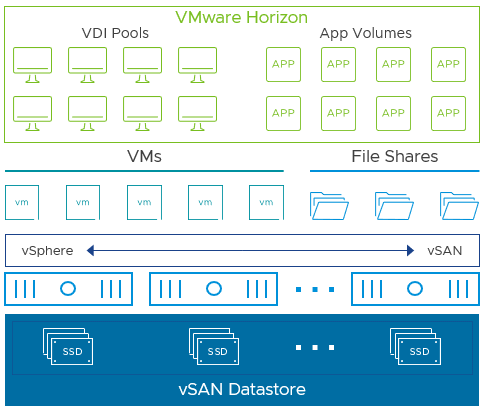 The early days of VDI tended to trivialize the demands of some users. Personas such as "Task Worker" and "Power User" were created to help define typical activities, but these group identities failed to accommodate for the broad variety of use cases these personas represented. Pair this with the high virtual desktop-to-host consolidation ratios required to hit the desired economies of scale at the time, it often resulted in a compromised end-user experience due to insufficient physical resources, or frugal virtual resource allocation of the desktops.

What many designs failed to recognize was the level of resources needed for some of these application use cases. Sometimes the tools used to collect data about desktop usage provided misleading results. Desktop applications were not well understood, and contrary to conventional wisdom, many desktop applications are quite good at multi-threading and using all of the resources available. Some desktop applications also assume the availability of high-end graphics cards - something that isn't always a part of a VDI deployment. While it is not uncommon to see business-critical server applications allocated extraordinary levels of resources (affectionately known as "Monster VMs") in a virtual infrastructure, there can be a similar need for some virtual desktops.

When adding VDI to the mix, care must be taken to ensure that the virtual desktops wouldn’t overwhelm the storage resources. Overwhelming resources can come in one of two ways: Too many VDI desktops based on the average or peak loads, or unplanned levels of resource utilization for the given set of VDI users. The worst-case scenario is when both of those conditions occur simultaneously.

With standalone physical workstations, administrators typically do not have the level of visibility into activities as they do for their virtual environment. Users may be invoking large batch processes that place demands on the CPU, storage, or GPU if available. The resources needed by one virtual desktop could be several orders of magnitude more than the defined persona.

With a VDI topology using a three-tier architecture, these types of activities could easily encroach on important server applications, arbitrarily compromising the priority of one application over the other due to the architecture. Administrators are typically faced with a difficult choice: Spend more on hardware resources, or no longer support those use cases.

Modular Architecture for a Prescriptive VDI Use Case

Unlike traditional storage used in a three-tier architecture, a vSAN cluster provides storage as a resource of the cluster. This helps address one of the key challenges for VDI: Sizing performance and capacity for these unique workloads. If an organization has a subset of these demanding use-cases, a cluster can be built that is tailored to these very resource-hungry workloads while limiting the expense to do so. With the evolution of GPU cards purpose-built for graphics processing in VDI environments, the pairing of these two technologies can be extraordinarily powerful.

Imagine the following scenario. Your organization has a smaller subset of users who run applications like the examples listed below.

Since some desktop processors have stagnated in their core count, this configuration could present some interesting possibilities not available to a physical desktop configuration. 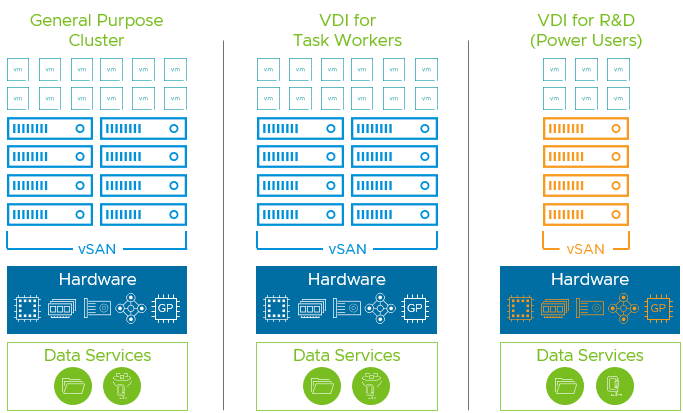 The result is compelling. Optimal performance for a select set of VDI users while not incurring additional expenses or performance challenges of other clusters. These VDI power users running resource-intensive applications gain the benefit of processing data that is close to compute and other data, thereby improving performance. Since storage is treated as a cluster resource, activity in one cluster would not affect the other clusters. Administrators are the beneficiary of improved deployment, management, and security of these systems as they would be managed just like other virtual desktops. This cluster could be scaled out easily - one host at a time - should the need for more users or higher resource usage arise.