VMware SQL with Postgres for Kubernetes (VMware Postgres for K8s) is a relational database-as-a-service that automates the installation, management, monitoring, and updating of containerized Postgres instances running on-premises or in any cloud. The engineering team for VMware Postgres for K8s ended 2022 by reaching a major milestone in the release of version 2.0. Here is a summary of key new features:

Let's unwrap some of the gifts that were delivered in this latest release.

VMware Postgres for K8s has supported High Availability (HA) for VMware Postgres Operator since the initial 1.0 product release. HA offers automatic failover to ensure continuous operations without downtime. The VMware Postgres Operator uses the pg_auto_failover extension to provide a highly available Postgres cluster on K8s. The following diagram shows the topology of the HA cluster configuration, which consists of three pods: one monitor pod, one primary, and one hot-standby mirror. 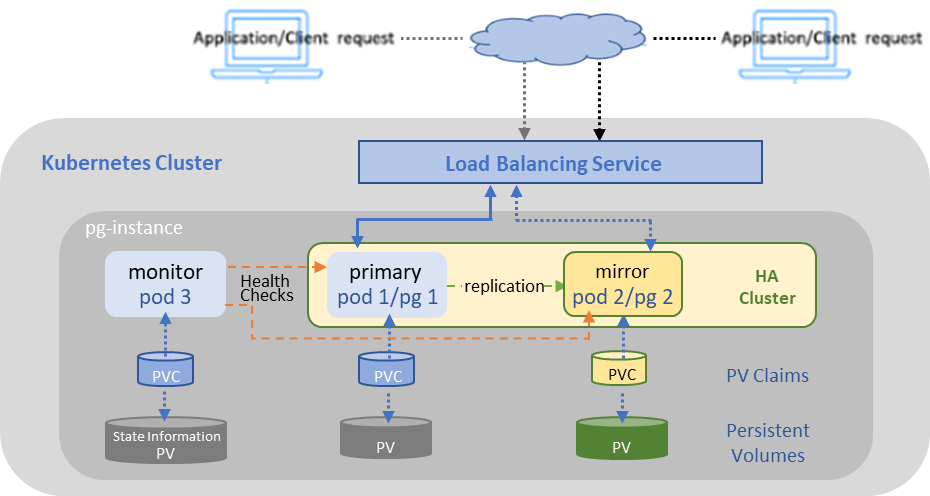 Over time, database performance may deteriorate due to increased load placed on the primary instance. This performance degradation is often a byproduct of increasing read-heavy workloads, like business reporting, that place too much load on a single instance. While HA is used to ensure system availability, it does not increase performance. In this scenario, read replicas are often implemented.

For detailed instructions on implementing read replicas, see the following link to the product documentation.

In VMware Postgres for K8s, deployed Postgres Instances are configured with predetermined PostgreSQL server parameter settings. While these settings may work for most use cases, the latest release allows users to customize the PostgreSQL server parameters for new or existing Postgres instances. As such, VMware Postgres for K8s version 2.0 introduces a new Postgres Custom Resource Definition field called customConfig.

When preparing to customize Postgres instance parameter settings, please refer to the Customizing the PostgreSQL Server section of the product documentation for a detailed listing of the prerequisites, exceptions, and the step-by-step process. The available parameters that can be modified are determined by the PostgreSQL version that is deployed. Not all parameters can be modified, as outlined here. Please refer to the following link for a detailed parameter list.

The parameter customization process is summarized as follows:

1. In the same namespace as your Postgres instance, edit the ConfigMap with the desired parameter changes for your PostgreSQL server. For details refer to Kubernetes ConfigMaps. Below is an example of a ConfigMap: 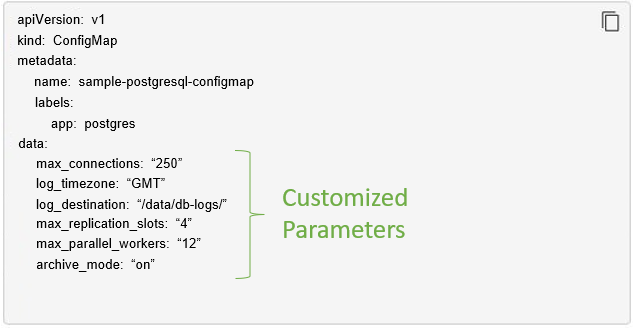 2. Apply the ConfigMap to your Postgres instance:

3. The result of the above command for a new instance will be the following:

The result of the above command for an existing instance will be the following:

4. For new instance deployments, you will need to edit the YAML file for your Postgres instance, modifying the customConfig field to reflect the name of your ConfigMap:

Then deploy the instance with the new customConfig setting as follows:

For existing Postgres instances, apply the changes with the following command:

4. Once the changes have been applied and the Postgres instance has a "Running" status, you can verify the modified parameters by logging into the pods and using the show command as follows: 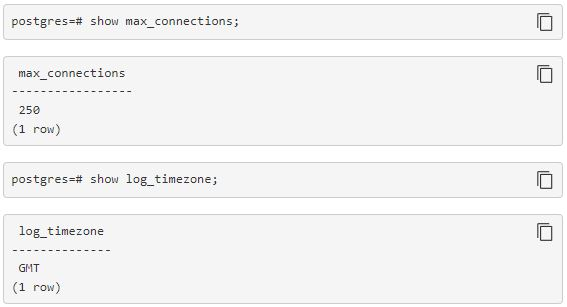 To view the list of supported Postgres versions for your Operator, run the following command:

The command will display the following output:

From the above output, you can see that the 2.0 release supports PostgreSQL database versions 11 through 15. To deploy a specific version other than the default, you will need to modify the Postgres instance manifest file using the values listed under the NAME column. An example of the modified portion of the manifest file will look like the following:

Data is arguably the most critical resource of any organization. The security of sensitive data, such as Personally Identifiable Information (PII) is an essential part of every business. A number of standards, best practices, and regulations have been created to help organizations in their data security efforts. One such standard is the Federal Information Processing Standard, referred to as FIPS.

FIPS is a security standards framework developed by the United States Federal Government that U.S. federal agencies, government contractors, and service providers, are required to comply with in order to work with any federal government entity that collects, stores, and transfers sensitive information. This requirement ensures government data handled by third-party organizations is securely maintained, with the appropriate levels of confidentiality, integrity, and authenticity.

While U.S. Federal Government agencies are required to be FIPS compliant, many organizations have developed information security policies of becoming FIPS compliant, as it makes their organization, its software, and its services seem more secure and trusted.

In VMware Postgres for K8s version 2.0, FIPS is now supported and can be enabled for instances that are version 14 or 15. As stated in the previous section (Postgres 15 Support), VMware Postgres SQL for K8s supports Postgres 11, 12, 13, 14, and 15. However, Postgres 11, 12, and 13 are not FIPS compliant because Postgres provides a built-in md5 function and supports MD5 password encryption instead of delegating to the underlying Openssl library.

Now that you are done unwrapping these gifts, why not try them out?  Use the links below to get started!

Carlos is a Senior Technical Marketing Architect at VMware. With a primary focus on VMware Data Solutions, Carlos covers topics such as data analytics, modernization of data operations, hybrid data platforms, and integration with third-party products.