The post "Write Buffer Sizing in vSAN when Using the Very Latest Hardware" described many of the basics around vSAN's implementation of a two-tier storage system, and how hardware can change the performance of the system.  How do software-related settings such as deduplication and compression impact performance?  Let's step through what it is, how it is implemented on vSAN, and how to better understand if and when it may impact performance.

Data deduplication is a technique that detects when one or more duplicate blocks are found, and uses a hash table to reference a single block of a data structure, instead of storing the same block multiple times.  Data compression will take a given amount of data, such as the content within a block of data, and use encoding techniques to store the data in a more efficient way.  These two techniques are unrelated to each other but attempt to achieve a similar goal: Space efficiency.

How is it implemented in vSAN?

Deduplication and compression (DD&C) in vSAN is enabled at the cluster level, as a single space efficiency feature.  The process occurs as the data is destaged to the capacity tier - well after the write acknowledgments have been sent back to the VM.  Minimizing any form of data manipulation until after the acknowledgment has been sent help keeps write latency seen by the guest VM low.

As data is destaged, the deduplication process will look for opportunities to deduplicate the 4KB blocks of data it finds within a disk group: vSAN's deduplication domain.  This task is followed by the compression process.  If the 4KB block can be compressed by 50% or more, it will do so.  Otherwise, it will leave as-is, and continue destaging the data to the capacity tier.

Figure 1.  Data deduplication and compression during the destaging process

Implementing DD&C in this manner prevents the performance penalties found with inline systems that perform the deduplication prior to sending the write acknowledgment back to the guest.  It also avoids the challenges of deduplicating data already at rest.  While the DD&C process occurs after the write acknowledgment is sent to the guest VM, enabling it in vSAN can impact performance under certain circumstances, which will be discussed below.

vSAN's is a two-tier distributed storage system.  Incoming data is written to a write buffer with the write acknowledgment sent immediately back to the guest for optimal performance, and funneled down to the capacity tier at a time and frequency determined by vSAN.  This architecture provides a higher level of storage performance while keeping the cost per gigabyte/terabyte of capacity reasonable. 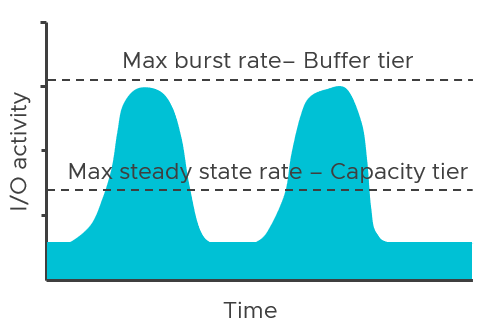 Figure 3.  Visualizing the theoretical maximums of a two-tier system using a time-based graph

The performance maximums of your vSAN hosts will be somewhere in between the maximum burst rate, and the maximum steady-state rate.  Synthetic testing for long periods using HCIBench will stress the environment enough to show these approximate values when looking at the time-based graphs.  Production workloads may hit these maximums in an undersized design.

It's Potential Impact on Performance

Deduplication and compression require effort: Computational effort and the use of RAM and additional I/O that stems from it.  This is true regardless of how it is implemented.  It just depends on when, where, and how it occurs.  In vSAN, since this effort occurs once the data in the write buffer begins to destage, the task reduces the effective destaging throughput to the capacity tier.  This would lower the maximum steady-state rate that the cluster could provide.  In other words, a cluster with DD&C enabled may have similar performance to a cluster with DD&C disabled that use much lower performing capacity tier devices.

Figure 4.  Destaging and maximum steady-state rates are reduced when DD&C is enabled

Assuming all other variables remained the same, lowering the maximum steady-state rate of the capacity tier would demonstrate the following behaviors

vSAN's elevator algorithms detect a variety of conditions that will help determine if, when, and how much destaging should occur.  It gradually introduces the destaging of data, and does not go as fast as it can, but only as fast as it needs to.  This helps keep hot data in the buffer for subsequent overwrites, which reduces unnecessary destaging activity and potential impacts on performance.

RAID-5/6 erasure coding is another space efficiency option enabled at the per VM or per VMDK basis using storage policies.  Using space efficiencies techniques together may also have some notable impacts.  See "Using Space-Efficient Storage Policies (Erasure Coding) with Clusters Running DD&C" (5-12) in the vSAN Operations guide for more information.

vSAN's architecture gives customers numerous options to tailor their clusters to meet their requirements.  Design and sizing correctly means clearly understanding the requirements and priorities.  For example, in a given cluster, is capacity the higher priority, or is it performance?  Are those priorities reflected in the existing hardware and software settings?  Wanting the highest level of performance but choosing the lowest grade componentry while also using space efficiency techniques is a conflict in the objective.  Space efficiency can be a way to achieve capacity requirements but comes with a cost.

Once the priorities are established, adjustments can be made to accommodate the need of the environment.  This could include:

Deduplication and compression is an easy and effective space efficiency feature.  The design of DD&C in vSAN provides a data path that strives to keep guest VM latency low.  While vSAN's two-tier architecture helps minimize impacts on performance, an insufficient hardware configuration or a collection of high-demand workloads may overwhelm the configuration enough to where VMs may see increased latency. Thanks to the flexibility of vSAN, you can tailor your settings and hardware configurations to accommodate the demands of your workloads.