I miss the deprivations of the past. I am not alone. I read an author nostalgic for fruit being out of season…because it was so special when it was in season. He noted that while blueberries still have a season when they are cheapest and best, there is never a time when you can't get them at all.

For myself, I miss movies that you could only see once a year when they were on TV — on one of three American broadcast channels. It's hard to cherish a movie when it is always available. I don't want to watch something if I can just as well watch it next week.

But this blog is about six features and updates of the Bitfusion 4.0.0 release that I would miss if they went away — and also, six movies that used to be on TV in the 60's and 70's.

VMware's vSphere Bitfusion allows you to create pools of GPU servers from which remote GPU services can be dynamically allocated to client VMs running AI/ML applications.

Six movies Bitfusion barred from viewing, until now…number three will drive you mad!

The Wizard of Oz is the Ur movie of annually anticipated movies. The first time I watched it at age 6 we went to the neighbors because they had a color TV and we could enjoy the transition from black-and-white Kansas to living-color Munchkinland. Although a favorite of children and having a happy ending, its dark scenes — scary forests, flying monkeys, the Wicked Witch of the West — scared a lot of young fans. But now, Bitfusion has a dark side, too…

GUIs with light and dark modes, respectively, display dark text on a light background or light text on a dark background. Internet sites disagree about GUI dark mode. Save energy! Reduce eye strain in low light! Passing fad! But vCenter has it and with release 4.0.0, the Bitfusion plugin supports it.

These screen shots are all the explanation you need to form your own opinion, go online, and argue with the opposing tribes. 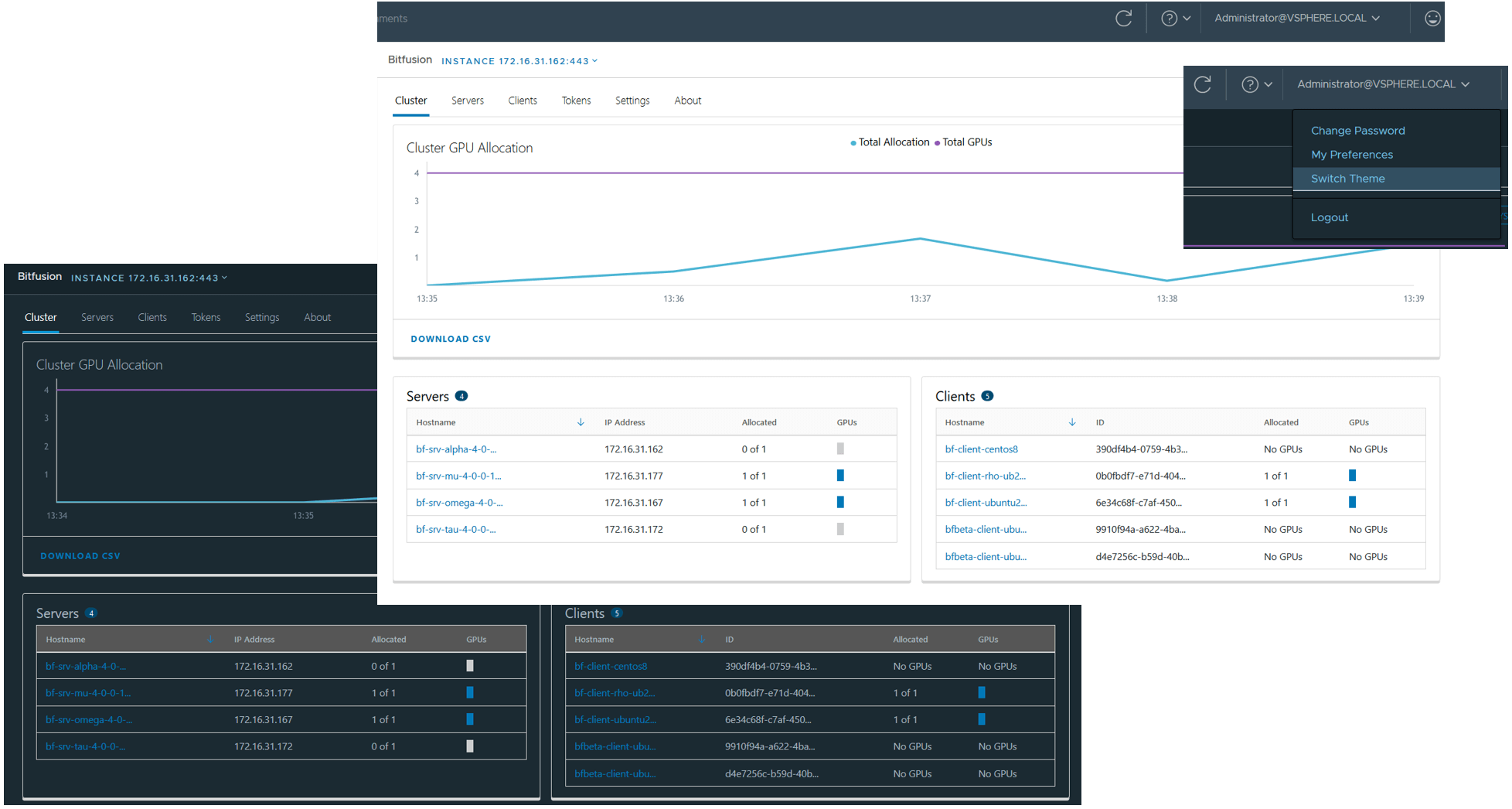 1972 brought a late entry to the category of annually broadcast movies. But it was brilliant. What's Up, Doc? delivered a screwball comedy with odd characters, clever dialog, and chaos that built and built to a fantastic, hilarious resolution. This is incredibly difficult to do. Every choice requires careful filtering. It has to proceed with the most careful contradictions: logical, yet impossible, believable, yet ridiculous. If you credit the construction, you'll covet the collapse.  Now, Bitfusion allows you to filter your GPU choices… 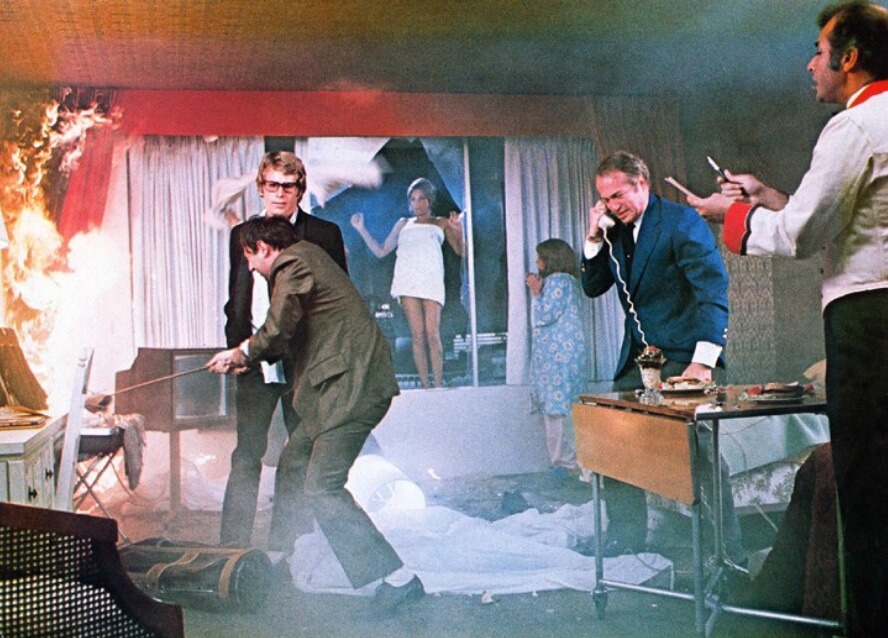 Comedy gold or deadly dross? You can filter the funny from the flop by how organically the chaos is set up

Many customers ask me how to allocate particular GPU types with a Bitfusion run command.  Until this release I told them to populate servers with one GPU family and then use the -l switch to supply a list of the servers with the desired family. Bitfusion 4.0.0 now has a direct and expanded filtering capability. You can start applications on GPUs and servers with specific properties.

Here is a command to allocate one GPU and start an application, but not yet using filters (this is a fictional ML app for example purposes).

Now, let us introduce a filter so you will only run "hello_gpu.py on GPUs belonging to the T4 family.

With this filter we limit our search to Bitfusion servers with the substring, "Turing" in their hostname.

To filter for a minimum amount of GPU framebuffer memory (in MB):

I recommend keeping the filter value between quotes so you don't have to chase down errors where the shell is processing spaces or special characters.

You can also filter on device capability and index number and you can filter on server address, CUDA version and driver version. The 4.0.0 User Guide gives complete filter details.

Kubernetes Secrets — "It's buried under a big 'W'"

More than 20 big-name comedians and major stars appeared in It's a Mad, Mad, Mad, Mad World.  The cast count reached 50 even before you got to folks who didn't make the credits (including Jack Benny!). As a group of strangers help a man in a hurry who drove his car off a cliff, he tells them of some buried money he was heading for, just before he kicks the bucket. More and more of the ensemble cast is drawn into the secret, the mayhem, and the chase for the cash. My brother and I, holed up in our room watching it while my parents hosted a party one evening, made some money of our own off this movie. Several party guests, men, burst in and paid us to turn the channel for the end of a basketball game. We failed keeping this secret from my parents. Now, Bitfusion coughs up its secrets to Kubernetes and smooths its orchestration…

Kubernetes allows you pass "secrets", objects such as passwords or tokens, into a runtime environment without having to openly put this information into a pod specification or build it into a container image. Bitfusion clients need a token to successfully access GPU resources on Bitfusion servers. The 4.0.0 release can now publish its tokens as Kubernetes secrets.

Enabling the pods to access Bitfusion servers is easy work (assuming you have already set up a working Kubernetes cluster — check out the vSphere with Tanzu Quick Start Guide).

You can find the complete "Kubernetes secrets" instructions in the last half of the Activate the vSphere Bitfusion Client page of the Bitfusion Installation Guide.

If you are new to Kubernetes, however, the following diagram might make these instructions clearer.

The process to create a Bitfusion token as a Kubernetes secret

The left box (orange) is the machine the administrator uses to run the Kubernetes cluster (e.g. running kubectl commands). This machine has a Kubeconfig file specifying the Kubernetes cluster's URL and crypto string.  This file is needed by vCenter Server to publish secrets on the cluster. Once you browse to vCenter Server from the administrators machine, navigate to the "Tokens" tab of the Bitfusion plug-in.  From there, you can upload the Kubeconfig file and go through all other steps to create and publish the token.  Again, these steps are detailed in the Bitfusion Installation Guide. Additionally, you have to edit a pods yaml file to map to the secrets you have just published. The mapping is also described in the Installation Guide.

The full quote. brag, from Davy Crockett: King of the Wild Frontier just gets better. This movie was often broadcast in three parts, one hour each Sunday evening on reruns of The Wonderful World of Disney. Certainly a hagiography of the American folk hero, it was a fun one; and a boy needs heroes. With the final, fatal last stand at the Alamo, it instilled in my psyche the importance of bravery, of retaining your principles even at the cost of your life (at age seven this is a pretty casual commitment). Now, Bitfusion retains its GPU usage and allocation data under policies you dictate, at an acceptable cost…

[OMINOUS MUSIC] As clients allocate GPUs, access its memory, use its cores, Bitfusion is watching. Bitfusion is recording.  Bitfusion remembers… [MUSIC SCREECHES TO A HALT]  Well, Bitfusion servers have a database of metrics and usage records; that is what it is supposed to do. However, storage can fill up, so Bitfusion throws old data away to make room for new metrics. Bitfusion also keeps summarized data that consume less space than full detailed records. With release 4.0.0, Bitfusion gives you control over the retention policies. You can:

These settings are shown below. 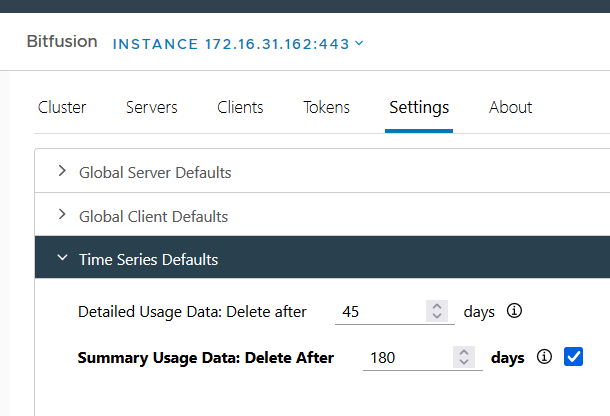 Monitoring Plug-ins — "I can't fly. I haven't got my wings."

As a Christmas movie It's a Wonderful Life is the one movie that is still broadcast once a year. And I watch it almost every year. A despondent George Bailey, never able to escape small town duties and family to achieve the dreams and adventures he'd had since childhood, crushed by the incompetence of fellows and the perfidy of a scheming, rich and powerful enemy, facing bankruptcy, scandal and prison, he contemplates suicide. He is rescued by an angel who has monitored his whole life and shows him how much worse the world would have been without his kindness, goodness, and integrity. Plus Christmas. Now, Bitfusion makes it easy to monitor its servers. Will it make your life wonderful…?

There is a Linux monitoring-plugins package we now pre-install on Bitfusion servers. It contains more than fifty standard plugins for Icinga, Naemon, Nagios, Shinken, Sensu, and other monitoring applications. Each plugin is a stand-alone command line tool that provides a specific type of check. Typically, your monitoring software runs these plugins to determine the current status of hosts and services on your network. Some of the provided plugins let you check local system metrics such as load averages, processes, or disk space usage.

Next, from the account/machine that you use for monitoring,  copy your public key into the monitoring user's authorized_key file on the Bitfusion server.

And now you can run a quick test. On the machine you use for monitoring, install the monitoring plugins and run a Nagios command to check disk space on the Bitfusion server.

Supported Versions — "As God is my witness, I'll never be hungry again"

This may be the movie that defined the word, epic. Gone with the Wind spanned history and geography, love and war, history and family, comedy and tragedy. Complicated characters, not truly heroes, not truly villains, struggle through the Civil War in the American South. What can they and what should they support as everything is swept away?  Now, Bitfusion updates its support matrix, but just with deprecation notices…

Bitfusion, in a coming release, will deprecate support for clients running Bitfusion 2.x.x. Soon it will be gone, too.

Conclusion — "You didn't forget me, did you?"

Were I to include a seventh movie in my list it would be Heidi (1968). Perhaps not an all-time great, but it is a wonderful story and had a great cast (and John Williams did the music).  It was the first movie I let my older sister talk me into watching even though I thought it would be stupid and it ended up teaching me there were marvelous things to enjoy that I hadn't imagined before. She demonstrated such facility for me more than once. Of course, this was the same sister who prevented me from watching Jaws and Psycho, so her record wasn't perfect. Now, a quick recap of Bitfusion's new facilities…

I'm most happy about the new filtering capabilities, having anticipated them for so long, but Kubernetes secrets, the monitoring, and the retention policy management are all excellent updates.  And with the new theme, there's no longer reason to fear the dark.