vSphere Lifecycle Manager (vLCM) is a powerful framework based on a desired-state model to deliver simple, reliable, and consistent lifecycle operations for vSphere and HCI clusters. Simplified operations mean predictable outcomes, and this is why VMware continues to make significant investments in improving the resilience and flexibility of operations with vSAN. vSAN 7 Update 3 introduces a series of enhancements that was a direct result of feedback from our customers. Beyond enhancements that improve the robustness of vSAN, the improved operational handling includes support for vSAN topologies using dedicated witness host appliances. This post focuses specifically on the enhancements to vSphere Lifecycle Manager in vSAN 7 Update 3 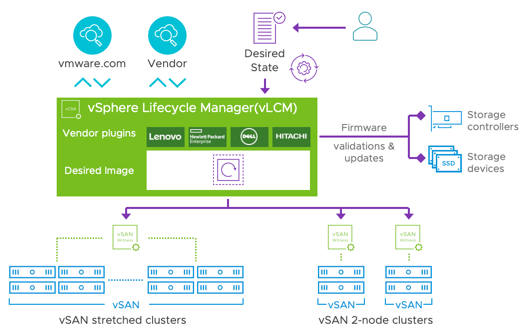 Lifecycle management has historically been a time-consuming and complex process. Administrators need to find the right balance between software, firmware and drivers that are current but also supported on the VCG. This can involve several tools and considerable time and effort. vSphere Lifecycle Manager in vSphere 7 reduced the complexity of monitoring and maintaining hyper-converged infrastructure by consolidating software, driver, and firmware update tools and introducing a desired-state model of implementing a desired image. vSphere 7 U3 extends these capabilities with support for storage device validation via HCL and witness host appliance for Stretched Clusters and 2-Node clusters. vSphere Lifecycle Manager delivers simple, reliable, and consistent lifecycle operations for vSphere and HCI clusters and ESXi hosts.