Why do I need independent connections to the Witness Appliance in a VMware vSAN stretched cluster?

The year was 2009 and my pager went off and interrupted dinner. A DRDB cluster that lacked proper fencing had experienced a failure and data was coming up severely out of date in the application. I didn’t know it then but something terrible had happened and I would miss sleep for 3 days trying to put the pieces back together. If only vSAN had existed back then, and my life would have been simpler. We will revisit this incident in a bit, for now, there is a more important question to address first.

Why do I need independent connections to the Witness in a vSAN stretched Cluster?

This question comes up from time to time. You have two datacenters near each other, and want to run a vSAN stretched cluster (Great idea!). You have a 3rd location to place the witness appliance (Awesome!). They then look at connectivity between the sites and discover that both data centers do not have independent connectivity and both datacenters are depending on one datacenter to reach the witness. This is a problem as vSAN does not support this configuration.

vSAN requires that in the event a data center fails, the remaining site can still reach the witness. Why is this? 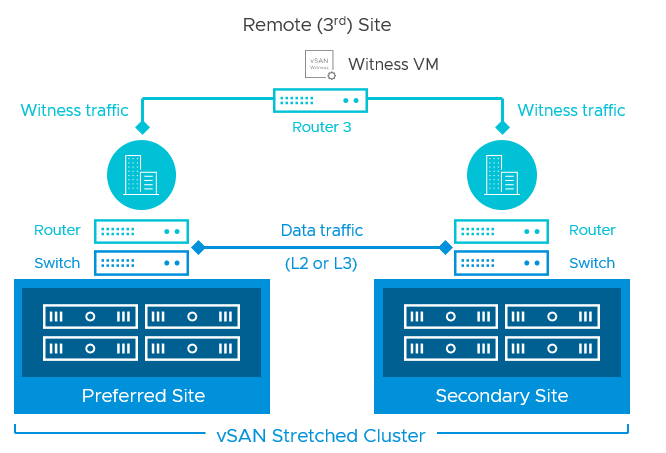 The short answer is CAP theorem. This states that it is impossible for a distributed data store to simultaneously provide more than two out of the following three guarantees.

In the presence of a network partition (a site becoming fully isolated from the other 2 sites) a choice had to be made by vSAN’s designers.

vSAN chose the former approach, which is to always “fail-safe” and prioritize data integrity at all costs. This is the design decision of most if not all modern enterprise storage platforms that run as a scale-out distributed system. Distributed systems that follow the latter approach tend to be stateless systems (like a firewall) that do not cause irreparable harm in the event of a split-brain scenario.

The DRDB cluster I had to fix in 2009, lacked this design decision. A network partition had allowed both instances of DRDB to go active (Split-Brain) and process IO. This created a shadow copy of the database server volume. A subsequent failure of the other node led to this shadow copy of the old database accepting new data transactions. It took days to resync the data Some datasets having to be entered by hand due to lost transactions. DRDB was abandoned shortly after this incident.

What are my options to overcome the witness connectivity requirement?

There are a few solutions to this problem of how to be able to survive a datacenter failure when you lack property connectivity to build a stretched cluster.