We discuss in this article the use of containers for running AI and ML applications and why these applications might benefit from sharing access to remote and partial GPUs with VMware vSphere Bitfusion. The bulk of this blog, however, will be a detailed example of how to run a TensorFlow application in a containerized Bitfusion environment with remote GPU access.

Why Artificial May be the Real Thing

Artificial Intelligence and Machine Learning (AI/ML) applications are proliferating at an extraordinary rate because of their potential to perform “mental” tasks that traditional computation could not do well. They automate, at low cost, tasks that only people could perform before, not to mention tasks that could not be done at all. They may do these tasks with greater speed, consistency, and with no fatigue. If you need a general-purpose description, AI/ML works by throwing large collections of data (images, financial records, email chains or other text, statistical data on freeway traffic, etc., etc.) into the maw of statistical or other computational models that gradually learn, “by themselves,” to identify trends and patterns in that type of data.

You’ll probably note that the division between the consumer and corporate apps is not that sharp.

What’s the deal with containers? They are part of that landscape that supports “modern apps”. The modern app, definitionally, can be a little fuzzy, but from a certain perspective you can think of it as just a list of demands that must be fulfilled so the app can keep its company from bankruptcy. It must run somewhere where it can be updated all the time. It must be broken into modular microservices (for modular testing, to isolate issues, to support frequent changes, to increase performance through concurrency). It must be fault tolerant. Each microservice must be written in the language and environment best suited for itself. It must be high-quality. This list goes on.

The Most Original Software Ever in the Whole Wide World

Since AI/ML is a new type of application, we should look at its requirements and make sure we can meet them. There are two requirements we are considering here.

You will likely want to use hardware acceleration (a GPU, typically) to run your AI/ML application. The amount of computation to run these applications is one, two, or more orders of magnitude greater than traditional ones. An application running on a CPU might take an hour of time to do what you can do in 10 seconds on a GPU. Think of running thousands and thousands of operations on every pixel of thousands and thousands of high-definition pictures to get an idea of the scale. GPUs can perform the necessary type of math on hundreds of highly parallel cores. GPUs scale those orders of magnitude back down into a useful time domain.

Fortunately, it is easy enough to meet both of these requirements at the same time. You can buy GPUs, employ the software switches to pass them into container, and hand them over to the app running within.

But there is always one last requirement. Money.

GPUs have traditionally been difficult to share. As a piece of hardware sitting on a bus, only the software running local to that bus has been able to access it. If you move the software, you lose access. Even worse, two virtual machines, both running locally to a GPU, cannot share it. A GPU must be passed exclusively to one VM or the other. Compounding that, a single user, VM, or application seldom uses the GPU efficiently. It is not atypical for GPUs to sit idle 85% of the time. The industry average on this is hard to obtain, and it varies a lot from use-case to use-case. But if the price of a GPU seems high, it seems even higher when it is underutilized to this extent.

Enter VMware vSphere Bitfusion. It lets you share GPUs in two ways. Bitfusion sets up a pool of GPU servers, and gives GPU access, remotely, across the network, to applications or microservices running on client VMs or containers set up for each piece of software. GPUs, over the course of time, can “fly” from one application to another, being allocated and deallocated dynamically whenever an application needs hardware acceleration. Bitfusion also partitions GPUs into fractions of arbitrary size (it is the GPU memory that is partitioned), so the GPU can be used concurrently by multiple applications. All this raises the utilization and efficiency of the precious GPU resources.

These types of sharing address not only modern apps and acceleration requirements, but cost concerns too. You get to eat your cake, have it too, and give your sister a slice of her own.

The Brew that is True 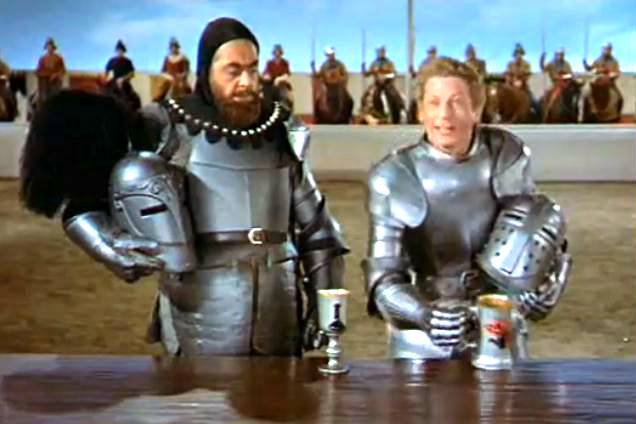 At this point you are either itching to run an ML app in a container with Bitfusion or wondering how you ended up in an alternate universe reading a blog you are sure you already stopped perusing (if the latter, take the time, instead, to see if the humor in a 64 year-old movie holds up). So here is the fastest recipe we know to run a containerized TensorFlow benchmark using remote GPUs with Bitfusion. We will assume you have already followed the Bitfusion Installation Guide and created a Bitfusion cluster. (At the time of this writing Bitfusion is just a few weeks from release, and the example below will use beta code)

This recipe uses an NGC base image from NVIDIA. The NGC image comes with most of the software you need, has ensured the software versions are mutually compatible, and has tested everything for stability and completeness. The additional steps you need to take for Bitfusion are few.

The goal here is to run a containerized ML application (TensorFlow) using virtual GPUs provided by Bitfusion. The major steps are:

For the sake of completeness, this document will also show how to install Docker, but we encourage you to visit the Docker website if you want the latest, official instructions.

The process demonstrated here will use a Dockerfile to create the container. You can follow the steps in the Dockerfile to do it by hand if that allows you to explore or modify the process for your situation.

The Dockerfile assumes the existence in your current directory of the Bitfusion client deb package (for Ubuntu 16.04).

Use vCenter to configure and authorize the client VM where you will run your container: 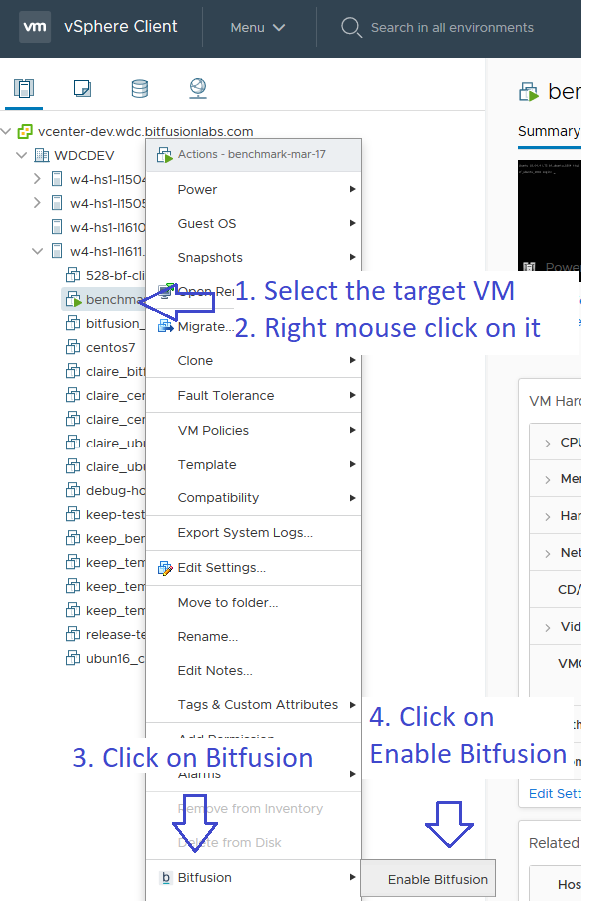 Bitfusion runs on Ubuntu 16.04 and 18.04 and on CentOS 7 and RHEL 7 distributions. Below are instructions for installing docker. See the Docker website for details and official guidance.

B. CentOS and RHEL

In one directory have two files. At this writing the Bitfusion package can be obtained from the VMware Bitfusion beta community site. After GA, packages will be available at a repository:

Here is the Dockerfile.

4. Build the Image and Container

Below are two Docker commands. The first command builds an image we name, bfbeta-ngc1903-ub16-tf1-13. The second command, run, will give you a command line in the container instance of this image. The run command mounts two host directories in the container:

After the previous step, your prompt will be inside the container and you will be root.

Now you can run TensorFlow benchmarks. Two commands are shown below, one assumes you have a data set, while the second uses synthesized data. Note: the bitfusion run command uses the -n 1 option to allocate 1 remote GPU for the benchmark, thus matching the number of GPUs that the benchmark itself expects to use due to its option, --num_gpus=1.

Going against the best advice, everyone eventually asks, “What’s in the sausage?” In this case, the caution seems unwarranted. We’ve seen a wholesome mix of technologies stuffed in a wrapper of low-denomination bills. We can run a modern ML application, we can run it in the environment made for it—containers—plus, we can run it with hardware acceleration. And vSphere Bitfusion delivers this mix with shared GPUs, making everything very affordable and efficient. We also note that the steps to do this, or the Dockerfile to set this up, are simple and minimal.