With the list of priorities growing daily, hospital IT departments struggle to just maintain critical systems. IT projects like migrating workloads to the cloud are often postponed or delayed indefinitely due to lack of resources or cloud expertise. Unfortunately, it is these very workloads that would benefit from cloud like features such as workload isolation and dynamic network segmentation.

Continuing to delay these projects comes at cost, either a hardware failure or mandatory upgrade reshuffles the project to an escalation. This escalation cycle vs. project repeats itself. How can hospitals manage these projects before they become escalated priorities and is there a way to migrate to the cloud without the additional recourses and expertise?

VMware Cloud Foundation™ is an integrated software platform that automates the deployment and lifecycle management of a complete software-defined data center (SDDC) on a standardized hyperconverged architecture. It can be deployed on premises on a broad range of supported hardware or consumed as a service in the public cloud (VMware Cloud™ on AWS or a VMware Cloud Provider™). With the integrated cloud management capabilities, the result is a hybrid cloud platform that can span private and public environments, offering a consistent operational model based on well-known VMware vSphere® tools and processes, and the freedom to run apps anywhere without the complexity of app re-writing.

This document outlines the best practices for Epic Operational and Analytic Databases on VMware Cloud Foundation 4.2.

The technology components in this solution are:

VMware vSphere is VMware's virtualization platform, which transforms data centers into aggregated computing infrastructures that include CPU, storage, and networking resources. vSphere manages these infrastructures as a unified operating environment and provides operators with the tools to administer the data centers that participate in that environment. The two core components of vSphere are ESXi and vCenter Server. ESXi is the virtualization platform where you create and run virtual machines and virtual appliances. vCenter Server is the service through which is used to manage multiple hosts connected in a network and pool host resources.

VMware vSAN is the industry-leading software powering VMware’s software defined storage and HCI solution. vSAN helps customers evolve their data center without risk, control IT costs and scale to tomorrow’s business needs. vSAN, native to the market-leading hypervisor, delivers flash-optimized, secure storage for all of your critical vSphere workloads, and is built on industry-standard x86 servers and components that help lower TCO in comparison to traditional storage. It delivers the agility to easily scale IT and offers the industry’s first native Hyperconverged Infrastructure (HCI) encryption.

VMware NSX Data Center is the network virtualization and security platform that enables the virtual cloud network, a software-defined approach to networking that extends across data centers, clouds, and application frameworks. With NSX Data Center, networking and security are brought closer to the application wherever it’s running, from virtual machines to containers to bare metal. Like the operational model of VMs, networks can be provisioned and managed independent of underlying hardware. NSX Data Center reproduces the entire network model in software, enabling any network topology—from simple to complex multitier networks—to be created and provisioned in seconds. Users can create multiple virtual networks with diverse requirements, leveraging a combination of the services offered via NSX or from a broad ecosystem of third-party integrations ranging from next-generation firewalls to performance management solutions to build inherently more agile and secure environments. These services can then be extended to a variety of endpoints within and across clouds.

Epic licenses and uses InterSystems Caché and IRIS for the operational database to store and manage patient records, IRIS being the newer database. Within Caché and IRIS data can be modeled and stored as tables, objects, or multidimensional arrays. Different models can seamlessly access data—without the need for performance-killing mapping between models. All three access methods can be simultaneously used on the same data with full concurrency. Thus, making it ideal for use in hospital environments where thousands of clinicians could be accessing and manipulating the same data.

Epic leverages many features and functions from Caché and IRIS; however, one important note are the two main deployment architectures that Epic uses:

- Enterprise Cache Protocol (ECP) A tiered architecture in which users access the data server via a pool of application servers. All data still resides on the data server. ECP is used in some of Epic’s largest customers.

We leverage the following monitoring and benchmark tools for our functional testing for the operational and analytic databases on VMware Cloud Foundation.

vSAN Performance Service is used to monitor the performance of the vSAN environment through the vSphere Client. The performance service collects and analyzes performance statistics and displays the data in a graphical format. You can use the performance charts to manage your workload and determine the root cause of problems.

VMware Skyline Health Diagnostics is a self-service diagnostics platform. It helps to detect and provide remediation to issues in the vSphere and vSAN product line. It provides recommendations in the form of a Knowledge Base article or procedure to remediate issues. It uses the log files of these products to detect issues. vSphere administrators can use this tool to troubleshoot issues before contacting VMware Global Support Service.

GenerateIO is a test tool provided and designed by Epic to simulate the workload I/O of the Operational Database.

With both test tools, the results are gathered at the end of each test run and sent to Epic for consultation.

As part of the research for this guide, we test with the below hardware. Note that this hardware simply serves as a baseline. Refer to the Epic Hardware Guide and the vSAN HCG for the most recent hardware recommendations. Each VMware Cloud Foundation node has the following configuration:

Although VMware vSAN supports a wide range of hardware for optimal performance with applications such as EHRs, we recommend the following storage best practices:

Figure 1 shows the VMware vSphere Distributed Switches configuration for the workload domain of the VMware Cloud. Two 25 GbE vmnics were used and configured with teaming policies. 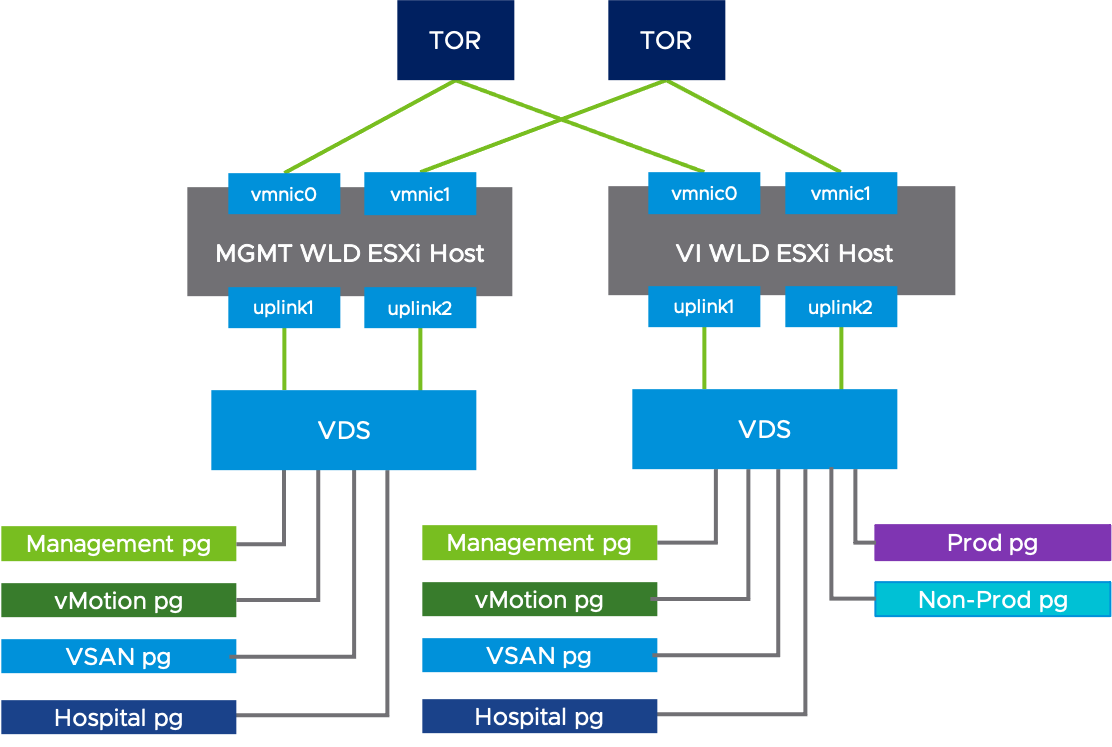 In our test environment, we deployed a 6-node Virtual Infrastructure (VI) Workload Domain to validate the Epic database workloads and a 4-node Management Workload Domain. We consulted with Epic lead architects and followed their best practices. Epic testing and recommendations methodology are quite strict and with the onset of Hyperconverged Infrastructure, they asked VMware to test additional workloads and scenarios.

With our Database vSAN cluster, both performance and availability are the driving factors; thus, we used (6) nodes that allow us to set Failures to Tolerate to 2 (FTT=2). The architecture illustrated above delivers the required performance for Epic ODB. We found that while using RAID1 for the ODB’s VDMK’s and running an aggressive IO test that vSAN maintains the required IO response time.  This configuration is designed for a small Epic customer. This cluster size can scale to what is required in Epic’s Hardware configuration guide.

In our design, we used different storage policies for the Epic workloads. Table 4 shows the detailed configuration. 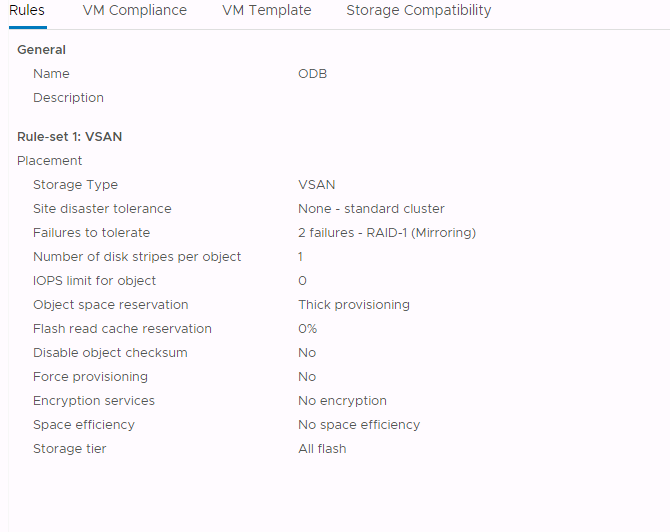 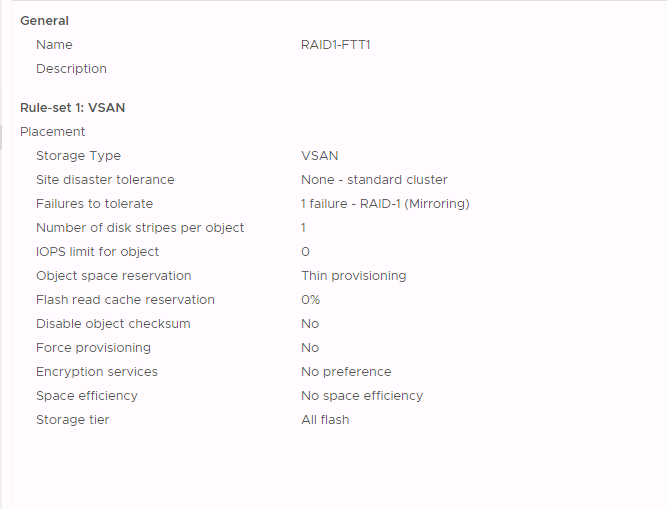 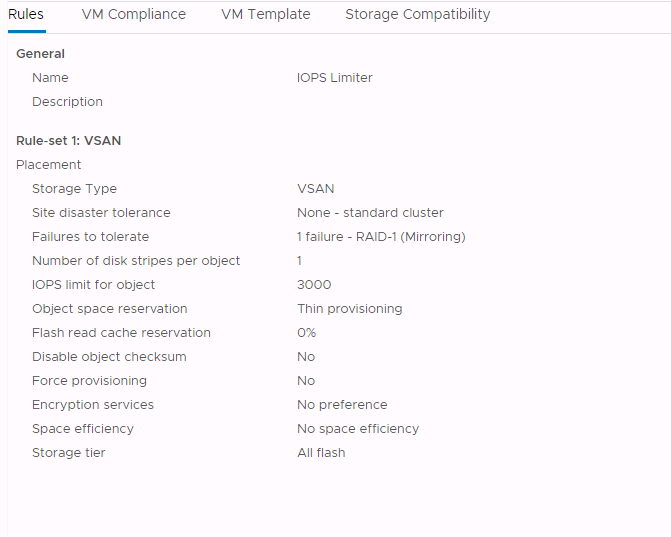 During our test cycles, we concluded, with Epic’s guidance, the use of the IOPS Limiter Storage Policy would be beneficial to prevent any performance impact to the ODB environment in the event of an unplanned IO change. As noted in Table 4, we recommend the IOPS Limiter with 3,000 IOPS per VMDK with FTT=1 to be the vSAN Default Storage Policy. We also recommend using FTT=2 for both PROD ODB and NON-PROD ODB. This gives the ODB environment the ability to handle two failures within the vSAN cluster prior to the ODB failing over to the DR site. Lastly, we recommend using RAID1 for all VMs and VMDKs in the Database cluster. RAID1 will deliver the performance that the Operational and Analytical databases require.

With mission critical workloads such as an EHR, we recommend using the default setting of Checksum. vSAN uses end-to-end checksum to ensure the integrity of data by confirming that each copy of a file is exactly the same as the source file. The system checks the validity of the data during read/write operations, and if an error is detected, vSAN repairs the data or reports the error. If a checksum mismatch is detected, vSAN automatically repairs the data by overwriting the incorrect data with the correct data. Also, we recommend disabling deduplication and compression as it may impact application response time.

Table 5 shows the software resources used in this solution.

Christian Rauber, staff solutions architect in the Solutions Architecture team of the Cloud Platform Business Unit, wrote the original version of this paper.