A typical EHR environment usually consists of several different storage arrays coupled with dozens of hosts. Healthcare IT departments must not only administer and maintain this environment, they must also publish new applications, provision new hardware, and investigate new technologies. Given these mandates, many Healthcare IT CTOs are looking to lower costs. Expanding IT departments to host large scale data centers isn’t a goal for most hospitals. This presents a challenge to most healthcare providers today: how does a hospital provide its clinicians and patients cutting-edge technology on a robust and responsive infrastructure without increasing costs and impacting patient care?

VMware can answer the challenge by hosting these core business functions on VMware vSAN™. Adopting vSAN minimizes the need to maintain legacy infrastructure and is capable of delivering mission-critical response times. vSAN is enterprise-class, storage virtualization software that, when combined with vSphere, allows administrators to manage compute and storage with a single platform. There is no need to deploy or maintain separate arrays and storage networking hardware with VMware vSAN. Its policy-based management removes the burden of provisioning and modifying numerous LUNs and data services. With its consistency and flexibility, VMware vSAN architecture provides the simplest path from server virtualization to hyperconverged infrastructure and a true hybrid cloud architecture.

In this document, we showcase VMware best practices and design guidelines for the Epic Operational and Analytical databases on VMware vSAN.

VMware and Epic have conducted the initial testing that has indicated that vSAN is acceptable performance at small to medium size environments.

This best practice guide is focused on deploying and managing Epic Operational and Analytical Databases on VMware vSAN. These best practices are determined by:

For the most recent status of VMware vSAN with Epic, contact your Epic representative for the most current Storage Products and Technology Status Guide.

This document is intended for architects, application developers, and CTOs in the healthcare ecosystem who are involved in the early phases of planning, design, and deployment of Epic in their environment or upgrading their existing Epic infrastructure. It is assumed that the reader is familiar with the concepts and operations of running Epic software.

This chapter describes the software components discussed in this Best Practice Guide. Epic maintains a list of specific recommended platforms that they have focused development, functional and performance testing, and release efforts on for each version of Epic, called the Target Platform. For a more up-to-date list of recommended software components, refer to the most recent Epic Target Platform Roadmap.

VMware vSAN is the industry-leading software powering VMware’s software defined storage and HCI solution. vSAN helps customers evolve their data center without risk, control IT costs and scale to tomorrow’s business needs. vSAN, native to the market-leading hypervisor, delivers flash-optimized, secure storage for all of your critical vSphere workloads. vSAN is built on industry-standard x86 servers and components that help lower TCO in comparison to traditional storage. It delivers the agility to easily scale IT and offers the industry’s first native HCI encryption.

Epic licenses and uses InterSystems Caché and IRIS for the operational database to store and manage patient records, IRIS being the newer database. Within Caché and IRIS, data can be modeled and stored as tables, objects, or multidimensional arrays. Different models can seamlessly access data—without the need for performance—killing mapping between models. All three access methods can be simultaneously used on the same data with full concurrency. Thus, making it ideal for use in hospital environments where thousands of clinicians could access and manipulate the same data.

Epic leverages many features and functions from Caché and IRIS, however, one important note are the two main deployment architectures that Epic uses:

While most solutions focus on the software first, Epic predefines the software in this solution. Thus, the critical variable is the hardware for vSAN and so we call out the hardware resources first due to the importance of the performance criteria for Epic on vSAN.

As part of the research for this guide, we tested with the below hardware. Note that this hardware simply serves as a baseline. Refer to the Epic Hardware Guide and the vSAN HCG for the most recent hardware recommendations. Each vSAN node has the following configuration:

Although VMware vSAN supports a wide range of hardware for optimal performance with applications such as EHRs we recommend:

As shown in Figure 1, we created a VMware vSphere Distributed Switch™ for each vSAN cluster to act as a single virtual switch across all associated nodes for the cluster. The one dual 25GbE NIC on each of the nodes were configured for vSAN traffic. The NICs were trunked together as a Link Aggregation Group (LAG) for bandwidth and redundancy. 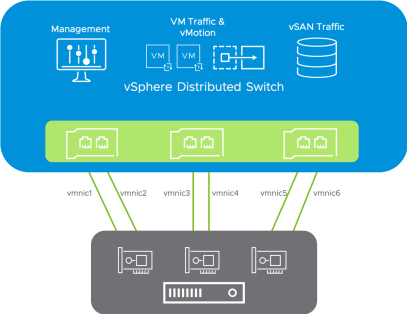 In this solution, we use a 6-node vSAN cluster with vSAN Ready Nodes to validate the Epic database workloads. We consulted with their lead architects and followed Epic best practices. Epic testing and recommendations methodology are quite strict and with the onset of Hyperconverged Infrastructure they asked VMware to test additional workloads and scenarios. 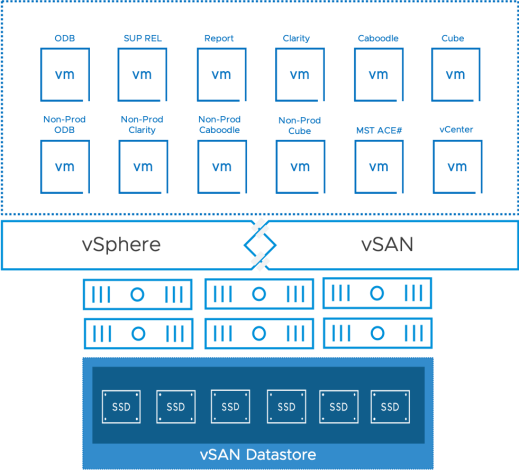 With our Database vSAN cluster, both performance and availability are the driving factors; thus, we use (6) nodes that allow us to use Failures to Tolerate of 2 (FTT=2). The architecture illustrated above will deliver the required performance for Epic ODB. We found that while using RAID1 for the ODB’s VDMK’s and running an aggressive IO test that vSAN maintains the required IO response time.  This configuration is designed for a small Epic customer. This cluster size can scale to what is required in Epic’s Hardware configuration guide.

In our design, we use different storage policies for the Epic workloads. Table 3 shows the detailed configuration. 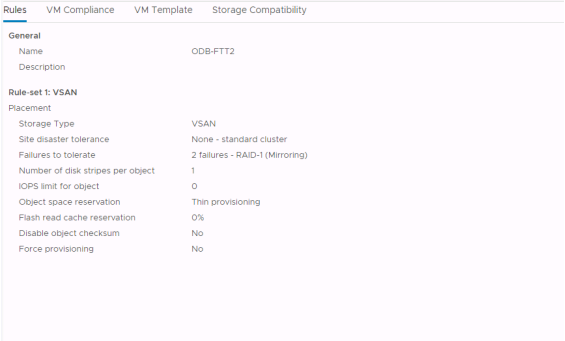 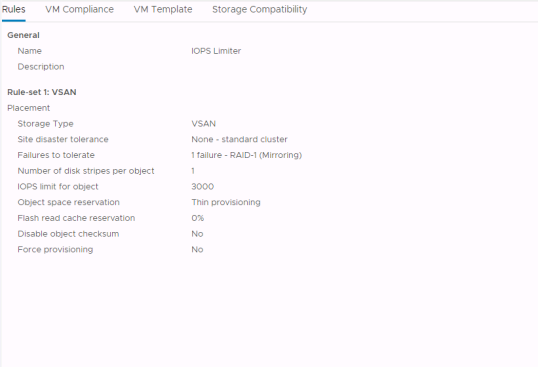 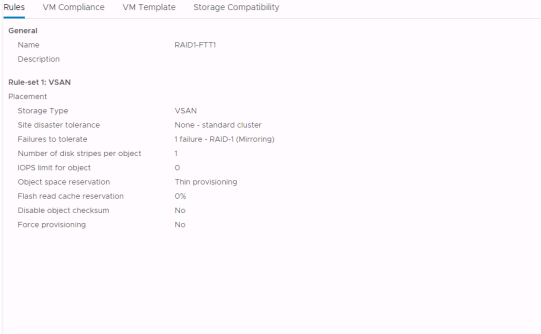 During our test cycles we concluded, with Epic’s guidance, the use of the IOPS Limiter Storage Policy would be beneficial to prevent any performance impact to the ODB environment in the event of an unplanned IO change. As noted in Table 3 we recommend the IOPS Limiter with 3,000 IOPS per VMDK with FTT=1 to be the vSAN Default Storage Policy. We also recommend using FTT=2 for both PROD ODB and NON-PROD ODB. This gives the ODB environment the ability to handle two failures within the vSAN cluster prior to the ODB failing over to the DR site. Lastly, we recommend using RAID1 for all VMs and VMDKs in the Database cluster. RAID1 will deliver the performance that the Operational and Analytical databases require.

With mission critical workloads such as an EHR, we recommend using the default setting of Checksum. vSAN uses end-to-end checksum to ensure the integrity of data by confirming that each copy of a file is exactly the same as the source file. The system checks the validity of the data during read/write operations, and if an error is detected, vSAN repairs the data or reports the error. If a checksum mismatch is detected, vSAN automatically repairs the data by overwriting the incorrect data with the correct data. Also, we recommend disabling Dedupe and Compression as it may impact application response time.

Below is our Prod-ODB VM layout as an example. 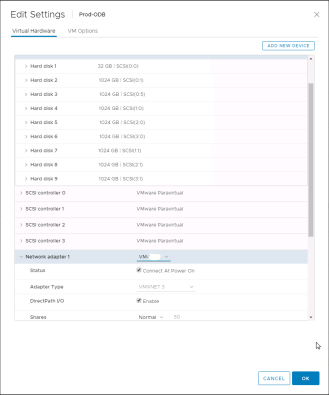 VMware vSAN proves to be on-par with traditional storage for mission-critical workloads such as Epic EHR. However, performance is only one factor for such a demanding and dynamic ecosystem; vSAN also delivers both cost-effectiveness and agility. vSAN powered HCI organically changes the EHR ecosystem and exposes the business application owners to architectural efficiency and simplicity by empowering them with deployment choices without sacrificing performance.

By adopting vSAN infrastructure and application, owners can more readily collaborate and architect for the business problems of today and tomorrow.

Christian Rauber, a staff solutions architect in the Hyperconverged Infrastructure, Product Enablement team wrote the original version of this paper.