The vSphere Clustering Service (vCLS) is a new capability that is introduced in the vSphere 7 Update 1 release. It’s first release provides the foundation to work towards creating a decoupled and distributed control plane for clustering services in vSphere.

The basic architecture for the vCLS control plane consists of maximum 3 virtual machines (VM), also referred to as system or agent VMs which are placed on separate hosts in a cluster. These are lightweight agent VMs that form a cluster quorum. On smaller clusters with less than 3 hosts, the number of agent VMs is equal to the numbers of ESXi hosts. The agent VMs are managed by vSphere Cluster Services. Users are not expected to maintain the lifecycle or state for the agent VMs, they should not be treated like the typical workload VMs. 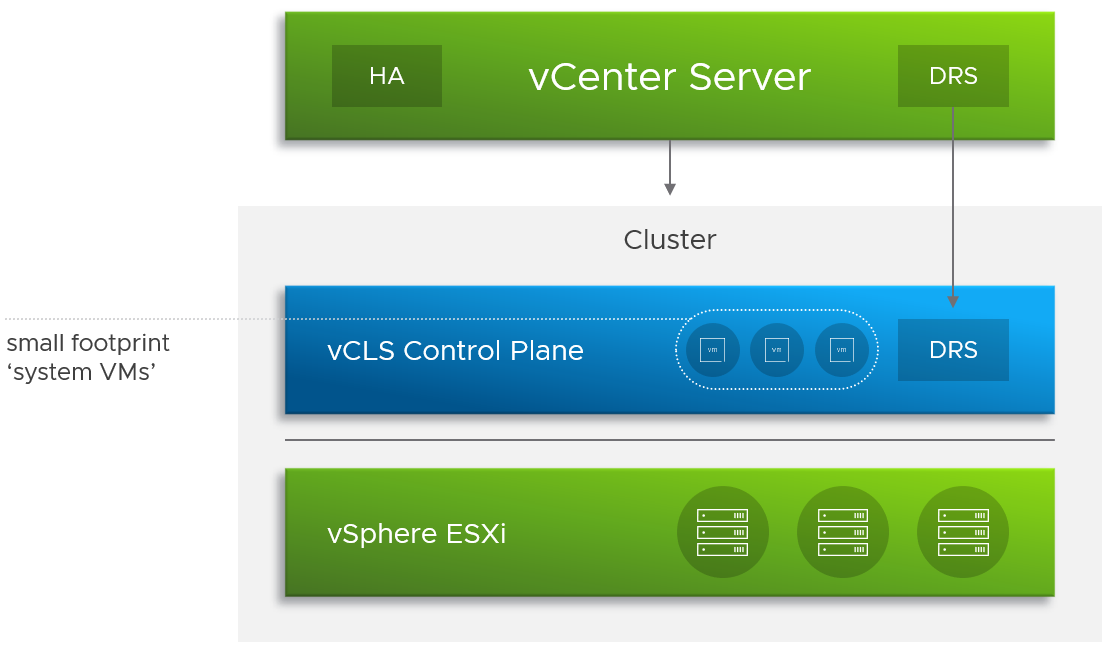 The agent VMs that form the cluster quorum state, are self correcting. This means that when the agent VMs are not available, vCLS will try to instantiate or power-on the VMs automatically.

There are 3 health states for the cluster services:

The vCLS agent VMs are lightweight, meaning that resource consumption is kept to a minimum. vCLS automatically creates a max of 3 agent VMs per cluster in an existing deployment when vCenter Server is upgraded to vSphere 7 update 1. In a greenfield scenario, they are created when ESXi hosts are added to a new cluster. If no shared storage is available, the agent VMs are placed on local storage. If a cluster is formed before shared storage is configured on the ESXi hosts, as would be the case when using vSAN, it is strongly recommended to move the vCLS agent VMs to shared storage after.

The agent VMs run a customized Photon OS. The resource specification per agent VM is listed in the following table:

The 2 GB virtual disk is thin provisioned. Also, there’s no networking involved, so there’s no network adapter configured. The agent VMs are not shown in the Hosts and Clusters overview in the vSphere Client. The VMs and Templates view now contains a new folder, vCLS, that contains all vCLS agent VMs. With multiple clusters, all vCLS agent VMs will show, numbered consecutively.

The vSphere Client contains messages and notes to show information about the vCLS agent VMs, also stating that the power state and resources of these VMs is handled by the vCLS.

As stated before, the agent VMs are maintained by vCLS. There’s no need for VI admins to power-off the VMs. In fact, the vSphere Client shows a warning when a agent VM is powered-off. 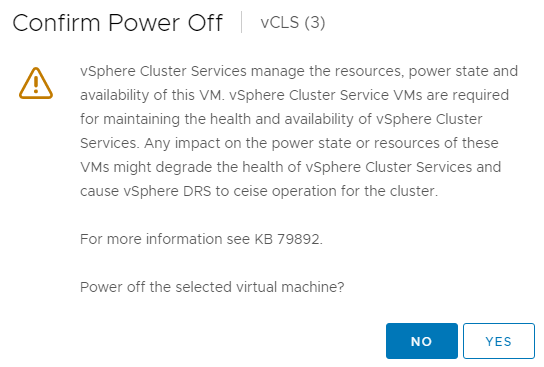 When a host is placed into maintenance mode, the vCLS agent VMs are migrated to other hosts within the cluster like regular VMs. Customers should refrain from removing, or renaming the agent VMs or its folder in order to keep the cluster services healthy.

The lifecycle for vCLS agent VMs is maintained by the vSphere ESX Agent Manager (EAM). The Agent Manager creates the VMs automatically, or re-creates/powers-on the VMs when users try to power-off or delete the VMs. Is the example below, you’ll see a power-off and a delete operation. Both from which the EAM recovers the agent VM automatically.

Every agent VM has additional properties so they can be ignored with specific automated tasks. These properties can also be found using the Managed Object Browser (MOB). The specific properties include:

vCLS Agent VMs have an additional data property key “HDCS.agent” set to “true”. This property is automatically pushed down to the ESXi host along with the other VM ExtraConfig properties explicitly set by EAM.