Note: This is a co-branding solution paper between VMware and NVIDIA.

This solution is intended for IT admins, storage, networking, and infrastructure experts who are involved in planning, architecting, and administering a virtualized NVIDIA Omniverse Enterprise environment on VMware Cloud Foundation with Horizon 8.

VMware vSphere is VMware's virtualization platform, which transforms data centers into aggregated computing infrastructures that include CPU, storage, and networking resources. vSphere manages these infrastructures as a unified operating environment and provides operators with the tools to administer the data centers that participate in that environment. The two core components of vSphere are ESXi™ and vCenter Server®. ESXi is the hypervisor platform used to create and run virtualized workloads. vCenter Server is the management plane for the hosts and workloads running on the ESXi hosts.

VMware vSAN is the industry-leading software powering VMware’s software-defined storage and HCI solution. vSAN helps customers evolve their data center without risk, control IT costs, and scale to tomorrow’s business needs. vSAN, native to the market-leading hypervisor, delivers flash-optimized, secure storage for all of your critical vSphere workloads, and is built on industry-standard x86 servers and components that help lower TCO in comparison to traditional storage. It delivers the agility to scale IT easily and offers the industry’s first native HCI encryption.

VMware NSX Data Center is the network virtualization and security platform that enables the virtual cloud network, a software-defined approach to networking that extends across data centers, clouds, and application frameworks. With NSX Data Center, networking and security are brought closer to the application wherever it’s running, from virtual machines to containers to bare metal. Like the operational model of VMs, networks can be provisioned and managed independent of the underlying hardware. NSX Data Center reproduces the entire network model in software, enabling any network topology—from simple to complex multitier networks—to be created and provisioned in seconds. Users can create multiple virtual networks with diverse requirements, leveraging a combination of the services offered via NSX or from a broad ecosystem of third-party integrations ranging from next-generation firewalls to performance management solutions to build inherently more agile and secure environments. These services can then be extended to a variety of endpoints within and across clouds.

VMware Horizon is a modern platform for secure delivery of virtual desktops and apps across the hybrid cloud, from the market leader in software-defined data center and digital workspaces. By leveraging the unique integration with the trusted VMware technology, Horizon helps IT efficiently deploy and scale virtual desktops and apps from a single control plane with rapid provisioning, automation, and simplified management to extend the best digital workspace experience to end users. Horizon on vSphere is available anywhere that VMware vSphere is providing the infrastructure, such as on-premises data centers, VMware Cloud on Amazon Web Services, Azure VMware Solution, or Google Cloud VMware Engine. 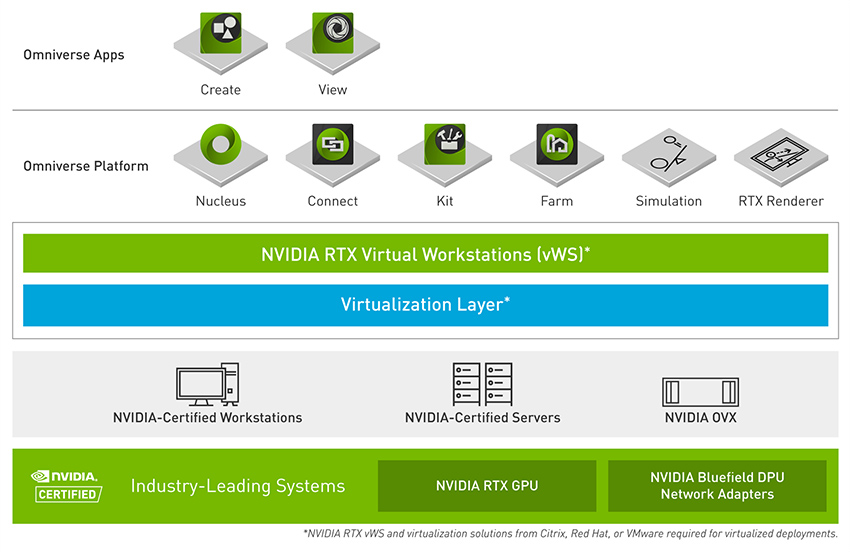 Omniverse Nucleus is the database and collaboration engine of Omniverse. With Omniverse Nucleus, teams can have multiple users connected live with multiple applications all at once. This allows people to use the application they are the most comfortable and quickest with and really opens a lot of doors for rapid iteration. To do so, Omniverse Nucleus offers a set of fundamental services that allow a variety of client applications, renderers, and microservices all to share and modify representations of virtual worlds together.

Nucleus operates under a publish/subscribe model. Subject to access controls, Omniverse clients can publish modifications to digital assets and virtual worlds to the Nucleus database or subscribe to their changes.

Given the fact that most data in Nucleus is large, and does not change - things like textures, large meshes are much less likely to change than small files containing modifications users are making to them, Nucleus Caches can speed up the loading of that data for Clients. Nucleus Cache servers work as HTTP Proxy caches. They can be chained and placed in key points of the infrastructure to achieve optimal performance for the clients. In addition, Nucleus Caches support cache pre-warming, cache cleanup, and cache rotation.

In VMware Cloud Foundation, a workload domain is a policy-based resource construct with specific availability and performance attributes. It combines compute (vSphere), storage (vSAN), networking (NSX), and other components into a single consumable entity. Omniverse Enterprise is deployed in the workload domain which has the hardware that meets the requirements (such as specific types of GPUs) for Omniverse Enterprise. The management domain of VMware Cloud Foundation is shared across all workload domains.

A typical VMware Cloud Foundation deployment model includes NSX-T edges that are used for network services that cannot run on the distributed routers. These services include north/south routing, load balancing, DHCP, VPN, and NAT. NSX-T edges are optional depending on the network architecture requirements for Omniverse Enterprise. 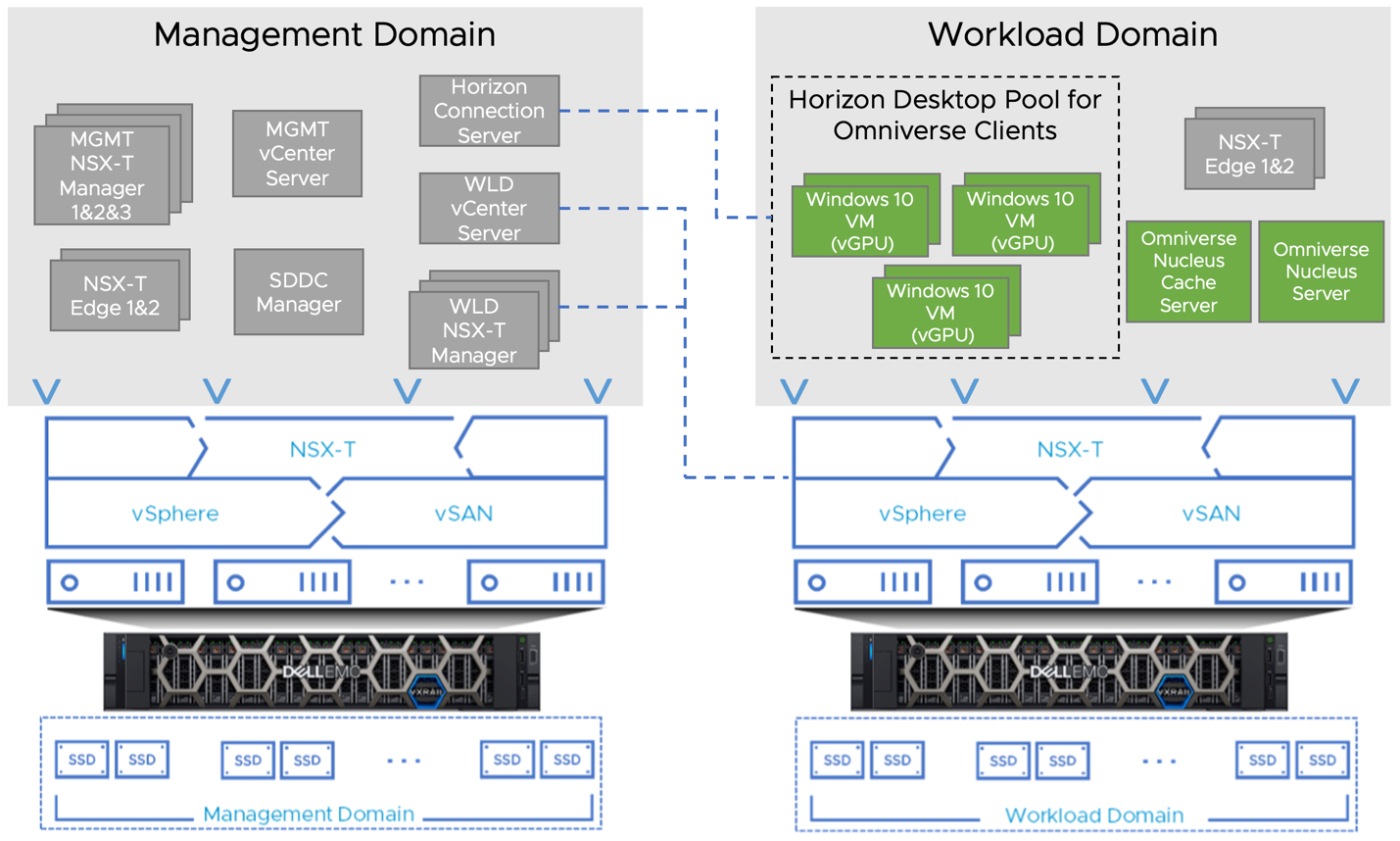 Table 1 shows the hardware specification of each ESXi host in the workload domain cluster.

vSAN was configured per the following configurations:

On each ESXi host, enable the following settings: 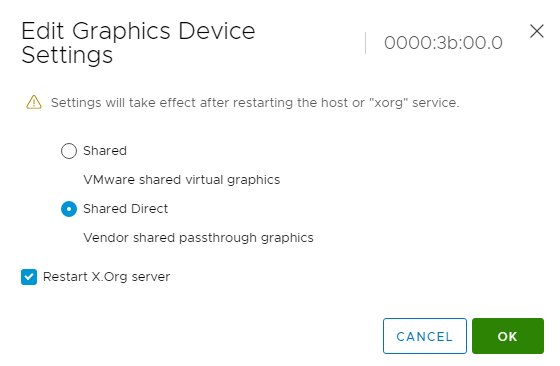 Follow the steps below to set up Logical Volume Manager (LVM) for Linux when installing Ubuntu OS: 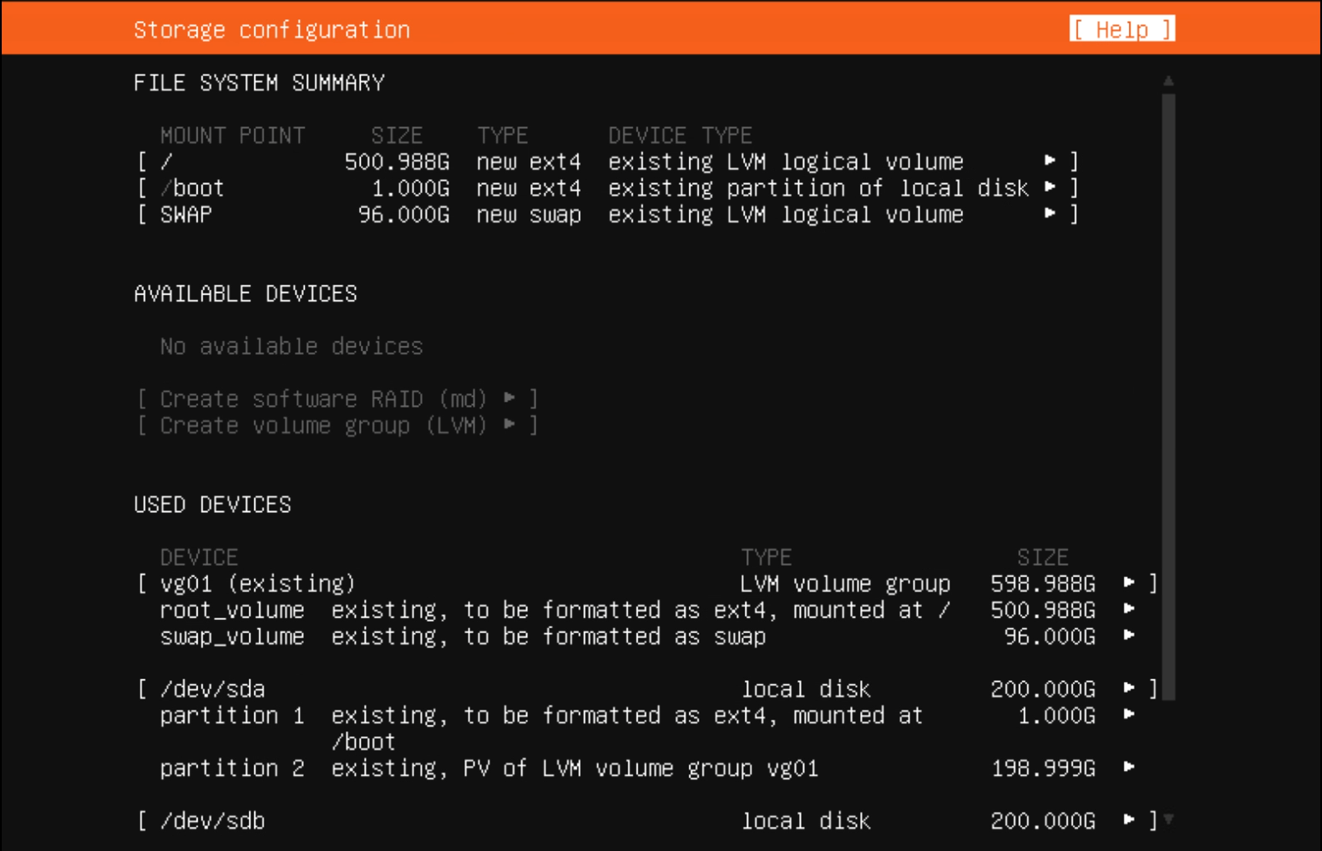 Docker and Docker Compose are required on Ubuntu to bring up an Omniverse Nucleus Server or a Cache Server. They can be installed by following the official instructions here.

For more details about Omniverse Nucleus Server planning and preparation, refer to the NVIDIA guidance.

Using a network that supports DHCP will simplify the deployment of virtual desktops through Horizon 8.

A PCI Device that is associated with the NVIDIA vGPU profile is required to run Omniverse Enterprise clients. In our case, nvidia_a40-48q was used to allocate one full physical GPU to one VM. Use smaller vGPU profiles such as nvidia_a40_4q, nvidia_a40_8q, or nvidia_a40-16q if the GPU are shared by multiple users.

Follow the instruction here to download the token bin file with the feature NVIDIA RTX Virtual Workstation from NVIDIA CLS or DLS license server. And put it under:

Open registry editor on Windows and add the following key:

Once we have the Windows 10 golden image prepared, we can add the vCenter to our existing Horizon environment and create a desktop pool.

Configure proper desktop pool sizing depending on the vGPU profile assigned to the golden image. Refer to the Virtual GPU Software User Guide for more details. 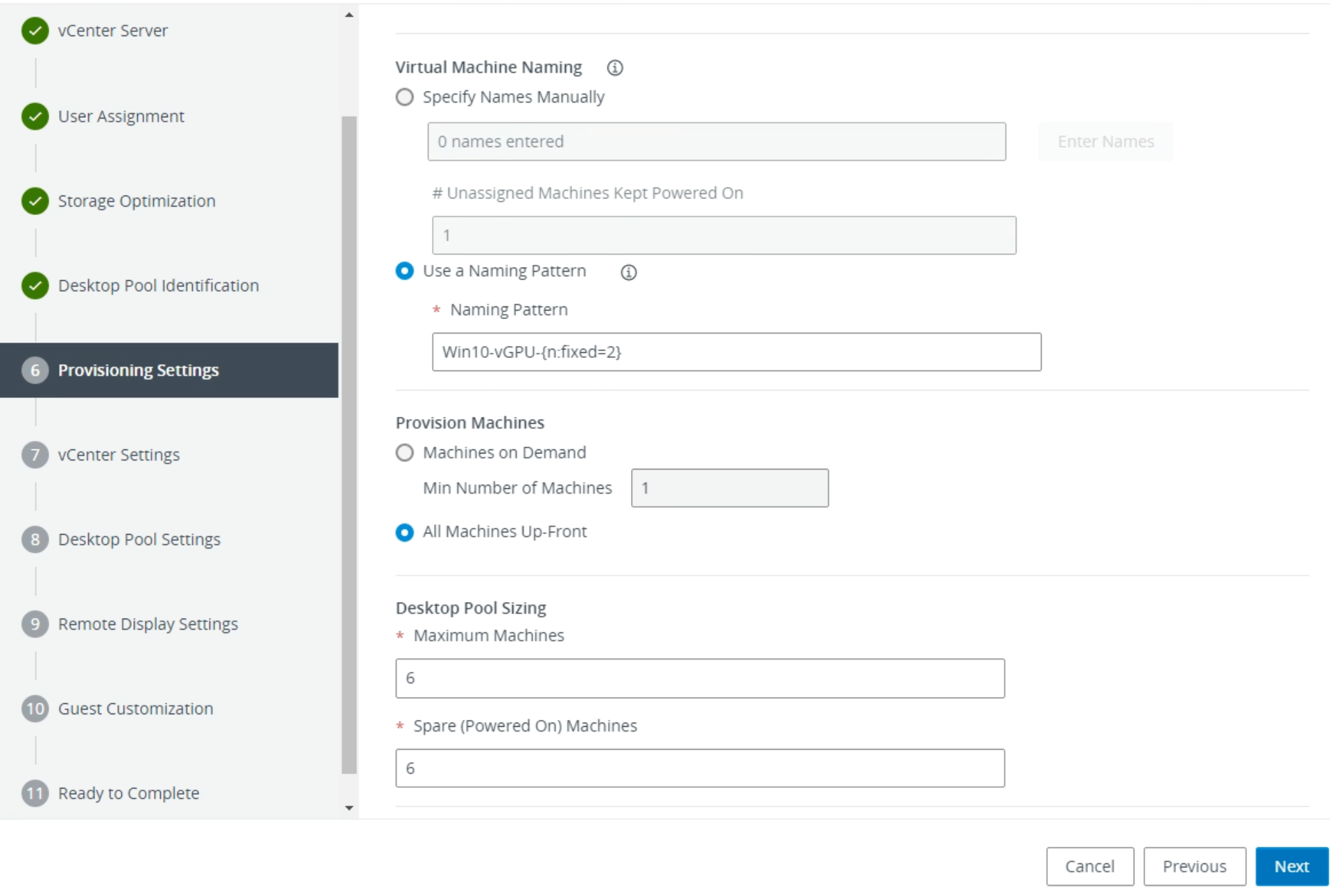 Select VMware Blast as the default display protocol when configuring the desktop pool in Horizon. 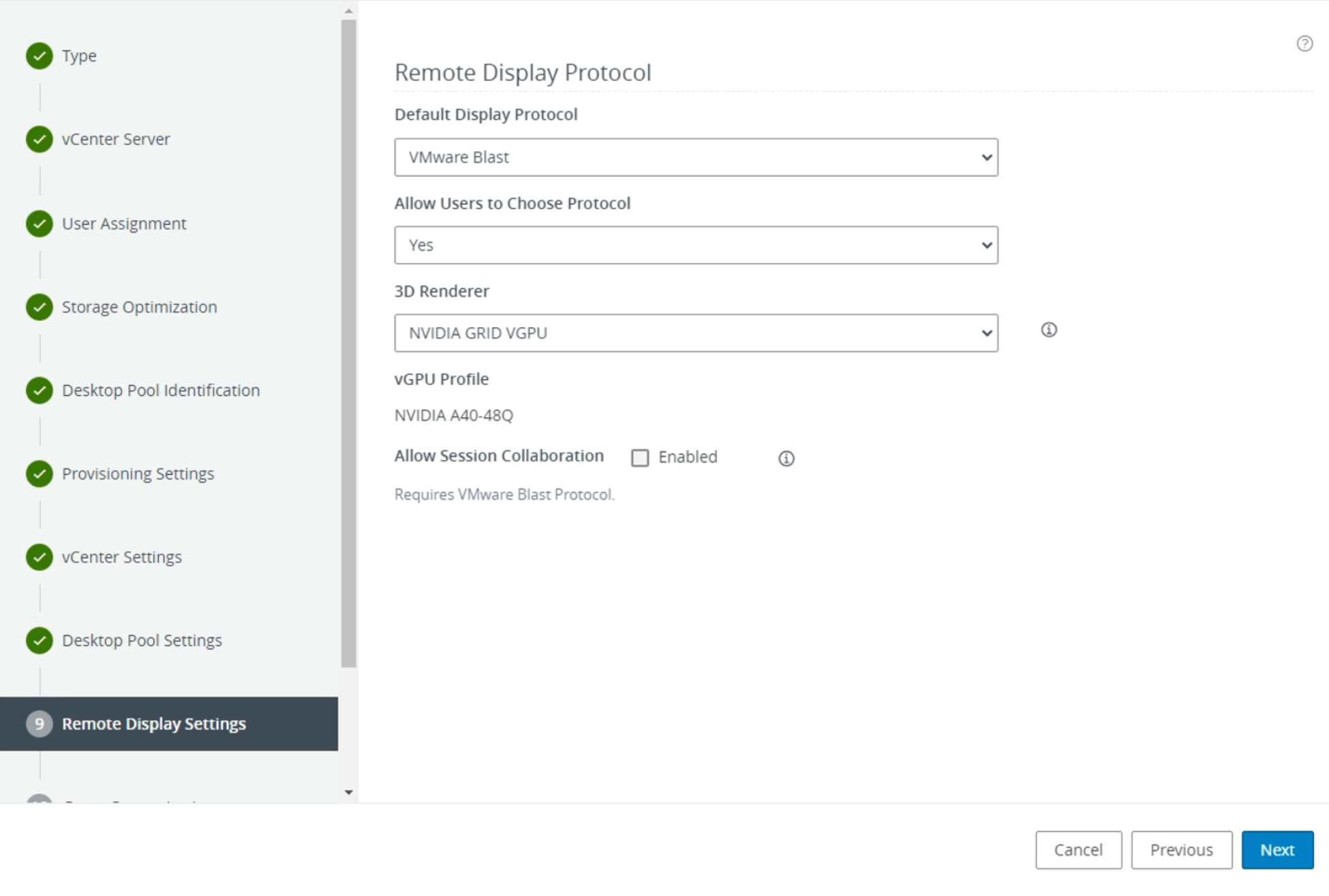 The goal of this section is to verify the deployment, functionalities, and performance of NVIDIA Omniverse Enterprise on VMware Cloud Foundation with Horizon 8.

The validation covers the following scenarios:

Check the status of the containers, please run: sudo docker ps -a

In addition, to test if the Omniverse Enterprise Nucleus Server works properly, we can open a browser and visit the hostname/ip address we defined in the nucleus-stack.env file. Use the username and the password configured in the env file to log in and you will see the contents on the server:

Clone the Ubuntu template to a new virtual machine. And set up the Omniverse Enterprise Cache Server by following this guide from NVIDIA.

Check the status of the containers, please run: sudo docker ps -a 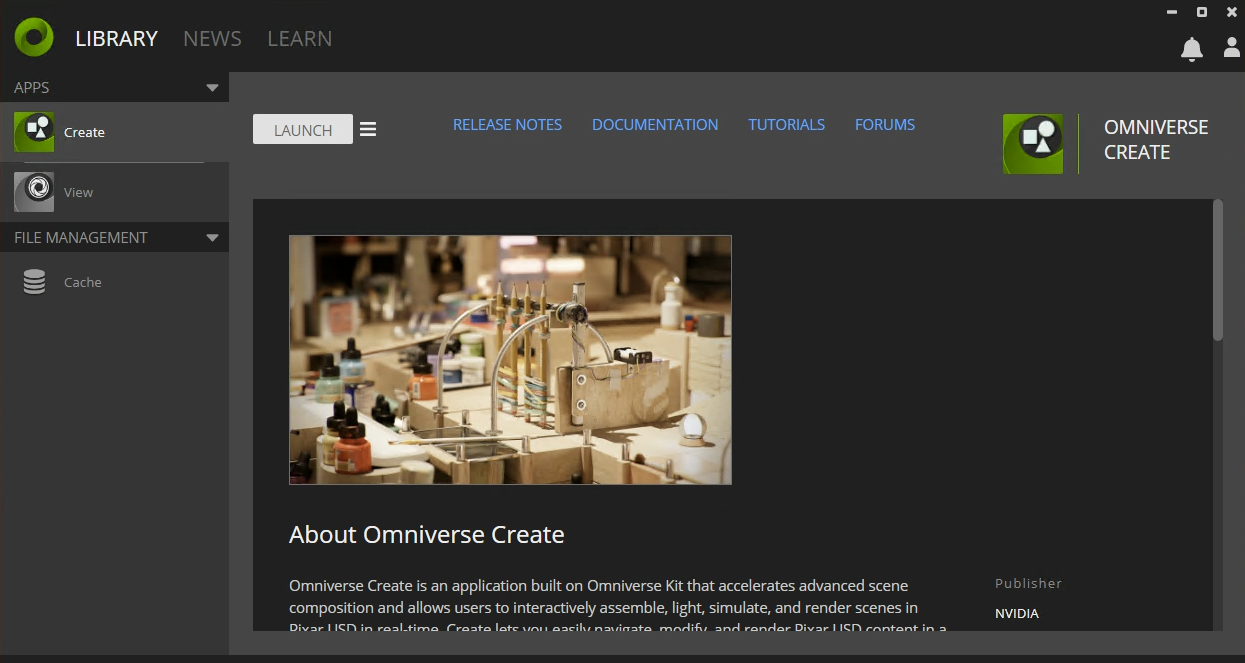 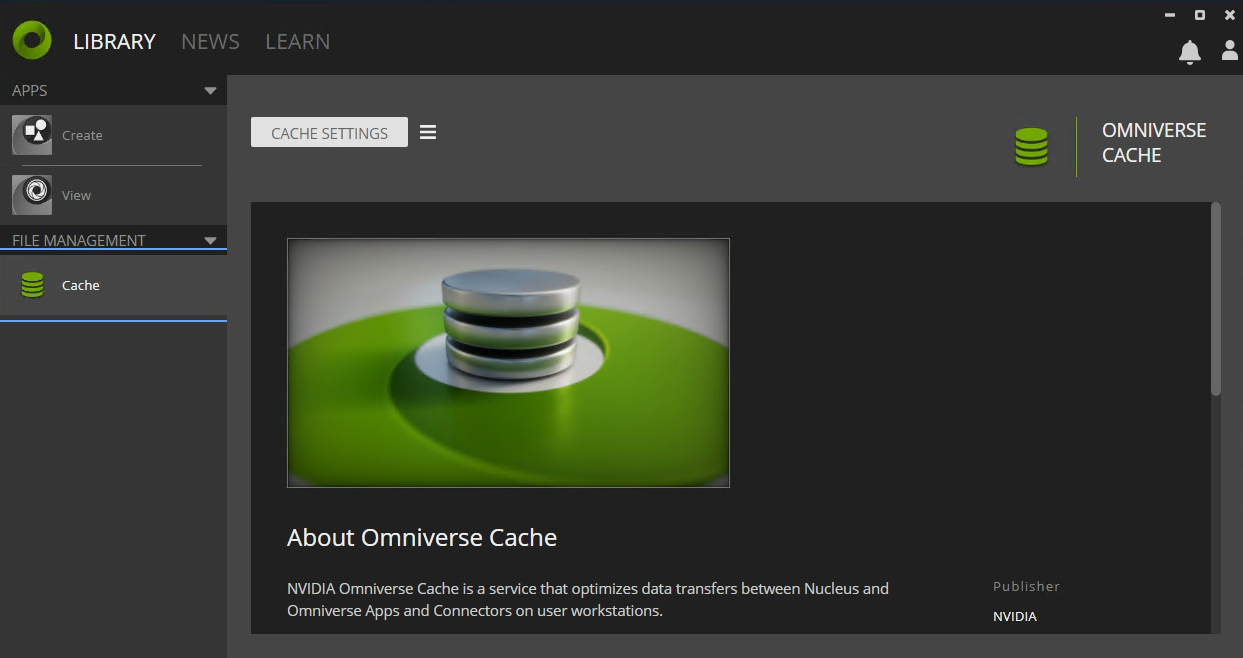 A web page will open from the browser to configure the Cache settings: 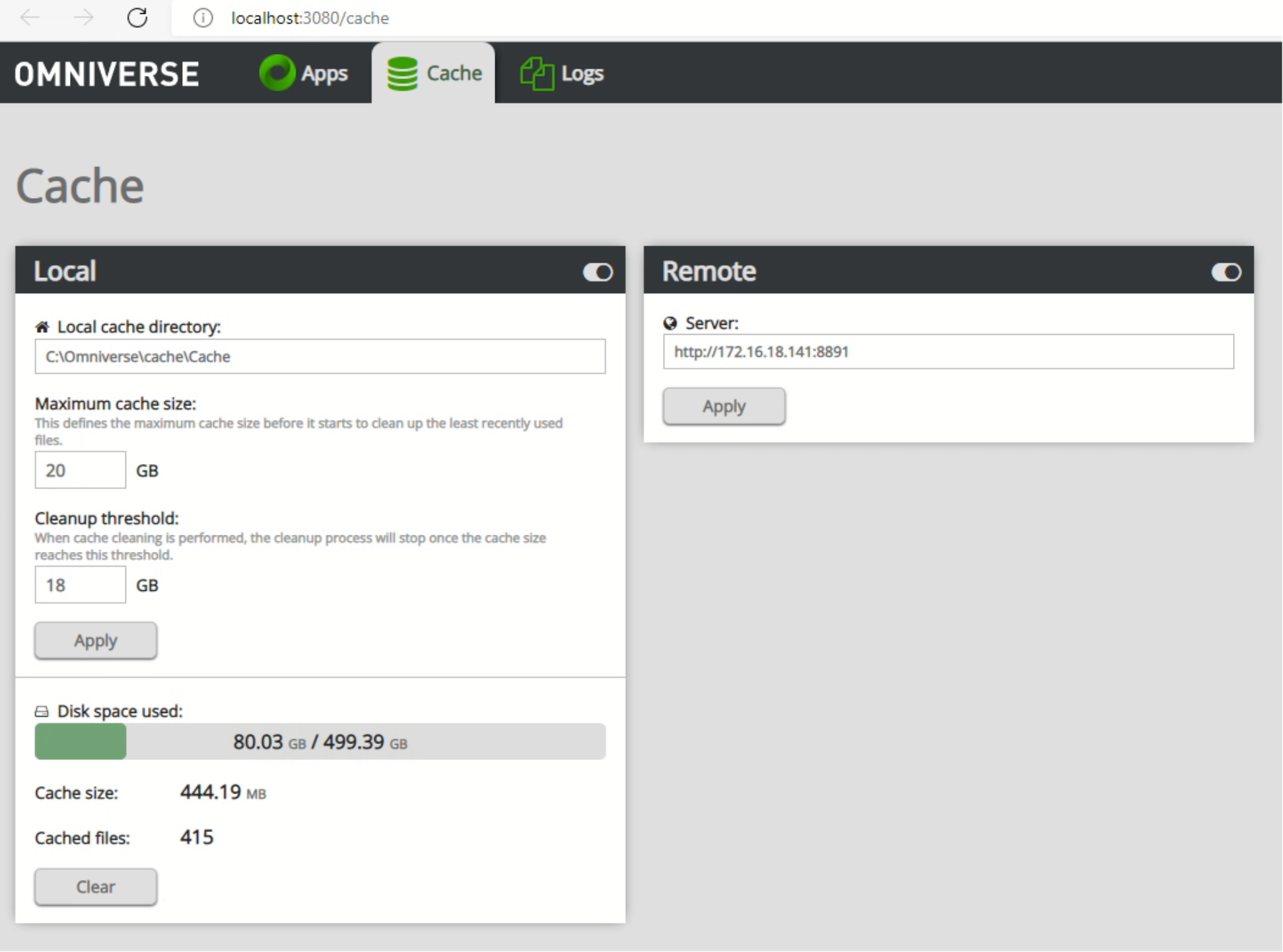 For the local cache, cache location, cache size, and cleanup threshold can be configured. Toggle on the “Remote” switch on the right to configure a remote cache server.

Here we use the Omniverse Create application to open a demo project (Marbles) provided by NVIDIA on the Omniverse Nucleus Server.

After the connection is added, go to NVIDIA/Samples/Marbles/ and open the Marbles_Assets.usd file to load the project:

nVectorLite from NVIDIA was used to test the user experience. This tool measures the true end-user latency of a VDI session by hooking into the graphics driver on the user’s endpoint. End user Latency is measured along the whole graphics pipeline from the VDI to the remote screen to provide accurate data. It also measures the frame rate being displayed on the endpoint. Furthermore, nVectorLite measures the image quality displayed to the user by comparing the remoting solution to the original image rendered on the Target VM.

Three VMs are required for nVectorLite to conduct the performance tests: 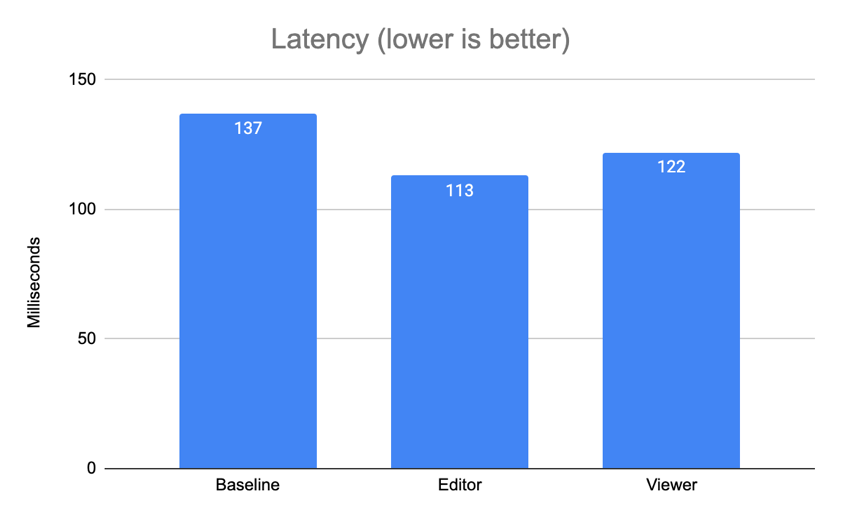 The latency metric defines how responsive a remote desktop is. A lower value means more responsive. As it is shown in Figure 21, editors and viewers of Omniverse Enterprise workloads experienced lower latency than the baseline. 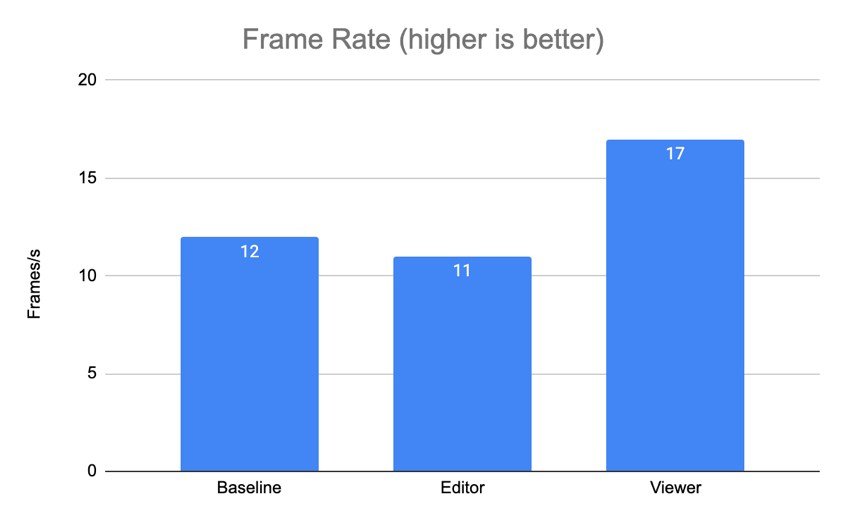 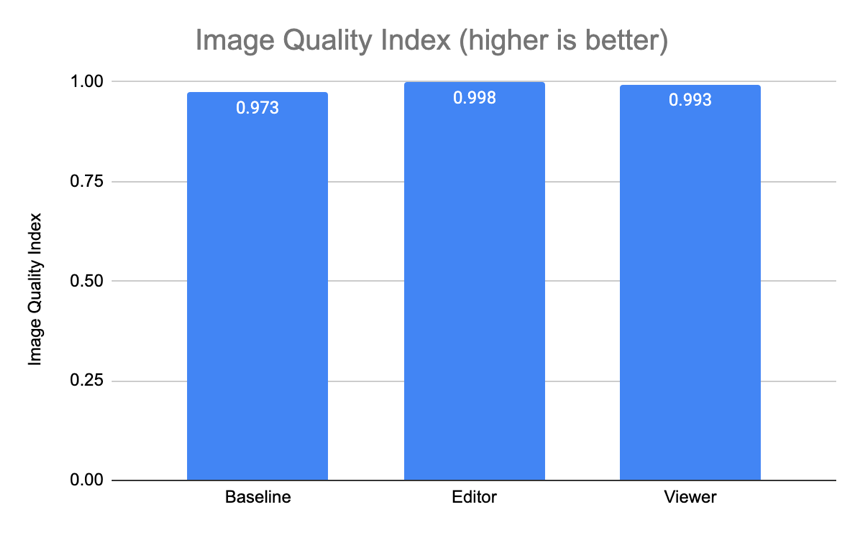 The image quality metric defines the impact of remoting on image quality. A higher value means better image qualities. As it is shown in Figure 23, Omniverse Enterprise editors and viewers were a little better than the baseline.

Storage Policy Based Management (SPBM) allows you to align storage with the application demands of the virtual machines. The Number of Failures to Tolerate capability addresses the key customer and design requirement of availability. With FTT, availability is provided by maintaining replica copies of data, to mitigate the risk of a host failure resulting in lost connectivity to data or potential data loss.

Recommendation: Enable Encryption as required per your InfoSec. 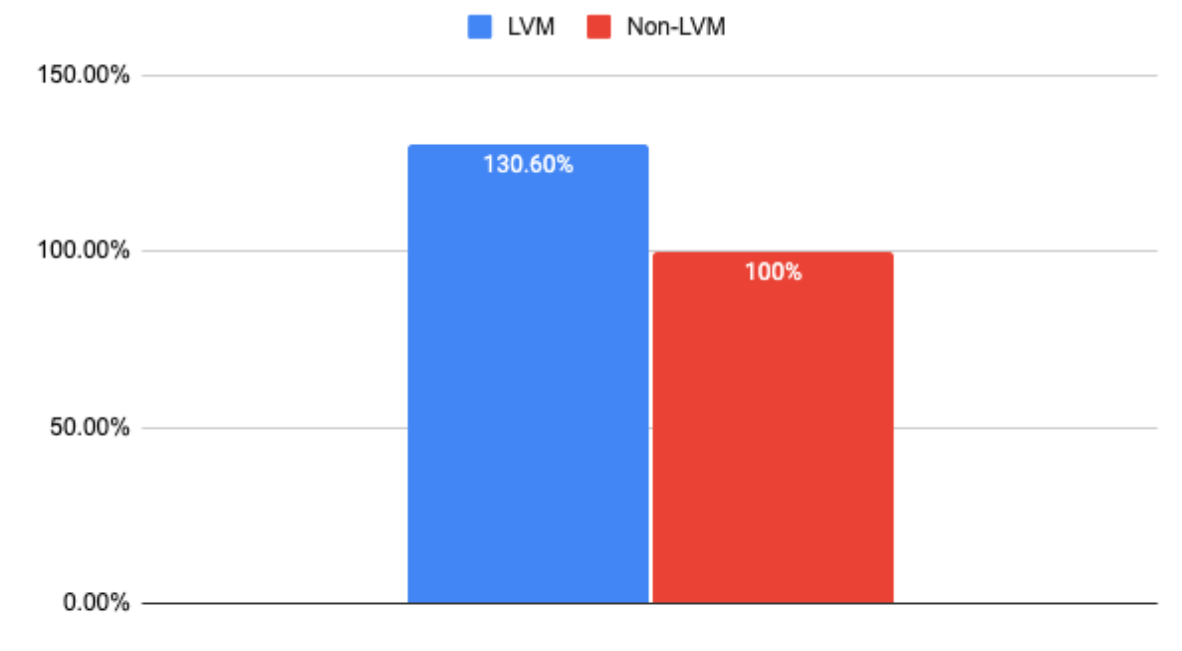 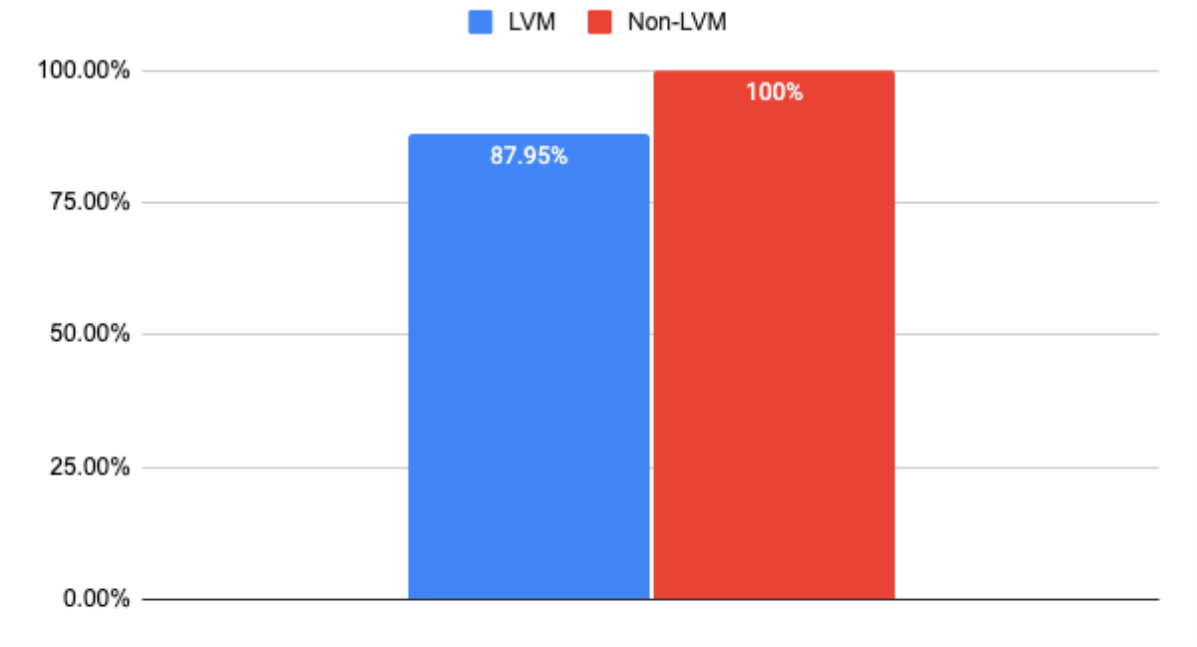 As Figure 24 and Figure 25 demonstrated, for the same Omniverse Enterprise I/O workload (simulated with FIO), Omniverse Nucleus with LVM configured has 30.6% higher bandwidth and 12.05% lower latency when compared to the non-LVM case as the baseline.

Recommendation: Use the VMware Paravirtual SCSI controller and LVM for Omniverse Nucleus VM.

Display communication protocols provide end users with a graphical interface to a remote desktop or published application. Display protocols must be able to efficiently provide the best user experience for various types of screen content, including text, still images, streaming video, 3D rendering, and audio. Blast Extreme is a display protocol built by VMware to deliver an immersive, feature-rich experience for end users across devices, locations, media, and network connections.

Recommendation: Use VMware Blast Extreme as the display protocol.

Most data in Nucleus is large, and does not change. Therefore, caches can speed up loading of the data for Clients. Ensure every workstation connecting to any Nucleus has Cache installed and enabled. Adding caches strategically and daisy chaining caches on workstations to those upstream caches will increase performance. Refer to Designing your Caching Infrastructure for more details.

VMware Cloud Foundation combines highly secure software-defined compute, storage, and network. With VMware Cloud Foundation, we can easily manage the lifecycle of the hybrid cloud environment. IT administrators can set up the Omniverse Enterprise environment confidently on a consistent infrastructure with much lower cost and simplified management. VMware Horizon 8 makes the delivery of Omniverse Enterprise client virtual desktops easier than ever. With NVIDIA GRID vGPU technology, VMware Horizon can deliver an enhanced user experience with Blast Performance.

The following reviewers also contributed to the paper contents: