VMware Tanzu RabbitMQ for Kubernetes 1.3 contains RabbitMQ 3.10 that was released in May 2022, with many new features and improvements. Additionally, this commercial offering includes all the required dependencies for RabbitMQ as well as some commercial plugins making it easier to deploy this cloud native solution.

Apache Kafka is an open-source distributed event streaming platform for high-performance data pipelines and streaming analytics. It is used as a popular message queue for distributed systems and is commonly used to stream data in the IoT use cases.

You must first set up a reference architecture environment for Tanzu Kubernetes Grid. And then, the material takes you through the steps to install VMware Tanzu RabbitMQ for Kubernetes.

The technology components in this solution are:

VMware Tanzu Kubernetes Grid provides the services such as networking, authentication, ingress control, and logging that a production Kubernetes environment requires. It can simplify operations of large-scale, multi-cluster Kubernetes environments and keep your workloads properly isolated. Also, it automates lifecycle management to reduce your risk and shift your focus to more strategic work.

VMware Tanzu RabbitMQ for Kubernetes provides the building blocks for a cloud native messaging and streaming service that you can deploy on any Kubernetes cluster.

Streams are a new feature in RabbitMQ for both the open source RabbitMQ and commercial Tanzu RabbitMQ editions. It delivers some of the benefits of log structures, like fast data transfer and the ability to replay and reprocess messages, combined with the best Tanzu RabbitMQ features like flexible routing and command and response, all with a high degree of data safety. Streams support existing protocols as well as a specific new binary protocol for improved speed and throughput.

Streams can be deployed alongside conventional messaging and queues to create a hybrid message topology making it easier for users to migrate from one technology to another.

A cluster of Kafka brokers handles delivery of messages.

Strimzi provides a way to run an Apache Kafka cluster on Kubernetes in various deployment configurations. For development, it is easy to set up a cluster in a few minutes. For production, you can tailor the cluster to your needs, using features such as rack awareness to spread brokers across availability zones, and Kubernetes taints and tolerations to run Kafka on dedicated nodes. You can expose Kafka outside Kubernetes using NodePort, Load balancer, Ingress and OpenShift Routes, depending on your needs, and these are easily secured using TLS. The Operators provided with Strimzi are purpose-built with specialist operational knowledge to effectively manage Kafka. 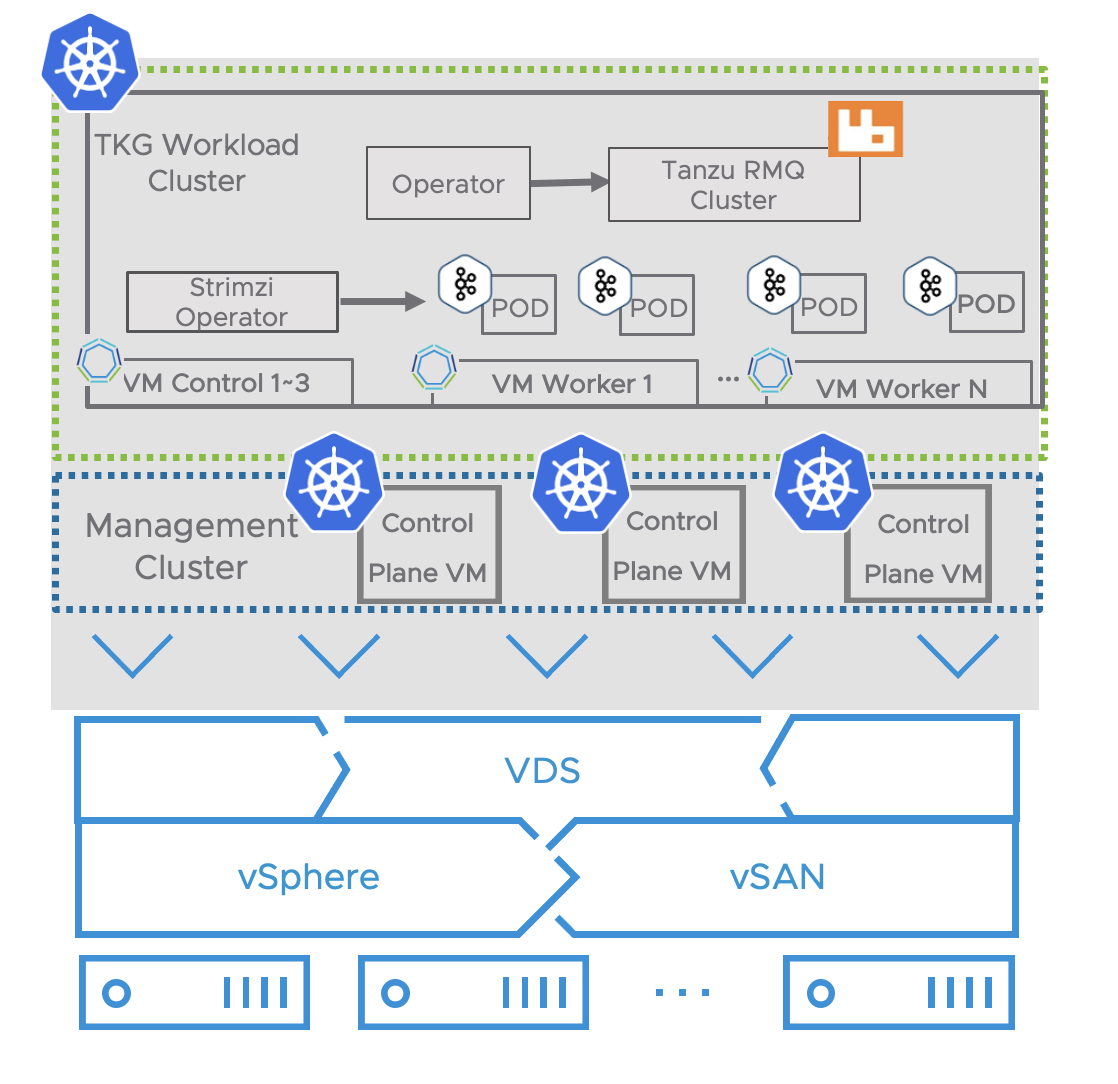 We choose Strimzi operator to run an Apache Kafka cluster on Tanzu Kubernetes Grid in customized deployment configurations. Strimzi provides a Helm chart to deploy the Cluster Operator. Apache Kafka components are provided for deployment to Kubernetes with the Strimzi distribution. The Cluster Operator watches for updates in the namespaces where the Kafka resources are deployed. Then we deployed a Kafka cluster via the configuration files. Strimzi also installs a ZooKeeper cluster and adds the necessary configuration to connect Kafka with ZooKeeper.

Refer to the next two chapters for solution validation performance.

VMware Tanzu RabbitMQ for Kubernetes 1.3 includes RabbitMQ 3.10 with many new features and improvements on Quorum Queue.

We used RabbitMQ PerfTest to generate loads for the RabbitMQ cluster to compare quorum queues with the previous version. In the performance testing, we provisioned a cluster of three Tanzu RabbitMQ pods, each with 8 vCPUs, 16GB of RAM, and 2000GB storage.

Scenario 1: We used just 1 quorum queue with fast publisher and consumer. Compare with the previous version, VMware Tanzu RabbitMQ 1.3 improved 30% throughput. And we tested with message size of 10, 100, 1000, and 5000 bytes.

We ran the test with different message sizes:

During the process of publishing and consuming, Quorum queue used ~3GB memory. But when we published 50 million messages, the cluster hit a memory alarm and stopped due to waiting for publisher confirmation for too long.

Scenario 3: We tested VMware Tanzu RabbitMQ streams with different number of streams. It did not improve much than the previous version. The detailed published and consumer results were shown below: 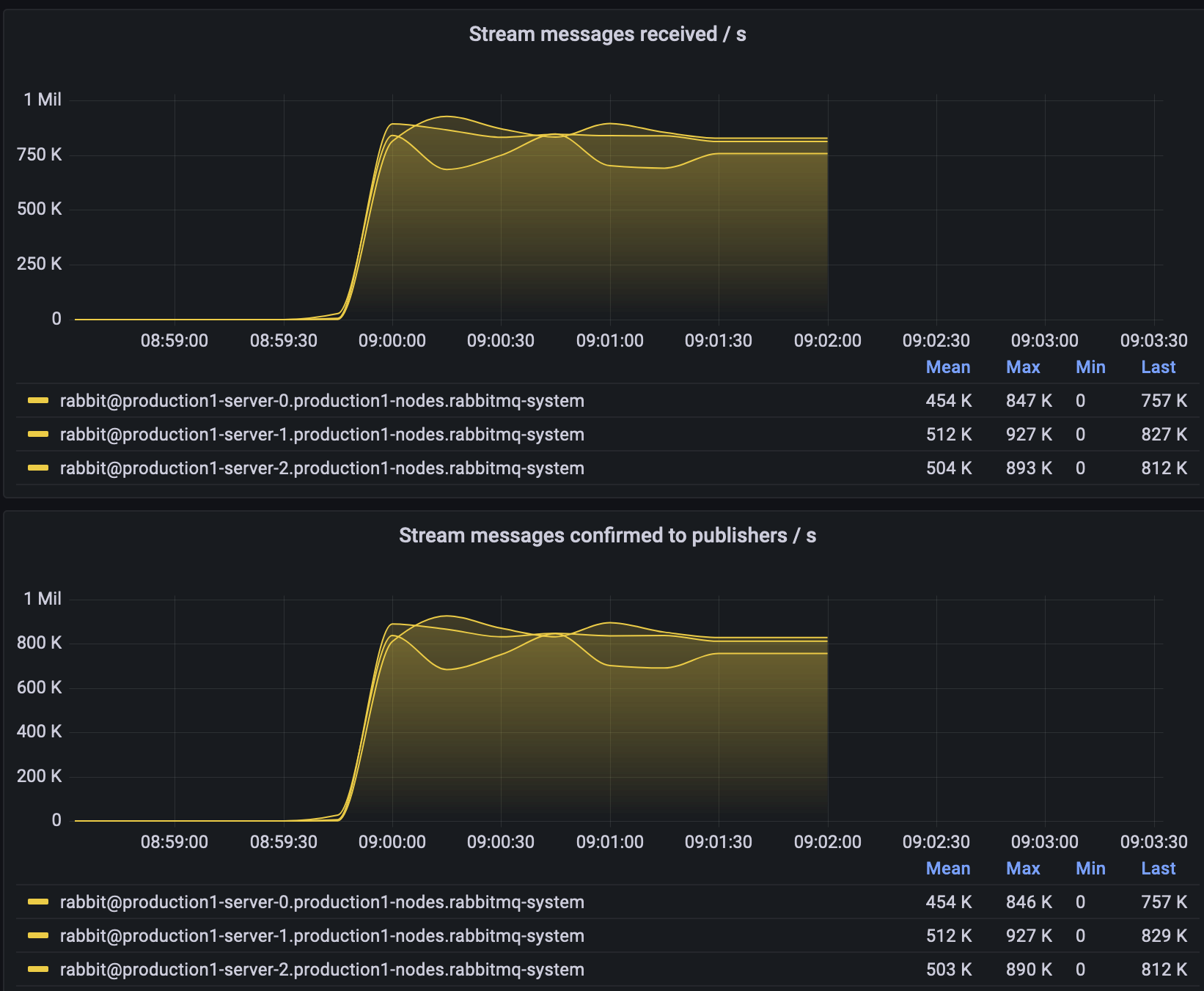 Apache Kafka is a community distributed event streaming platform capable of handling trillions of events a day. Initially conceived as a messaging queue, Kafka is based on an abstraction of a distributed commit log. Strimzi provides a way to run an Apache Kafka cluster on Kubernetes in various deployment configurations.

In the solution testing, we allocated 3 broker pods with 8 vCPU and 32 GB RAM in container resource spec.  We created the topic with 12 partitions and replication factor of 1 or 3.

Scenario 1: We created a job with the configuration to achieve the maximum throughput. For single Producer throughput with no replication and 3 replicas, each broker runs the following producer-perf test command below:

Then we created a topic with 3x replication and got the replica async. It achieved the total peak throughput at 118MB/s.

Next, we created a topic with 3x replication and got the replica sync. It means all the replicas have been persisted before acknowledging the producer. We can see a little bit more than 3x performance reduction. That is related to the overhead of sending and receiving acknowledgements by the brokers.

We can see the throughput was bigger than the producer with no replica. 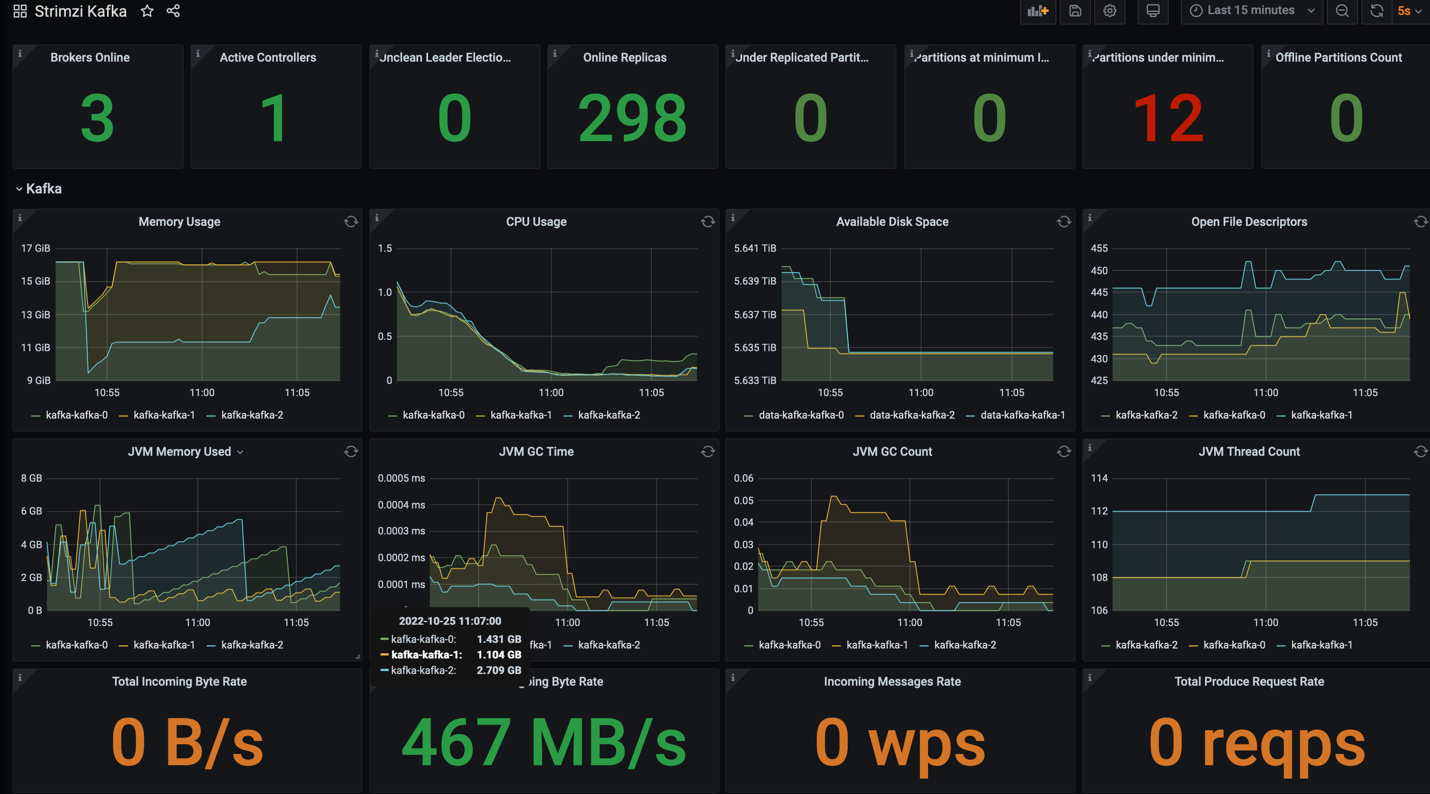 Apache Kafka is a stream processing and event-driven architecture, end-to-end latency measures the time a message traverses the pipeline from the producer through the system to the consumer. To test end-to-end latency, run the below command: 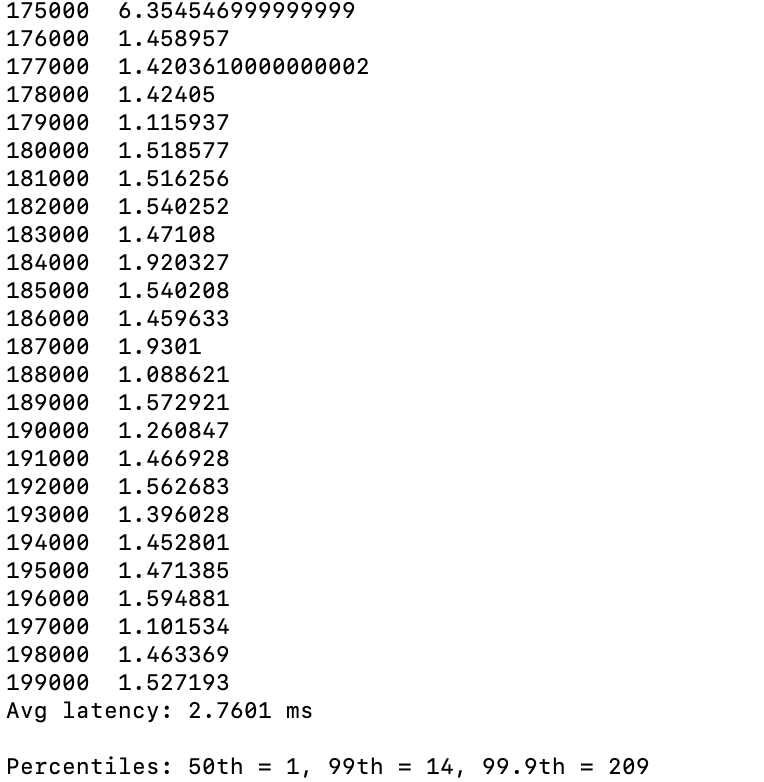 The topic test_p12_r3 was created with 12 partitions and RF=3, producer acknowledgements were set to all, the highest durability. We got the average of 3ms latency at 1KB message size.

Apache Kafka and RabbitMQ are two pub/sub systems, RabbitMQ is a general-purpose message system that supports protocols including AMQP and MQTT. Now it is also being used for streaming use cases. VMware Tanzu RabbitMQ provides all the messaging and streaming capabilities of RabbitMQ in an enterprise-grade supported distribution. It includes a validated, production-ready container image, warm standby replication to keep their schemas and message in-sync. Kafka is a durable message broker that enables applications to process, persist and re-process streamed data. While the Venn diagram of use cases, these two technologies could fulfill was very tight, you would analyze their differences and also consider the skills needed to operate the services and the developer communities and then decide which of the two best fits your use case.

For more information about Tanzu RabbitMQ, you can explore the following resources: