Real-time applications have become popular for optimal digital experiences. However, many organizations struggle to build these real-time applications because they are unable to access and leverage the massive amount of data sprawled across traditional and next -generation infrastructures. The Confluent Platform and VMware vSphere® with VMware Tanzu™ bridges infrastructure silos and empowers developers to consolidate various data sources for their modern apps. It also allows developers and IT operators to rapidly deploy and scale Apache Kafka and the underlying infrastructure with resiliency and security.

Accelerate Your Business with Modernization

The Confluent Platform is an enterprise-ready platform that complements Kafka with advanced capabilities designed to help accelerate application development and connectivity as a collection of infrastructure services, tools, and guidance for making all of your company’s data readily available as real-time streams.

Benefits of Running Confluent Kafka on vSphere with Tanzu

vSphere with Tanzu makes it easy to deploy and manage workloads. See Virtual Machine Class Types for Tanzu Kubernetes Clusters for the supported virtual machine classes for vSphere with Tanzu.

You can follow the vSphere with Tanzu Quick Start Guide to set up the supervisor cluster and create a Tanzu Kubernetes Grid cluster that is used for the Confluent Kafka cluster deployment. 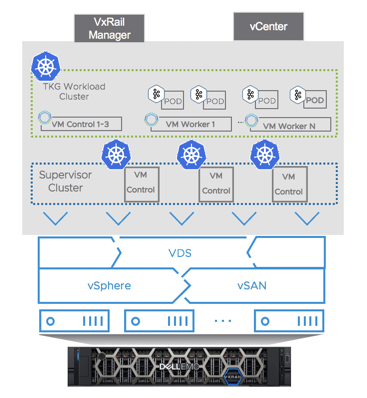 After deploying Kafka cluster successfully on vSphere with Tanzu, we can validate performance, monitoring, and use cases. For more details about the Running Modern Applications with VMware vSphere with Tanzu reference architecture, visit the following link: https://core.vmware.com/resource/running-modern-applications-vmware-vsphere-tanzu.