Since VMware vSphere 6.7 Update 1, VMware expanded its array of supported hardware accelerators by introducing support for the Intel® Arria® 10 GX Field Programmable Gate Array (FPGA) devices. This blog post zooms in on what an FPGA is, what the generic FPGA architecture looks like and how to expose an Intel® Arria® 10 GX FPGA to workloads running on vSphere.

FPGA devices have been around for decades, for example in industrial automation or in the automotive industry. Today, the FPGA is finding its way into the data center. We now have the ability to utilize these devices for our workloads.

Zooming in on the Intel® Arria® 10 GX FPGA, the following high-level architecture is used. Most noticable is the FPGAs main chipset containing the logic elements. The number of logic elements set the limit for the digital circuits as designed by developers. The Arria® 10 GX FPGA comes with networking interfaces as well, allowing to remotely connect to the FPGA.

To use the Intel® Arria® FPGA with VMware vSphere, version 6.7 Update 1 is required. DirectPath I/O is the only supported method today. This means that the hardware address of the PCIe device (the FPGA in this case) is directly exposed in the virtual machine. Using DirectPath I/O will introduce constraints on vSphere features like vMotion and DRS because of the one-to-one relationship between the PCIe device and the virtual machine. However, it will provide near bare-metal performance characteristics. VMware Infrastructure administrators can now make this programmable hardware accelerator available in VMware vSphere virtual machines. 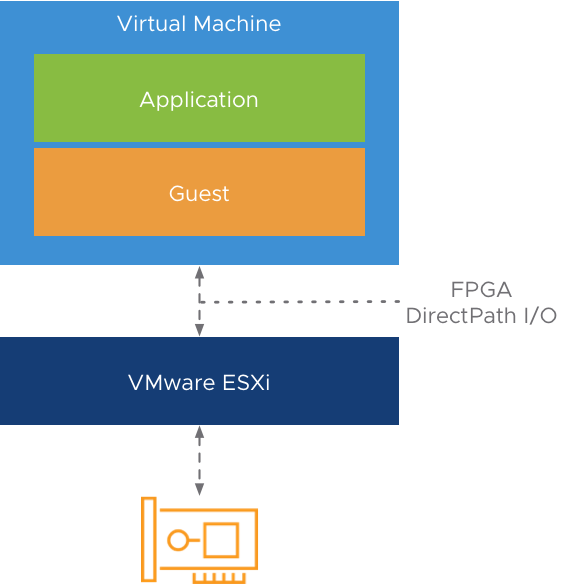 To verify your ESXi host on FPGA device availability, you can check the vCenter Server UI under Hardware > PCI Devices. The Intel® Arria® FPGA will list as an Intel® Processing accelerator.

Another way to check the presence of an FPGA device in an ESXi host is to issue the lspci |grep -i accel command. This requires root access to the ESXi host.
This will output a similar entry like this:

Once DirectPath I/O (also referred to as Passthrough-enabled Device) is enabled for the FPGA device, you can add a new PCIe device using the FPGA to a virtual machine. You are now set to use the FPGA device. Check the instructions in the Acceleration Stack Quick Start Guide for Intel® Programmable Acceleration Card with Intel® Arria® 10 GX FPGA on how to utilize the FPGA.

Check out the following VMworld video by Intel® to learn about their FPGA device running in vSphere, what the performance impact is and how vMotion can still be used when using remote connections to the FPGA device.