vVols has been the primary focus of VMware storage engineering for the last few releases, and with vSphere 8.0, it is no different. The biggest announcement in vSphere 8.0 core storage is adding vVols support in NVMeoF. Initially, we will support FC only but will continue to validate and support other protocols supported with vSphere NVMeoF. This is a new vVols Spec, VASA/VC framework – VASA 4.0/vVols 3.0.

The reason for adding vVols support to NVMeoF is many of the array vendors, and the industry, are moving towards using or at least adding NVMeoF support for better performance and throughput. Subsequently, VMware is making sure vVols remains current with the latest storage technologies.

Another benefit of NVMeoF vVols is the setup. When deploying, once you register the VASA, the underlying setup is completed in the background, you only need to create the datastore. The virtual Protocol Endpoints (vPEs) and connections are all handled by the VASA, simplifying the setup.

With NVMeoF, the implementation of vVols is a bit different. With traditional SCSI based vVols, the Storage Container is the logic grouping of the vVol objects themselves. With NVMeoF, this will vary depending on how the array vendor implements. But in general, at the array, an ANA Group is a grouping of vVol namespaces. The array decides on the number of ANA Groups, each having a unique ANAGRPID within the NVM subsystem. Namespaces are allocated and active only on BIND request to the VASA Provider (VP). Namespaces are also be added to an ANA Group on a BIND request to VP. A namespace remains allocated/active until the last host UNBINDs the vVol.

With traditional SCSI based vVols, the Protocol Endpoint (PE) is a physical LUN or volume on the array and shows up in the storage devices on the hosts. With NVMEoF vVols, there is no physical PE, the PE is now a logical object representation of the ANA group where the vVols reside. In fact, until a VM is powered on, the vPE doesn’t exist. Array decides on the number of ANA Groups, each having a unique ANAGRPID within the NVM subsystem. Once a VM is powered on, the vPE is created so the host can access the vVols in the ANA group. You can see in the diagram the vPE points to the ANA group on the array.

Each vVol type (Config, Swap, Data, Mem) created and used by a VM will create an NS that resides in an ANA group. It’s 1:1 vVol to NS ratio. This allows vendors to scale vVols objects easily. Typically, vendors support thousands to even hundreds of thousands of NS. The NS limits will be based on the array vendor.

Here in the diagram you can see the VM itself is a NS, this would be the Config vVol, and the disk is another NS, a Data vVol. 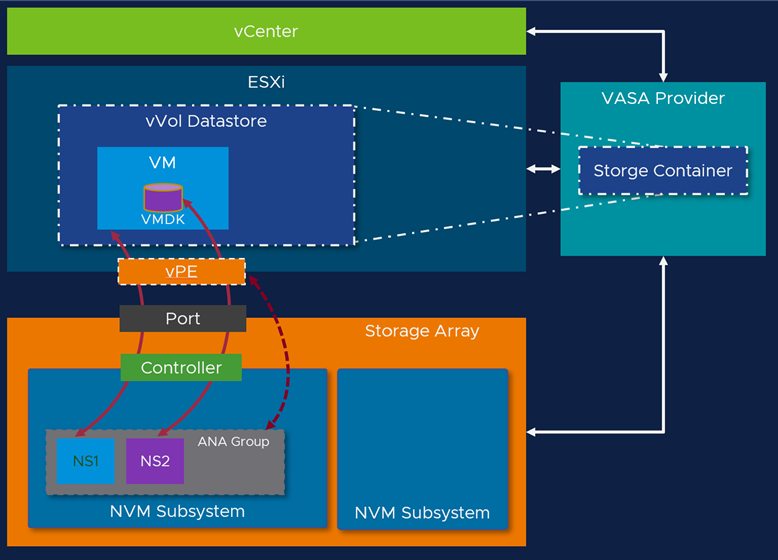 NVMe over Fabrics (NVMeoF) continues to gain popularity for obvious reasons. Higher performance and throughput over traditional SCSI or NFS connectivity. Many storage partners are also moving to NVMe arrays, and using SCSI to access NVMe flash is a bottleneck for the potential gains.

•Continuing to add features and enhancements, VMware has increased the supported namespaces and paths for both NVMe-FC and TCP.

Support NVMe reservation commands to enable solutions such as WSFC. This will allow customers to use Clustered VMDK capability for use with Microsoft WSFC with NVMeoF Datastores. Initially FC only.

ESXi sends a multicast DNS (mDNS) query requesting information from entities providing (NVMe) discovery service (DNS-SD). If such an entity is active on the network (on which the query was sent), it will send a (unicast) response to the host with the requested information - IP address and port number where the service is running.

Changes in how the vVols swap is provisioned/destroyed have helped to improve power on/off as well as vMotion and svMotion performance.

The config-vvol is where the VM’s home data resides. (vmx, nvrams, logs, etc.) and is usually only accessed at boot or change. Previously we did what was called a lazy unbind and unbound the config-vvol when not in use. In some cases, some applications periodically access the config-vvol and a new bind operation was required. Keeping the config-vvol bound reduces latency in accessing the VM home data.

Starting with vSphere 6.7 we added a feature to make the unmap rate configurable at the datastore level. With this enhancement, customers may change the unmap rate best suited for their array’s capability and vendor recommendation. The higher unmap rate has benefited many array vendors quickly reclaim space. But we heard from some customers, even with the lowest unmap rate of 25 MB/sec, the rate can be disruptive when multiple hosts send unmap commands concurrently. The disruption can increase when scaling the number of hosts per datastore.

To help customers in situations where the 25MB/s unmap rate can be disruptive, we have reduced the minimum rate to 10MB/s, configurable per datastore. 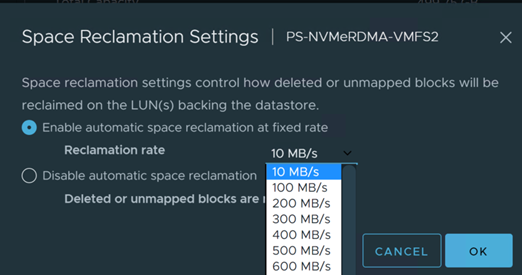 This allows customers to reduce the potential impact of numerous unmap commands being sent to a single datastore. If needed, you can also disable space reclamation completely for a given datastore.

The dedicated unmap scheduling queue allows high priority VMFS metadata IOs to be separated and served from separate schedQueues to prevent them from getting starved behind UNMAP commands.

Engineering is always working to enhance storage resiliency. In vSphere 8 we have added NFS enhancements increasing the resilience through services, checks and permission validations.